Drills for the Hills 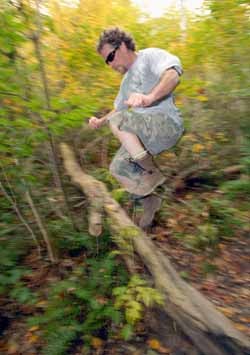 Whether you ride one plank or two, fat powder skis, skinny cross-country skis or climbing skis for earning your own turns, you know that skiing and snowboarding require a tuneup of the body along with the boards. So Seven Days asked some of the Green Mountains’ greatest how they get buff for the white stuff.

“Skiing’s a motion sport — there’s nothing stagnant about it. Running the Long Trail is great. I look for rocks, logs and other terrain differences to jump off or over so that I can work on my foot-eye coordination. I’m also on my mountain bike three times a week, and I’m a big fan of dirt bikes. And I usually ski somewhere in the southern hemisphere in August. This year it was Chile.”

“For moguls skiing, everything is an explosion: plyometrics and intervals with harder and shorter recoveries. In the summer I like to swim — I mix it with running for my cardio. When I run, I might only go 3 miles, but I’m trying to do 2 minutes at maximum and then rest. You also want to work on your abs; that’s where your power and balance comes from. And for moguls skiing, you feel like you’re doing squats all the way down the mountain, so you have to focus on your back, too.”

“For fitness, I do VO2 max intervals of rollerskiing or uphill running two to three days a week, with a 30-minute warm-up, four 7-minute intervals just above threshold, five minutes of recovery between intervals and a 20-minute cool down. For strength, it’s 20 minutes of plyometrics, plus Russian dead lifts, weighted pull-ups, explosive pull-ups and 30 minutes of working on the core with a medicine ball.”

“Never stop skiing — head to the Arctic, then to South America, and then you can come back East. Otherwise, we get out into the woods three or four times a week; my favorite thing is to pretend that the woods are full of snow and we’re skiing. By twisting and banking and jumping and running around the trails, you really work all the little muscles and maneuvers and recoveries you experience when you’re skiing. We swim like crazy, in the Mad River and ponds and lakes. And surfing is the ultimate training for skiing. There’s nothing that gets us closer to the feeling of sliding down the face of a snow-covered mountain than the act of sliding across the face of a breaking ocean wave.”

“I just delivered my second boy, Logan, so I’m not really in training yet. But a usual fall schedule for me would be going to the gym twice a week for an hourlong spin class to strengthen the legs and butt for the ski season, and then twice a week doing a one-hour boot-camp class. It’s circuit training that works the anaerobic capacity and builds muscle with lunges, squats, push-ups, jump roping and ab exercises. I was also doing at least one yoga and then one Pilates class to make sure that my core was strengthened. A weekend activity was hiking Jay. I felt really great and strong for the ski season.”

“To get in shape for the season, I go to the gym every day and ride my bike.”

“I road bike as long as I can keep my fingers and toes warm. Inside, I like to do a Pilates-inspired workout that starts with light aerobic bits and pieces followed by floor work with an emphasis on core, legs and some upper body. We also worked with Geoff Regan at Poulin Performance to put together an excellent pre-snowkite-season, three-month program with weights and the stability ball — you can see some of the workouts at http://www.stormboarding.com. From all this, last year I had more longevity on the slopes and no sore stomach muscles on the first day of jumping with the kite.”

“My favorite thing is to run up Sugarbush. I run up the mountain once a week alternating between Mount Ellen (record: 39 minutes) and Lincoln Peak (36 minutes). I run the work roads. Not only is it a great cardio workout, as your heart rate hovers right at anaerobic threshold, but also your legs get wicked strong. Even the downhill portion works the legs. I love being up on the ridge of the Green Mountains, breathing the fresh air and enjoying the awesome views.”

“Around the fall I like to fill up truckloads of snow from the local hockey rinks and practice snowboarding on rails at my house in Monkton. I also do a lot of leg work at the gym and eat healthily.”

“One of my favorite gym exercises is a push-up, pull-up routine in which you do a certain amount of push-ups and then hop right up to the bar for pull-ups. Start with low reps until it gets easier, adding a set each week or so: five push-ups, three pull-ups; six push-ups, four pull-ups, etc. Core stability is key when you’re [skate-skiing] or striding out classic skiing. Lie down with your back on a foam roller with your arms out and your lower abs tucked in, keeping your back flat along the roller. Then lift each leg, one at a time, into the air; hold it and bring it down.”

“The best way to prepare for the season is by skiing. For the past five years I’ve traveled to South America in August and September for training. If skiing is truly not an option, I try to stay fit by road biking through the beautiful hills and amazing foliage that Vermont offers.”

“The best way to get in shape is to be outdoors playing. The last few years I’ve really gotten into road biking, and then, this summer, I started mountain biking as well. I spend a lot of time in the gym working out my legs, but being outside is so much more enjoyable.”

“Throughout the summer I’m doing a lot of strength training. In the fall I still do strength work but move my focus a little to working on my aerobic system. I spend a lot of time on the bike, monitoring my heart rate closely to achieve optimal results.”

“I’ve never been what you’d call a fitness nut. If I do get inspired, I’m content to run through the neighborhoods of Burlington two or three times a week. If I’m going to work out, there has to be some fun involved. I play hockey twice a week, starting about now, and I find that to be great cross-training. Ironically, hockey’s a great low-impact workout. We go pretty hard, but it’s rare that anyone gets hurt. And it’s anaerobic in nature — 1- to 2-minute bursts, then rests — like skiing.”

“Mountain biking and motocross help with choosing lines in snowboarding, while wakeboarding and wakesurfing use the same muscles as snowboarding, with similar tricks. Golf helps with the mental side of things, and I also lift weights at the Spring House at Okemo’s Jackson Gore — that helps me to become stronger and prevents injury.”