Drifting Inside a Sensory-Deprivation Tank 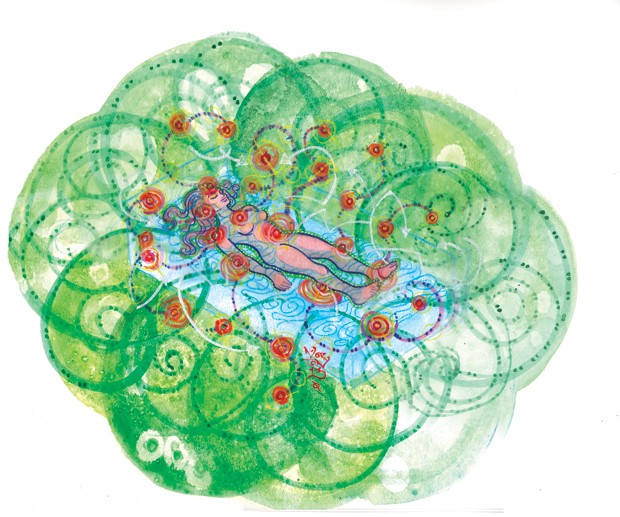 Recently I drove to Shelburne’s Satori Float and Mind Spa and tried out Vermont’s first flotation tank commercially available to the public. In the course of a few hours, I lost track of the boundaries of my body and did a mental reboot of my five senses.

A flotation tank — also known as an isolation tank, sensory-deprivation tank or “restricted environmental stimulation therapy” tank — is perhaps the closest possible simulation of being in the womb. You float naked and weightless in complete darkness, enveloped in a salty solution, hearing only the sound of your own breathing and heartbeat. But, unlike in the womb, you can add a musical soundtrack.

My one previous “float” occurred in the mid-1980s while I was a student at Northwestern University. Friends and I sought out a then-new Chicago spa called SpaceTime Tanks, which is still in operation today. Like many of its customers, we were curious about experiencing a tank similar to the one portrayed in the 1980 sci-fi classic Altered States.

The movie, based on a novel by Paddy Chayefsky, tells the story of Harvard brain researcher Edward Jessup (William Hurt). Having ingested a powerful hallucinogen obtained from an indigenous Mexican tribe, he climbs inside an isolation tank to explore the origins of human evolution stored in his DNA. Jessup eventually transforms into a proto human ape who rampages through Boston and ends up in a zoo, where he kills and eats a lamb.

My first experience in a flotation tank involved no physical transformations, hallucinations or carnivorous behavior. In short, I was underwhelmed. Still, I was eager to try one again and see how much the technology, and my own mindset, had changed in three decades.

The office suite that houses Satori shares a building with a daycare center and is sandwiched between an occupational therapist and an Aflac insurance office. At first glance, it seemed like an improbable spot for channeling my inner gorilla.

Inside, I was greeted by the owner of the new business, Rahn Bouffard, who exuded just the right level of chill vibes. Bouffard spent 28 years in the financial-services industry before burning out, he said. A longtime meditator with a keen interest in alternative and holistic healing, he took two years to get trained in massage, traditional Chinese medicine, yoga and “energy-based” therapies. At 56, he could easily pass for 10 years younger — a testament, perhaps, to the rejuvenating powers of his new career path.

Bouffard gave me a quick tour of the Satori spa, which didn’t take long, as it’s only two rooms. The décor was warm and mellow, without tipping the scales into New Age kitsch. Appropriately dim and diffuse lighting illuminated an entrance room partitioned by several Chinese screens. On one wall hung a psychedelic painting of someone in the lotus posture. Coincidentally, the artist, Alex Grey, had also illustrated the cover of a book I was reading that week, DMT: The Spirit Molecule.

One screen hid what I initially assumed was an ordinary massage table. In fact, Bouffard’s website describes it as a “state-of-the-art sound healing and inner-space exploration platform.” A client lies down on the table, fully clothed, puts on headphones and listens to “brainwave entrainment” meditation music. As the music plays, the “vibro-acoustic” massage table sends physical pulses reverberating into the body.

“I was also a sonar technician in the U.S. Navy, so I have a keen interest in the power of sound,” Bouffard explained.

With the table comes a pair of “hemi-sync light glasses” that flash colored lights, strobe-like, onto the client’s closed eyelids. Like the sounds, they’re supposed to induce the slower brain waves associated with meditation, trance and hallucinatory experiences.

Bouffard recommended 30 minutes on the table, followed by one hour in the tank. “It’s a great way to jump-start the relaxation response,” he said. After a couple of failed attempts at similar businesses, Bouffard is hoping the tank/table combo will attract clients, given that the nearest other flotation spa of its kind is in Montréal.

As I was there for the full mind-body travel package — $65, comparable to an hourlong massage — I agreed to try both. It made sense to heed the navigation of a former Navy seaman, who should know his way around water.

On the table, I wasn’t a big fan of the light goggles; my eyes get enough pulsating stimulation staring at a computer screen every day. But the vibro-acoustic table and headphones were very relaxing. After a half hour of Pink Floyd-like synthesizers “entraining” my nervous system into a soft, gelatinous goo, I was primed for the tank.

Bouffard led me into the back room. “So this is the main attraction,” he said, pointing to a large, white metallic box. Slightly wider than a twin bed, about 8 feet long and 5 feet high, it had buttons on top, a CD player and a filtration system at one end.

The lightproof, soundproof tank was built by the Samadhi Tank Company, which began selling them to the public in 1972. The company’s founder, John Lilly, was a neuropsychiatrist who developed flotation tanks in the 1950s as a way of researching how the brain functions when starved of external stimuli.

Bouffard opened the lightweight door at one end. The tank has no latch or seal to lock someone in. It does feature an internal heater, in case the air gets chilly, and a light switch for users who become disoriented or panicky.

Bouffard told me that the tank’s bottom holds a mere 10 inches of water kept at skin temperature — 93.5 degrees Fahrenheit. Eight hundred pounds of dissolved Epsom salt give the water the consistency of olive oil, allowing you to float like a cork and creating the sensation of weightlessness.

After filling out an intake form, Bouffard walked me through a checklist for “first-time floaters.” I’d need to remove my contact lenses, then shower and shampoo thoroughly to remove any hair products, makeup or deodorant that might contaminate the water. After my float, the water would be filtered and disinfected with oxone and hydrogen peroxide; no toxic chemicals, such as chlorine, are used.

The shower stall contained a bottle of white vinegar and rubbing alcohol solution with which I’d rinse out my ears afterward to prevent swimmer’s ear. Bouffard provided ear plugs and goggles to keep the salt out of my head.

“Some people find the goggles distracting, but I like to have them on,” he said. “It’s your call.”

Bouffard also offered me a foam-rubber head brace. While it’s nearly impossible for your face to become submerged accidentally in the tank, even if you fall asleep, some people have trouble relaxing and prefer the floating head support. I declined it.

Next, Bouffard handed me a tube of petroleum jelly to cover any nicks or cuts I might have. Surrounded by all that salt, even a tiny paper cut would burn like a bee sting if unprotected. Bouffard warns clients not to shave or wax their bodies before floating. And not to drink caffeine.

The reason for that precaution was clear from Bouffard’s final request before leaving the room.

“Please do not urinate in the tank,” he emphasized. “It’s amazing I have to tell people that.”

I undressed, showered, put in the ear plugs, donned the goggles and slipped slowly into the briny abyss.

Inside, the tank was tall enough for me to sit upright without banging my head. I shut the door and lay flat on my back. Instantly, I bobbed to the surface as water surrounded my face, arms, legs and torso. It was unlike my usual experience of trying to float in a pool or ocean, in that staying on the surface was effortless. And, despite my aversion to enclosed spaces, I felt not a hint of claustrophobia.

Bouffard had declined to tell me what to expect, explaining that “there’s a real benefit to just being still with whatever shows up.” Floating, he said, is like any other form of meditation — a process, not a one-time fix.

It took me a few minutes to still my body and mind. Initially, the air felt stuffy, and my body bumped gently into the walls. But after a short time, I established a physical and mental equilibrium and lost track of where my skin ended and the water began. The soundtrack Bouffard had recommended for my float — a CD of Tibetan singing bowls — was just the ticket for quieting my thoughts.

After 20 or 30 minutes — it was difficult to gauge time in the tank — I experienced a weird sensation. As I lifted one arm, my center of gravity shifted, my body turned slightly in the water, and I was suddenly reoriented to which direction was up. It was amazing how quickly my inner gyroscope had been scrambled.

It’s not until you’re immersed in a sensation-deprived environment that you realize how active and chaotic your mind can be. As my thoughts rippled in random directions, I recalled a conversation about Plato I’d had with a social studies teacher back in high school. Next came a string of long-forgotten memories from nursery school, then an image of a meal my mom made me when I was a child.

When my hour was up, the music clicked off and the filtration system turned on, signaling that it was time to get out. I showered again, dressed and returned to the front room.

“How was it?” Bouffard asked with a grin. Evidently, he knew the answer already from the smile on my face.

I stepped outside into a gorgeous fall evening. After depriving my senses of external stimuli for one hour, I was now acutely attuned to them: the wind rustling in the leaves, the smell of freshly mown grass, the dusky glow of sunlight illuminating the clouds. Going in, I’d assumed I’d feel tired after an hour flat on my back. Instead, I felt invigorated, awake and alive. Clearly, floating isn’t about “zoning out,” but about zoning in.

Ordinarily, I’d listen to National Public Radio on my drive home. Instead, I opened the sun roof and threw in a David Gilmour CD. Being stuck in traffic on Shelburne Road never felt so blissful.