Dreaming of the HGTV Dream Home in Warren 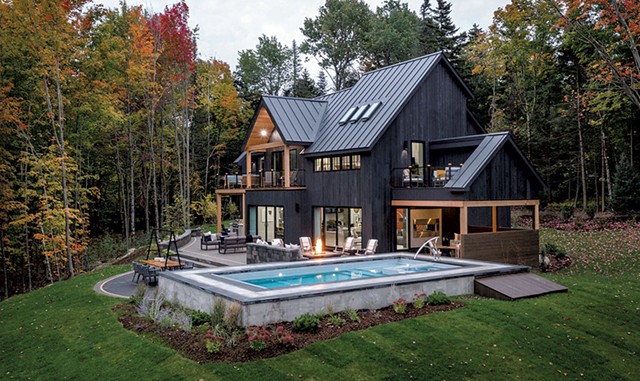 Clearly, I'm not alone in my fascination with spying on strangers as they debate city versus country, move-in-ready versus fixer-upper or white versus dark kitchen. (It's OK, fellow "House Hunters" fans. You can come out of the walk-in closet.) So far, though, the show hasn't become my gateway to other HGTV programming. I've resisted the charms of "Love It or List It," "Flip or Flop," "Rehab Addict" and similar shows.

It's a Scandinavian A-frame ski lodge on steroids. tweet this

This year's house is in Warren, Vt., within spitting distance of Sugarbush Resort. It's actually the second Dream Home built in the Green Mountains: The 2011 house is in Stowe. Because of course it is.

The Warren house comes fully loaded, decked out with furniture and décor chosen by show host and Atlanta-based interior designer Brian Patrick Flynn, with help from Los Angeles designer Breegan Jane. The sweepstakes winner receives the house, a 2022 Jeep Grand Wagoneer and $250,000 from Rocket Mortgage — all told, a prize package worth more than $2.4 mil. Contestants can enter twice daily — once each at hgtv.com and foodnetwork.com — until February 17.

Owing in equal measure to a New Year's Eve hangover and the house's Vermont location, I was powerless to resist "HGTV Dream Home 2022." What follows is my running diary of the hourlong special, which aired on January 1 at 8 p.m. and is currently streaming on demand.

You can tell it's an HGTV show by the upbeat intro music that sounds like something you know, but not quite — the musical equivalent of store-brand cereal. We open on aerial shots of verdant mountains and rolling foothills under bluebird skies. It's Vermonty AF. All that's missing is a covered bridge and a cow.

"Vermont," Flynn declares as we move along Route 100. "The word combines the French vert and mont to mean 'green mountain.'" Just like that, we get a covered bridge and a black-and-white Bessie in a field in rapid succession. Well played, HGTV.

"But around here," Flynn continues, "green is only half the story."

The images turn quickly to rusty, panoramic visions of fall.

"It is a dream!" Jane exclaims over footage of a rippling creek flanked by red, yellow and orange trees.

"A dream you can live for yourself," Flynn promises as we get our first glimpses of the house, whose architectural style I'd describe as fucking bonkers.

Flynn describes the gazillion-square-foot manse as "cabin chic," which ... sure. As he introduces the team of designers and builders, my girlfriend asks what I would do if I won the Dream Home.

"I dunno. Sell our house and live there, I guess?" I respond.

"I'd keep our house and rent out that one," she counters.

As Flynn reveals the cash prize, I realize the folly of my answer and the genius of hers.

A quarter million sounds like a lot of money — and it is. But, between property taxes, insurance, utilities and upkeep, whatever is left of that $250K after taxes might not go far in maintaining a $2 million home. We would have to Airbnb the house to cover expenses, I suggest, or sell it once the prize money ran out.

"We could at least throw some ridiculous parties first," she says. And I'm reminded once again of why I love her.

Over more familiar-ish incidental music and footage of mountains, a barn, a gorge and sailboats on Lake Champlain, Flynn says the Dream Home "is in one of the most incredibly beautiful places in the United States." Truth.

Flynn explains that he's brought in Jane, who has some familiarity with Vermont, to help him get to know the area, which will inform his style choices for the house. After riding a ski lift to the top of Sugarbush to gaze upon the Mad River Valley in springtime, the two of them make a critical discovery: Vermont is green.

"I think green is our thing," Flynn observes.

Later, after Jane raves about the state's general stores, the duo visits the Warren Store to ogle Vermonty stuff — Stephen Huneck prints! Socks! They also take note of the store's rustic architectural details, such as a trapdoor to the basement and the rusted metal of an ancient woodstove that they'll incorporate into the Dream Home.

I want to skewer the preciousness of it all ... until I realize that I recently did the same thing at a Middlebury store, thinking about charming décor for my own house.

Much of the next half hour or so focuses on the design and construction of the house. It's interesting, but here's all you really need to know: It's a Scandinavian A-frame ski lodge on steroids whose roofline mimics the mountain ridgeline. And the outdoor living spaces are bananas, including a heated pool and hot tub, several dining/lounge areas, and an outdoor kitchen that's nicer than my indoor kitchen.

Around the nine-minute mark, HGTV serves up the obligatory statistic about Vermont maple syrup: We make a shit-ton of it.

My favorite parts of the show are when Jane guides Flynn around Vermont. They make a fun pair, and I'm a sucker for spying recognizable landmarks on-screen. It's kinda like trying to find your house when you fly into BTV — you know you've done it.

On a chartered sailing excursion with Burlington's Whistling Man Schooner — note to self: Do that this summer — and a stroll on Church Street Marketplace, Flynn suggests that he'd spend most of his free time in the Queen City if he lived in the Dream Home.

He'd actually spend most of that time in the car, because it's about a two-hour round trip. Note to whichever flatlander wins the house: Burlington and Lake Champlain are not especially close to Warren.

Another note to the Dream Home winner: Vermont weather really is as moody as it appears in the picnic scene. Jane sets up a lavish spread in a field to discuss decking samples with Flynn under blue skies, only for a freak downpour to wash it out moments later.

I know Vermonters can be insufferable about buying/eating/drinking/shopping/every-damn-thing local, but here's something that bugged me. Flynn beams as he touts a unique wall application installed by a team of woodworkers ... from Indianapolis. Unless I missed something, no one working on the house appears to be local.

HGTV couldn't have found builders or craftspeople in Vermont to do some of the work? It's not like we have a shortage of high-end homes or people who build them.

With construction nearly complete, Flynn homes in on light fixtures, furniture and other finishing touches. Which, in the spirit of incorporating all those Vermont elements he's been praising, he sources from a spunky little mom-and-pop operation called Wayfair. Sigh.

By now, it's clear that the show is partly a glorified commercial for HGTV partners such as Trex decking, Sleep Number beds and Lowe's. Maybe that's how it's possible to give away a $2 million house?

Snarkiness (mostly) aside, the grand unveiling is astonishing. Flynn's "luxury cabin" really is the stuff dreams are made of. He did an admirable job evoking certain idealized aspects of Vermont in his interior design elements, from the striking sage-green kitchen cabinets to the faux deer antlers over the double-sided fireplace. He even orients furniture to take advantage of the house's greatest asset: Vermont itself.

Which makes me think that maybe, just maybe, the real Vermont dream home is the one we've had all along...

No, it's definitely the one in Warren.

See a video tour and enter the HGTV Dream Home 2022 sweepstakes at hgtv.com and foodnetwork.com.

The original print version of this article was headlined "Home, Sweet F'n Home"