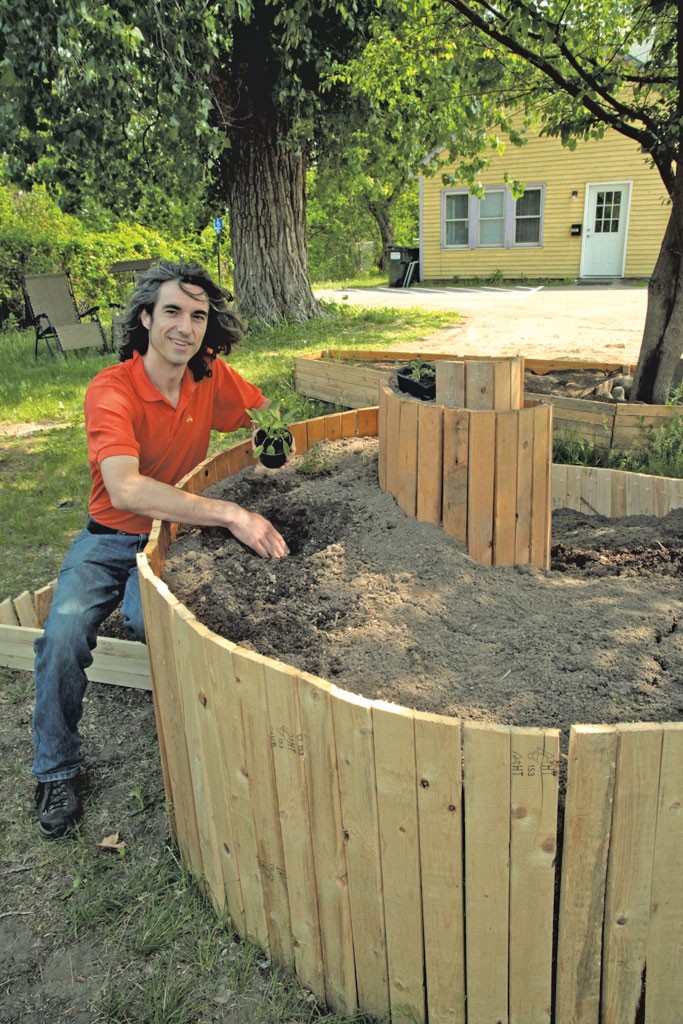 From the outside, the Soteria Vermont house on Burlington's Manhattan Drive isn't particularly noteworthy. With faded yellow clapboards and purple trim, it blends right in with other houses in the neighborhood.

What's going on inside, however, sets it apart.

The first of its kind in Vermont, Soteria is a five-bed mental health treatment facility that focuses on relationships — rather than medication — in a homelike environment. It isn't run by mental health professionals, and the doors aren't locked. There's a music room, a library, a space for arts and crafts, and a garden. Aside from mealtimes, days at the Soteria Vermont house are unstructured; residents are free to walk the neighborhood, shop or attend classes.

Opened in April, Soteria has two residents, with applications pending for the three other slots. "We are dealing with, generally, younger people," house manager Jason Young said. "Right now, with just two residents, it is a fairly quiet house." The 14 members of Soteria's care team work 12-hour shifts, with at least two staff members available at all times. Residents aren't assigned to specific staff members: Developing relationships naturally is key to treatment.

"Soteria is a place where people can have some time in a safe space to work through crisis," states a blog entry on Pathways Vermont, the home's sponsoring agency. "A place for someone to figure out for themselves what they are experiencing — with the option to receive some input and suggestions when asked for."

The Soteria model has been discussed in Vermont's mental health circles since the 1990s. "It has been this ideal, this dream to have in Vermont for a long time," said Rep. Anne Donahue (R-Northfield), a mental health advocate and watchdog.

In 2011, that dream started to take shape. Tropical Storm Irene flooded and closed the antiquated state psychiatric hospital in Waterbury, forcing policy makers to establish a new vision for the state's mental health care. The replacement plan, set out in a 2012 law, approved funding for an alternative to traditional treatment, said deputy mental health commissioner Frank Reed in a recent telephone interview. Next year's state budget includes $1 million for the Soteria Vermont house; residents pay nothing for stays expected to run three to six months.

Though the state has been opening new residential programs in an effort to reduce the need for state acute-care beds, the Soteria provision was more about choice, according to Donahue. "I don't think it is hugely important in terms of reducing hospitalization, but it is saying there are other modes of treatment," she said.

The first Soteria house — named for the Greek word meaning salvation, hope and deliverance — opened in 1971 in San Jose, Calif., as research experiment by social worker Voyce Hendrix and psychiatrist Loren Mosher. Funded by the National Institute of Mental Health, the project showed promise: Residents recovered as well as or better than a control group treated for severe psychosis in psychiatric hospitals.

It also met with skepticism. The psychiatric establishment felt that drug-free treatment was naive — even dangerous — so the project lost funding and had to close.

In 2004, Mosher and Hendrix wrote a detailed account of their experiment in the book Soteria: Through Madness to Deliverance. It inspired a new generation of believers — in Vermont and in Alaska, where a Soteria house has been operating since 2009.

"We do use the original Soteria and Alaska as guideposts," said Amos Meacham, director of the local project.

According to its certificate-of-need application, the Soteria Vermont house is intended to serve individuals experiencing their first "break." The term describes a psychotic experience with symptoms such as delusions and hallucinations. But Bob Bick, executive director of the Howard Center, predicts that Soteria will have to welcome individuals who "started on a traditional intervention" but want to try a new option. "There is a question whether there will be enough clients who meet the first-intervention criteria," he said. "We have had patients who are clearly not enamored of medication."

The Soteria Vermont house blog suggests the staff have already revised the admission policy. "We would like to clarify who we can accept as residents at Soteria," it states. "Some ... will have no previous exposure to mental health services, while others may already have an extensive history."

Meacham said applicants may already be taking medications, or may choose to do so after they come to the house. "We take a neutral position on medication," he said. Still, he added, many people "are looking to minimize or avoid reliance on medications." And they are seeking to avoid hospitalization. So he expects to find plenty of candidates for Soteria's brand of care: "I'm not worried. There is plenty of need out there."

The challenge now is getting the word out to the professionals who might refer residents. "In terms of the people we are connecting with, it is not just Howard Center and the emergency room," Sisson said. "We are approaching primary care providers, the NAMI-VT [National Alliance for the Mentally Ill-Vermont] and counselors at colleges."

Meacham, who has quarterbacked the project, hoped Soteria would open in early 2014. However, when he filed for approval with the Green Mountain Care Board in the fall of 2013, the Howard Center and the City of Burlington sought interested-party status, which bumped the project from the fast track.

The board denied Burlington's request, noting that its worries — about public safety and the use of city resources — applied to every kind of development. The Howard Center withdrew its request once Bick learned more about the project. "We are on the same side," Bick said, "which is to offer options."

Sandra Steingard, a psychiatrist and medical director at the Howard Center, is working as a consultant at the Soteria Vermont house. She got involved because she's started to question the long-term benefits of antipsychotic medications and wanted to investigate the alternative approach firsthand.

"I am by no means anti-drug," said Steingard, who has prescribed antipsychotic medication for much of her 30 years in practice and said she has seen few examples of people recovering from psychosis without them. But "I want to remain open," she said about Soteria's method of emphasizing relationships over medication.

Soteria's strategy involves another unconventional approach: None of the staff are doctors or nurses. "Soteria takes a nonprofessional approach, which is not to say non-trained," said Pathways spokeswoman Laura Nicole Sisson. Last winter, staff members were taught how to build relationships by "showing themselves in a way that can build connections" so an individual in crisis "doesn't feel so alone," explained Meacham.

Staff members come from diverse backgrounds: Some have had their own mental health experiences; several have worked in social services. The mix of interests and life experiences are important, house manager Young said, "Because you don't know who is coming in."

Young spent most of his adult life working as a "serial craftsman" — restoring antiques, building homes and furniture — before he discovered that his calling was to help people. In the past five years he's worked at several mental health and substance abuse treatment facilities.

Last fall, he saw an ad for a house manager for Soteria and jumped at the chance. "Designing and building a program — I don't think a lot of people get to do that," Young said. He read Mosher's book, and it made a lasting impression. "If you believe in people ... that they are strong and have dignity, those positive assumptions could be very powerful," Young said.

But he never imagined he'd help bring Soteria to Vermont. "It just felt too good to be true," he said — "something that perhaps could only happen in California in the '70s."