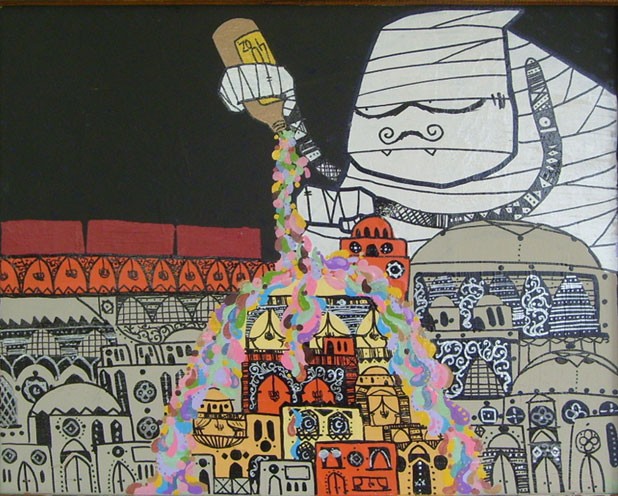 The "New York Graffiti Field Identification Guide" located at Gridskipper.com lists Faro among the city's "most recognizable artists." The site explains: "Though much of his work is featured around SoHo and Manhattan's Lower East Side, he has yet to make commercial inroads. That may not be his goal." On the other hand, maybe it is.

Faro has certainly achieved commercial success here in Burlington - red dots indicating "sold" abound in his solo show at Pursuit Gallery. His energetic exhibition brings a big-city aesthetic to the shores of Lake Champlain. While Faro comes from the murky, illegal world of graffiti, at Pursuit he's making his mark as a gallery artist, and his vision has depth. This is his first solo show, but it probably won't be his last.

Faro is originally from Egypt, but his graffiti have appeared in New York, New Jersey and Texas for the last three years. Online images of his work in situ indicate that on his home turf he typically spray paints in a dashed-off fashion. But he's developed a strong personal iconography that includes a signature mummy character, pyramids and flattened village scenes with Middle Eastern architectural details. Translated into fine art work, Faro's images are painted with confidence and deliberation.

"Night to Day" is a monumental, 46-by-90-inch triptych presenting one of those fanciful villages. Minarets jut above the crowded town, and hot-air balloons drift overhead. A massive pyramid looms over the village. Faro's pyramids always sport a large, all-seeing eye on their lateral surfaces, rather than hovering above like the similar image on an American one-dollar bill. Unlike his graffiti, Faro's gallery images are alive with varied geometric shapes that fit neatly together like puzzle pieces. His mummy character, ostensibly a symbolic self-portrait, is reminiscent of Philip Guston's (1913-1980) cartoonish characters from the 1970s.

The 22-by-27-inch "Coming to the Big City" portrays an oversized mummy figure at upper right, pouring color onto a black-and-white Middle Eastern-looking town. Faro's organization of lights and darks - the mummy is pure white, the unpainted segments of the village red or tan - shows him to be either a well-schooled or a brilliantly intuitive designer.

The show's 26 paintings range in size from the aforementioned triptych to works as small as 4 by 6 inches. The 16-by-20-inch works on paper have some of the spontaneity of Faro's street art. "You Are a Victim of the Rules You Live By" and "Abuse of Power Comes as No Surprise" are side-by-side paper pieces in which the title texts are superimposed in black on rows of pale rose-colored patterning. A monster head is drawn over Arabic script in "Abuse of Power." Faro allows his lettering to drip, and his preferred medium for creating that effect is quick-drying Krink ink marker - a product apparently created and marketed with graffitists in mind.

Most of the works on paper in the exhibition incorporate written passages. "Class Action Is an Idea With No Substance" presents the words in fancy cursive layered over images of faces and interspersed with diamonds and dollar signs.

Whether we experience the air of anarchy surrounding Faro's exhibition - and New York City graffiti culture in general - as real or ersatz probably depends on the artists' motives and their success in garnering mainstream attention. Once in galleries - where they're often featured with trendy products - graffitists enter the world of commerce just like any other art stars. Faro seems poised on the edge of that kind of success. Maybe after he makes some serious money, his work will come into its own.