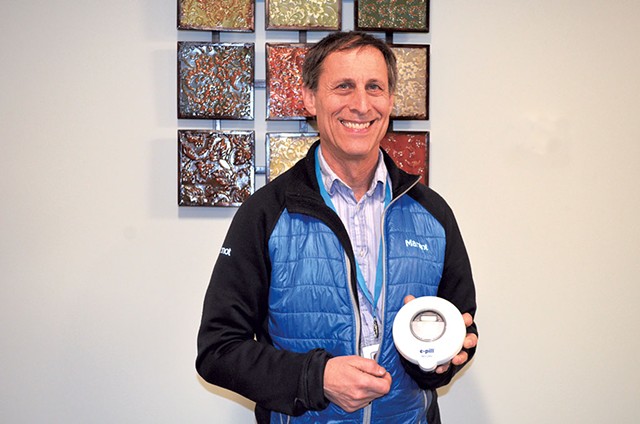 Dr. John Brooklyn hadn't yet arrived at the South Burlington opiate addiction treatment center when I showed up for a tour one afternoon in December. Walking briskly into the Chittenden Clinic's drab waiting room 10 minutes late, he apologized, explaining that he'd had to make a quick run to the post office to mail a batch of urine samples to a specialized lab in Germany.

The shipment was the latest experiment in addiction treatment by the energetic 60-year-old doctor. His name may be unfamiliar to the general public, but Brooklyn has arguably done more to combat Vermont's opiate epidemic than anyone in the state.

Brooklyn has been the medical director of Vermont's first methadone clinic since it opened in 2002. He's treated thousands of addicted patients, trained well over a hundred doctors to do the same, and played a major role in creating a treatment system so successful that several states are now trying to replicate it.

"There's almost nothing to do with medication-assisted treatment and addressing the opiate crisis that he hasn't had a role in during the last 20 years," said Tom Dalton, executive director of Vermonters for Criminal Justice Reform. "He's really been a force of nature."

Medication-assisted treatment is now widely accepted as the most effective way to address opiate addiction, but it was viewed skeptically for years. Vermont was one of the last states to open a methadone clinic in part because then-governor Howard Dean worried that treating patients with the medication — which is itself an opiate but blocks heroin highs — would simply replace one addiction with another.

That left addicted Vermonters with two options throughout the '90s: Drive every day to a methadone clinic in New Hampshire or Massachusetts, or participate in a study of buprenorphine, a drug that had not yet been approved by the U.S. Food & Drug Administration.

At the time, Brooklyn was in his thirties and had recently finished his residency at University of Vermont Medical Center, then known as Fletcher Allen Health Care. He joined the team of UVM researchers conducting the study.

He was already something of an expert in the field. The Rhode Island native went to UVM for his undergraduate degree — "I like to ski, and Rhode Island is flat," he explained — but returned home to attend medical school at Brown University, which emphasized addiction medicine. Instead of becoming a family doctor, as he had planned, Brooklyn took a job at UVM's Substance Abuse Treatment Center.

Vermont's buprenorphine studies continued into the early 2000s. Around that time, one of the subjects became pregnant, which made her ineligible to continue. "So now I have a pregnant woman who is a heroin user who I can no longer treat with buprenorphine," Brooklyn remembered thinking. "What am I going to do?"

He wrote a letter to the U.S. Drug Enforcement Agency asking for a waiver to prescribe methadone to the woman. The DEA granted it, and Brooklyn soon began working with the state Department of Health to find other pregnant women addicted to heroin. "Before you knew it, I had 20 women at one time that I was writing prescriptions for," he said.

"He was one of the first physicians I knew who really put his neck out there and said, 'This is a viable medication,'" said Jackie Corbally, the City of Burlington's opioid policy coordinator.

That's in contrast to other doctors who inadvertently helped fuel the opiate epidemic. For years, many of them liberally prescribed opiates such as OxyContin for pain, sowing the seeds of addiction among their patients. Then, as the crisis worsened, some of those same physicians proved reluctant to take on opiate-addicted patients, citing the demands of handling such challenging cases.

When Vermont finally opened its first methadone clinic, Brooklyn was an obvious choice for medical director. In 2005, a second clinic opened in Newport; it, too, relied on him to be the prescribing physician.

Brooklyn clocked more miles as several other new clinics asked him to fill in until they found their own doctors. In some cases, that took a while — he made the four-hour round trip from Burlington to Newport once a week for 12 years.

"He was always willing to step up and fill in the gaps, or perhaps better described as gaping holes, in our treatment infrastructure," wrote former health commissioner Harry Chen in an email from Uganda, where he is serving in the Peace Corps.

Brooklyn's partner of six years, Cara Hart, recalled her first date with the doctor. As they walked along Lake Champlain, his phone rang "many, many times." He answered every call, she said, calmly dispensing advice to medical providers around the state about what to do with their patients.

Aside from his incessantly ringing cellphone, Brooklyn manages to maintain a healthy lifestyle, according to Hart. The father of three adult children meditates every morning for 20 minutes, commutes to work by bike year-round, does yoga in the evenings and makes sure he's in bed by 10 p.m. He finds time to ski, sail, read, garden and brew his own beer.

Colleagues said he never appears flustered or stressed, despite the fact that he makes countless potentially life-or-death decisions. He decides whether clinic patients are eligible for treatment, which medication and how much they need, and whether they take it at home or in the clinic.

"He carries an enormous responsibility," said Bob Bick, CEO of the Howard Center, which runs the Chittenden Clinic. That clinic alone treats 1,000 people. A staggering 1.3 percent of the Vermont population currently receives medically assisted treatment — more than any other state.

Brooklyn has a notably tolerant approach, continuing to assist patients even when they repeatedly relapse. He may reduce a person's dose, but he generally only terminates a prescription if continuing it would endanger the person's health.

The Burlington doctor compares ending a prescription for methadone or buprenorphine to "pushing people off a cliff without a parachute," and he often points out that a doctor would never deprive a diabetic of insulin just because they slipped up and went to Al's French Frys.

Many physicians aren't as magnanimous.

"There have been patients where I know, if it had been almost any doctor, that person would probably not have survived," said Dalton of Vermonters for Criminal Justice Reform.

After the FDA approved buprenorphine as a treatment for opiate addiction in 2002 — in part due to the UVM study — Brooklyn became one of the first Vermont doctors to prescribe it.

In 2011, he helped conceive Vermont's current treatment system. Though no one else interviewed for this story could recall who actually came up with the idea, Brooklyn had a clear memory of it. "I went to the state health department with Bob Bick," he recalled. "I sketched out this sort of rudimentary idea and called it the 'hub and spoke.'"

The concept is simple: Patients in need of intensive treatment go to the clinics, or "hubs," to receive methadone or buprenorphine and counseling services. More stable patients can receive their medication through primary care practices, which act as the "spokes." Roving teams consisting of a nurse and a social worker are available to help those doctors provide more support to patients. If a patient needs more care, his or her doctor can refer the person back to a hub.

Transitioning patients to their primary care doctors frees up space in clinics and integrates addiction treatment into the normal medical routine.

It took the state years to get the system fully up and running, during which time some addicts had to wait more than a year to get treatment. Today, Brooklyn noted with pride, those waiting lists have largely been eliminated. He estimates that he personally trained 150 of the nearly 300 Vermont doctors who are federally approved to prescribe buprenorphine.

He's still hands-on, too. For 20 years, Brooklyn has been a primary care doctor at the Community Health Centers of Burlington, where he spends two half-days a week seeing his patients, 35 of whom take buprenorphine.

"First and foremost he's a stellar family practice doctor," according to his boss at the Community Health Centers, CEO Alison Calderara. She credits Brooklyn with teaching her, and some of his fellow doctors at the health centers, that addiction "really is a chronic disease."

"I think when you're actually doing the work, it has a lot more credibility than if you're just some egghead that thinks something is a good idea," Brooklyn said. Plus, he added, "I like seeing people in recovery."

Even after decades on the job, Brooklyn is coming up with new ways to improve treatment.

Those urine samples he was sending to Germany? He excitedly explained that he's testing a new way to screen patients for drugs. Instead of peeing into a cup while a clinic employee watches, patients swallow a liquid with a unique molecular combination that will then show up in their urine. The process is quicker and less demeaning: Patients can pee in privacy but staff can still ensure they're not substituting someone else's urine.

During the tour of the Chittenden Clinic, Brooklyn began rapidly opening and closing large filing cabinets, searching for a device. Triumphantly, he pulled out a piece of plastic. The electronic wheel he displayed can be programmed to dispense buprenorphine pills, allowing patients to take their medication at home instead of having to travel to the clinic every day. Opening an app on his phone, Brooklyn explained that patients use the program to video themselves swallowing the pills and then send it to the clinic as proof. "Oh, my God, they love it!" he gushed. "This is liberating to be able to not come in."

Brooklyn doesn't have the same freedom. In fact, he's in even greater demand now that state officials around the country are seeking to replicate Vermont's hub-and-spoke model. California and Tennessee have hired him as a consultant; he recently hosted a group of doctors visiting from Wisconsin; and, in February, he'll give a presentation in Colorado. National reporters have started calling. "I'm really feeling overwhelmed," Brooklyn said. "It's almost like you've discovered some new cure for a disease, and everyone wants it."

To the relief of those working alongside him, he has no plans to slow down. Corbally, Burlington's opioid policy coordinator, said, "There's a sense of peace knowing that John is still out there prescribing."