At many North American nuptials, among the first things couples do after the ceremony is step onto a dance floor. Some choose to improvise: They might wrap arms around each other and sway to a beloved song. Others prepare in advance by taking classes and attending social dance events in ballroom, salsa or swing.

But once in a while, a couple is drawn to a dance with a reputation for drama, intimacy and passion.

They want tango. Argentine tango. The partners step into the world of molinetes and ochos months before their special day to secretly prepare a dance that will knock the socks off family and friends. Their comfort levels with performing a public dance can differ dramatically, but each of these couples has a vision, a chosen song, determination — and a deadline.

In the Burlington area, these tango-seekers often come to me: In addition to my work as an assistant arts editor and proofreader at Seven Days, I'm a dance instructor, choreographer and Argentine tango specialist. I'm so enamored with the art form that I wrote a 500-page doctoral dissertation on it. Just call me Dr. Tango; it's actually on my license plate.

I never intended to get into the wedding business, but in 2008, friends asked me to help with their dance, and I've been choreographing for engaged couples ever since. It's one of the most satisfying and joyful things I do — from identifying each person's strengths and incorporating them into the dance to helping them move as a graceful unit.

It's also a rather difficult task. Tango is normally improvised: It's a kinesthetic conversation to music, using a complex movement vocabulary. For most people, the tango learning curve is long, but engaged couples don't often have that kind of time. So the process of choreographing a tango wedding dance becomes equally as rich as the end product, inviting the three of us to create magic by combining their vision with my knowledge.

Couples' reasons for performing one of these choreographed wedding dances vary widely.

"I think the most important thing to us was to incorporate the song [in our wedding], and we felt like the best way to do that was with the dance," said Jessica Bridge of Malletts Bay in Colchester.

She and Chris Mason danced to "Fools Rush In" by Ricky Nelson on their wedding day in June 2016 at the Barns at Lang Farm in Essex Junction. The song, like every aspect of their wedding, had "a deeper meaning," said Bridge. Her brother, a musician and vocalist, played and sang it for them. "I feel like we would've done the song and our guests a disservice had we not prepared for it," she added.

And prepare they did. Bridge is the principal broker and cofounder of Element Real Estate, and Mason owns Champlain Industries, a commercial construction and redevelopment company. Although Bridge had taken a tango lesson previously, Mason had virtually no dance experience.

In about six private lessons during the month before their wedding, the busy fortysomething couple learned about the tango embrace and walk, stepping in time to the music, facets of leading and following, and some playful patterns.

"It was a really good thing for us to do," said Bridge. "We would go and hang out, take our shoes off and dance the tango, and that was really fun and way more relaxed than the rest of the planning."

For Megan Stearns and Ryan Morra of Hinesburg, rehearsing a choreographed dance was enjoyable in different ways.

"When everything else is swirling around you," said Morra, "it's fun and romantic to come together and say, 'This is our thing. This is for us.' It almost forces that time to just be in the moment with one another."

"We bonded over it," added Stearns.

The bride-to-be wanted their wedding dance to reflect their artistic passions. Stearns has studied ballet at a high level since childhood (her brother is a principal with the American Ballet Theatre), and Morra is a theater artist with the lead role in Lyric Theatre's April production of the musical Dirty Rotten Scoundrels. In their professional lives, Stearns is creative director of the Permanent Fund for Vermont's Children, and Morra facilitates professional development programs at Shelburne Farms.

Their decision to work with me was both emotional and practical.

"I'm used to performing choreography, and I'm actually now more comfortable having choreography," said Stearns. Morra felt that having a scripted routine would make him "less nervous than going out there and winging it with all eyes on you for three minutes," he said.

Stearns was also eager to learn a new dance form, and their song was a good match for a rumba or a tango. They danced to Rodrigo Amarante's "Tuyo," the theme song for the Netflix series "Narcos," which the couple had enjoyed when they began dating. The thirtysomething pair took five lessons in five weeks and practiced religiously at home before their wedding in September 2017 in the Coach Barn at Shelburne Farms.

One couple with whom I worked in 2012 had the time and the desire to take the long road in preparation for their wedding dance. In addition to taking private and group tango lessons with me, Sarah Heiss and Russ Elek of Burlington jumped headlong — or foot-long — into the local tango community, including dances organized by Queen City Tango. 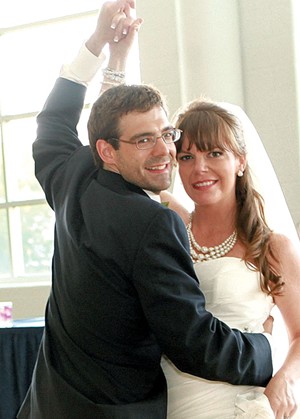 "In order to get our choreography down and learned, we had to have learned some basic tango movements," said Elek. "So we were dancing three and four nights a week for two and a half months." The twentysomething pair practiced not only with each other but also with local dancers at practicás (practice sessions) and milongas (social tango events).

Their song, "Hard to Concentrate" by the Red Hot Chili Peppers, was a far cry from typical tango music — and a wonderful challenge.

"We wanted to do something outside the box," said Elek, communications specialist for the Burlington School District.

"I liked the lyrics of the song and that it had an edge. It's not a typical love song or wedding song," said Heiss, assistant professor of public communication at the University of Vermont. The pair married in August 2012 at Hiram College in Ohio, where they met as undergraduates.

So, how did these three wedding dances turn out?

Immediately after their marriage ceremony, Heiss and Elek silently entered the reception, which was already getting lively and loud. As they took their positions on the dance floor, the DJ music faded, their song began and they began to dance.

"All of a sudden, people were like, 'Whoa, they're dancing,'" said Elek, who recalled stunned friends oohing and aahing at dramatic moments. "I remember a giant smile on my wife's face," he added. "And then she grabbed me and kissed me at the end, because we nailed it."

Like Heiss and Elek, Stearns and Morra danced right after their wedding ceremony, following a quick costume change. "I think my favorite part was the element of surprise for the audience," said Stearns. "As soon as people realized that we were doing a choreographed piece, you could just feel the excitement level in the room rising. People were catcalling and very into it."

She and Morra said they enjoyed the experience so much they wished they could repeat it.

Bridge's recollection of her dance was somewhat different: "It didn't really feel like anybody else was in the room," she said. That was partly because she and Mason were keenly focused on the dance and the steps but also because "it was the first time that we were a married couple. It was a pretty intimate moment for the two of us."

Bridge did recall that those watching "were probably impressed, because I'm quite sure not one person in that room had ever seen my husband dance, except for maybe his college buddies." And then there was the dip, their final pose. "That was incredibly dramatic. We did get a lot of response to the dip!" Bridge said, laughing.

In working with couples, I'm always struck by how much they learn — about tango, themselves and their relationship.

"I had to continually remind myself to be gentle with us and the learning process," said Stearns, "and that it would be just fine if we were not tango stars by the time the wedding came around."

For Morra, collaborating on their wedding dance had implications for their future. "I learned more about how we work, the pace at which we work, the kind of communication we need to have with one another to make something great like that happen," he said.

And then there's what I learn. As I watch each couple practice their finished dance, I invariably choke up, tearfully appreciating the power of music, dance, partnership and love.

The original print version of this article was headlined "Dancing Desires"