'Dr. Blacksmith' Lights a Fire at the Maritime Museum

The rhythmic clang of a hammer striking metal echoed through a tool-packed workshop on a recent morning at the Lake Champlain Maritime Museum in Vergennes. With each hammer blow to the anvil, a glowing orange rod of hot iron bent, twisted and fanned out, slowly transforming from inanimate object to something organic looking, perhaps a plant or flower petal.

Warren Rinehart, the metalworker deftly wielding the hammer, didn't fit the usual stereotype of a young and muscle-bound blacksmith clad in a heavy smock. Wiry, balding and bespectacled, the 75-year-old Middlebury man stood slightly stooped over the anvil, occasionally firing up an acetylene torch, wearing no protective gear other than a single heat-shielding glove for gripping the iron rod. Dressed in a blue button-down shirt and beige trousers, Rinehart looked more like an accountant.

A quick scan of the Rinehart Blacksmith Arts Center revealed its namesake's past profession. Amid an antique-shop-like clutter of deer skulls, African masks, wrought-iron knickknacks and metallurgical supplies, a Vermont license plate on the wall reads "BONEMAN." In the cramped, tchotchke-filled office nearby, a human skeleton dangles in one corner. A hand-lettered sign above the door identifies it as the realm of "Dr. Blacksmith."

For nearly four decades, Rinehart worked as an orthopedic surgeon — for 28 years in Utica, N.Y., followed by another 10 at the University of Vermont Medical Center in Burlington. Prior to his retirement from medicine four years ago, Rinehart decided that he wanted his lifelong avocation — blacksmithing — to live on after he was gone. So he forged a relationship with the maritime museum to make it a reality.

In 2006, Rinehart approached LCMM's leadership team and offered to donate all of his blacksmithing equipment to the museum upon his death. Though the nonprofit's staff appreciated Rinehart's generous offer, they informed him that the museum lacked the space necessary to display or even warehouse all that equipment. So, in the words of LCMM codirector Erick Tichonuk, Rinehart "rectified the situation" by building an 1,800-square-foot, state-of-the-art blacksmithing facility on the museum's grounds. 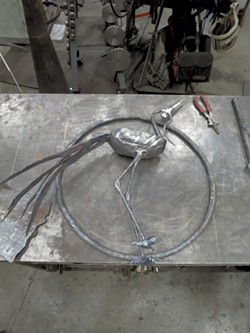 Today, half of the building serves as Rinehart's personal workshop. He typically spends 10 to 12 hours there weekly working on whatever project strikes his fancy: metallic sunflowers, cranes, salamanders, loons. Rinehart rarely sells his pieces or gets formal commissions, though a few of his sculptures — including a redheaded woodpecker and a 6-foot-tall crane — are displayed outside the Residence at Otter Creek in Middlebury, where he and his wife, Vickie, lived until recently.

The other half of the arts center houses five fully equipped blacksmithing forges, which are used regularly by students and experienced metalworkers alike. For much of the year, the museum offers courses and workshops in blacksmithing at nearly every level, from beginner to expert.

Bob Bordeaux, a Huntington bladesmith who makes custom knives, noted that very few schools offer courses in blacksmithing. Aspiring metalworkers often must find an experienced smith who's willing to take on an apprentice, or travel long distances to attend a specialized school.

"I had no idea there were people out there doing this type of thing when I took it up," said Bordeaux, who taught himself blacksmithing through trial and error. By building this facility, he added, "Warren has done a wonderful thing to help keep the craft alive."

Rinehart's interest in blacksmithing reflects his agrarian roots. He grew up in Greensburg, Kan., a farming community of fewer than 1,000 people. His grandparents and uncles were all farmers, so Rinehart spent much of his childhood on the land.

After attending medical school at the University of Kansas, Rinehart completed his residency at New York's Albany Medical Center, then took a surgical position in Utica. It was there he learned blacksmithing, more out of necessity than as a hobby.

In the early 1970s, Rinehart decided to work the farm he'd bought in Utica using a team of Belgian draft horses. But he had trouble finding farriers who knew how to shoe the animals. One young farrier made an attempt to shoe two horses, Rinehart recalled, that took him eight hours.

The next day, one of those horses threw a shoe, and the farrier couldn't immediately return to replace it. Rinehart decided to take matters into his own hands. That meant heating and custom-fitting a horseshoe to each hoof, a task that required a forge and blacksmithing skills.

What began as a farm chore soon grew into a lifelong passion. Over the years, Rinehart took blacksmithing classes, first in the U.S. at schools such as the Ozark School of Blacksmithing in Missouri, then overseas. In the late 1980s, he spent a month in Prague studying metalworking. In 2002, Rinehart traveled to Israel with seven other Americans to study under internationally acclaimed blacksmith Uri Hofi.

After almost three decades of practicing medicine in New York, Rinehart and his wife relocated to Charlotte, Vt., where he "tried" to retire.

"That lasted about six months," Rinehart said. "One day I called up the head of orthopedics at [then-called] Fletcher Allen [hospital] and asked him if he wanted a part-time spine guy. He said, 'I've been looking for you for two years.'"

Rinehart spent another decade as a surgeon in Burlington before retiring for good.

Though blacksmithing might seem like a hazardous hobby for someone who relies on his hands in his profession, Rinehart appeared unfazed by the risks.

"I draw blood every couple of weeks or so, but I heal up," he said with a chuckle, "so it's not a major deal."

After the Rineharts sold their house in Charlotte and moved into the Residence at Otter Creek, the blacksmith needed a place to set up shop. That's when he approached the LCMM and eventually offered to build them one.

Why would a museum devoted to maritime history be interested in blacksmithing? As Eloise Beil, LCMM's director of collections and community relations, pointed out, blacksmithing and bladesmithing have always had a close relationship to seafaring communities. "You would have been very hard-pressed to do shipbuilding or manage and operate ships if you didn't have blacksmithing facilities close by," she said.

Indeed, blacksmithing was an aspect of the museum before Rinehart arrived. In May 1989, LCMM built a forge to aid construction of the Philadelphia II, a replica of the 18th-century continental gunboat that patrolled Lake Champlain until it was sunk by the British in 1776.

When the museum began planning that replica, Beil explained, the staff decided to forge all of the vessel's iron hardware, including more than 9,000 nails, on the premises using an 18th-century-style forge. Ever since, she said, blacksmithing has been "enormously popular" with museum visitors.

But, as Beil noted, Rinehart's contribution took the museum's metalworking capabilities to a new level. First, because the shop is indoors — the old forge was not — LCMM can now offer classes throughout the year, including during winter months when the rest of the museum is closed.

In addition, Rinehart founded the LCMM Blacksmithing Guild, which each spring hosts the Hammer-In, a gathering of regional blacksmiths. The daylong event includes one featured demonstrator who focuses on a particular technique or skill set. It gives blacksmiths, who typically work in isolation, the opportunity to socialize and share ideas.

"[Rinehart] started that right away when the blacksmithing center opened," Beil said of the guild. "That was clearly one of his dreams."

Though Rinehart has done much to promote metalworking in Vermont — including teaching students from Middlebury College and Northlands Job Corps Center — the modest Midwesterner isn't particularly garrulous about his accomplishments. When asked, for example, whether he was artistic as a child, Rinehart replied simply, "No. I'm still not artistic."

Others would beg to differ. Mike Imrie, a professional blacksmith at Two Worlds Forge in North Ferrisburgh, who occasionally teaches classes at the Rinehart Blacksmith Arts Center, said that when he has a technical problem on a piece, Rinehart is always willing to stop what he's doing and brainstorm a creative solution.

"For me, he's been a mentor," Imrie said. "He recognizes that blacksmithing is not a mainstream activity, and he really wants to pass on his knowledge."

As this reporter finished the interview, Rinehart held up the piece of metal he'd been reshaping for 10 minutes and asked, "You see a leaf starting to form?"

He walked to a belt sander and buffed the piece's edges smooth, showering his legs and the floor in flying sparks. Then he reheated the metal with an acetylene torch, scrubbed it with a wire brush to give it more texture and sprayed it with a clear lacquer. With an avuncular wink, Rinehart handed the finished product, a key fob, to my 7-year-old daughter.

"That was so cool!" she exclaimed as we walked away from Rinehart's shop. "I want to learn to do that."