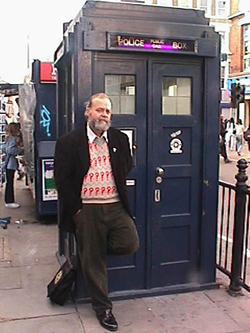 Dr. Alfred “Tuna” Charles Snider, of Burlington, teacher, scholar and mentor of the University of Vermont debate team for over 30 years, died December 11. He is survived by his wife, Bojana Skrt; daughter Sarah Jane; son-in-law Justin Matthew Green; and grandsons Jackson Matthew and Levi Martin Green. He also left a sister, Janet Hermanaeu; his nephew, Will Wilson, and wife Amy Wilson and their children Annie, William, Rachael, Jacob; his niece Sarah Wilson and her children Katie, Allie, Anna, Maddie and Johnny; his niece Linda and her child Dakota; and his former wife, Sally Zitzmann.

Dr. Snider loved an audience. Tuna would get onstage with a booming voice, furrow his eyebrows and declare fiercely, “Good morning, I am Alfred Charles Snider the third, the Edwin W. Lawrence Professor of Forensics.” Then, pausing, he would smile, and say, “But you can call me Tuna.”

Born in California, Snider went to Brown University, where he was a top-ranked national debater. He earned a master’s degree in rhetoric and public address from Emerson College and his doctorate in communication studies, personal and social influence, from the University of Kansas. Since 1982, he has served as the director of the Lawrence Debate Union. Dr. Snider spent over 40 years promoting debate and critical communication as an alternative to violence and conflict. He believed in the viability of democracy and genuine civil society. “The kind of skills you develop through debate are twenty-first-century success skills,” Snider said in a Vermont Quarterly story in 2012. “Wherever you go, whatever you do, you’re going to have to take information and shape it into messages that influence people.”

Dr. Snider led the University’s Lawrence Debate Union for more than three decades, taking the student team to international acclaim. UVM currently ranks 15th in the world among academic teams in the International Debate Education Association alongside distinguished debaters from Yale, Cornell, Oxford, Cambridge, and the London School of Economics.

Dr. Snider also had a huge impact on the Burlington community. Between 1984 and 2002, Tuna cofounded the Vermont Reggae Festival and graced the stage for years as the master of ceremonies. For over 15 years he hosted the “Reggae Lunch” radio show on WRUV 90.1 FM. They will honor him on Wednesday, December 16, 8-10 p.m., with a tribute show. Dr. Snider won the 2008 Director of the Year (VCAM) for his television program "Flashpoint" — with nearly 500 episodes, with panels discussing relevant political and social issues. Dr. Snider was also an enormous "Doctor Who" fan and hosted "Doctor Who" Theater every Monday night for the last 16 years.

Tuna cultivated a strong community of leaders committed to social justice, and there is no doubt they will continue his legacy. Travel spirits be kind!

A memorial service will be held Friday, April 29, at 4 p.m. at the Ira Allen Chapel. There will be a reception immediately following.

In his honor, donations can be made to the Lawrence Debate Union alumni.uvm.edu/foundation/giving/online/