Side Dishes: A steak house will replace Sakura Bana on Church Street 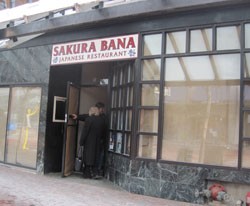 As longtime owner of Halvorson’s Upstreet Café, Tim Halvorson knows a thing or two about what Church Street diners want. As soon as this summer, he’ll open a steak house just two doors up from his existing restaurant, in the space left vacant by Sakura Bana Japanese Restaurant when it closed last month.

Not just any steak house, either. “My hope is to do a high-end USDA Prime steak house,” says Halvorson. “I think there’s a market for it. Even in big cities, USDA is a cut above.”

Halvorson is still in the early stages of cleaning and remodeling the dining room and kitchen of his new restaurant. He hopes to knock down a wall and connect the steak house’s kitchen with the one at Halvorson’s, allowing staff to go back and forth. He’s already interviewing chefs to command the team that will be broiling top-quality steaks and making seafood appetizers.

“Since Delmonico’s in New York, there probably hasn’t been an original idea [for a steak house]. It’s just about picking and choosing for this marketplace,” Halvorson says. His choices will include plenty of the genre’s classics, including wedge and chopped salads and sides of creamed spinach for the wet-aged hunks of beef.

Halvorson also foresees a booming “grown-up” bar scene for the restaurant, which will initially open only for dinner. “I hope it’s a busy place where people feel like they can come in and share,” he says. “We really want the full steak house experience.” A meaty proposition.