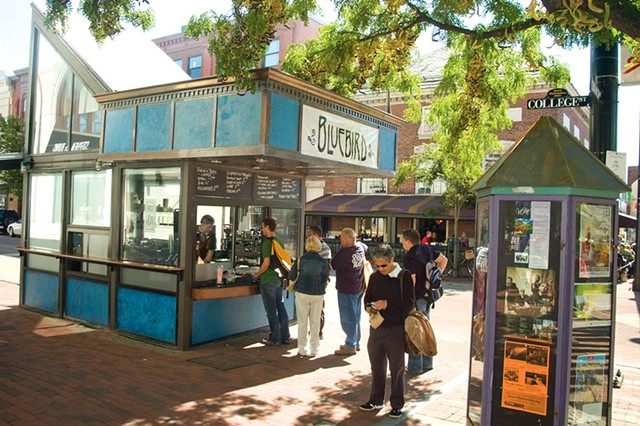 The Bluebird Coffee Stop at the corner of College and Church streets will not renew its contract with the Church Street Marketplace. "We have decided not to renew as we continue to focus our energy at Bluebird Barbecue on Riverside Avenue in Burlington," said owner Sue Bette in an email to Seven Days.

This represents the third closure for the Bluebird group in the past nine months. Bette shuttered her flagship Bluebird Tavern in downtown Burlington in May 2015 and closed an additional coffee stop at the Innovation Center of Vermont in Burlington's South End in August.

The 126-square-foot kiosk was built in 1981 and currently rents for $14,000 per year. While the Church Street Marketplace District Commission searches for a new tenant, Bluebird will stay open; Bette does not expect to vacate the space until this spring.

Proposals for new businesses will be accepted until March 7, 2016. The Marketplace is looking for a business that will provide "RETAIL, FOOD or SERVICES that support and enhance the character and reputation of the Church Street Marketplace District," according to a memo outlining the guidelines for proposals. The document also stipulates that the new occupant must sign a three-year license agreement with the City of Burlington.

Fans of the Bluebird Coffee Stop may not have to say goodbye to the coffee they love, though. According to Bette, Jason Gonzalez, current manager of the coffee stop, will be putting in his own bid for the space. "The whole team at Bluebird is rooting for Jason to continue to share his amazing coffee talents on Church Street!" she wrote. Gonzalez confirmed that with Seven Days via phone on Monday morning.

The original print version of this article was headlined "Bye-Bye, Bluebird Coffee"