Down to the Wire: Accusations Fly in Burlington Telecom Negotiations 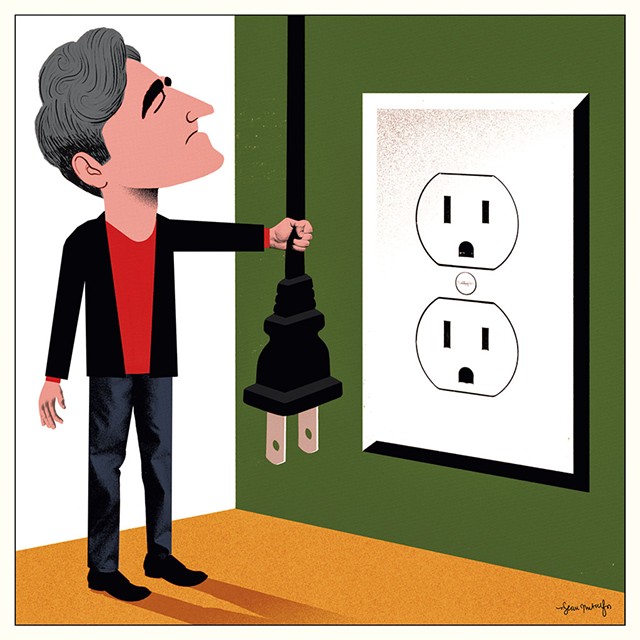 Mayor Miro Weinberger touted September 20 as a celebratory day in Burlington. The city was to publicly reveal the finalists of the bidders for Burlington Telecom, and Weinberger stood poised to wrap up an eight-year saga involving the cable and internet provider.

The mayor characterized the revelation as a fulfillment of his campaign promises from five years earlier. "As long as the city gets the final steps in the process right ... we will close the book on the challenges that I promised to resolve in 2012," Weinberger said during a press conference at city hall.

Indeed, it did seem like the sales process would be concluded easily enough. City officials unveiled three offers for the telecom: a $30.8 million bid from Schurz Communications, a family-owned Indiana company; a $27.5 million offer from the publicly traded Ting; and a $12 million bid from the co-op Keep BT Local.

But afterward, Councilor Kurt Wright (R-Ward 4), appearing flustered, approached reporters. Only three bids had been unveiled ­— not four, as promised — and some councilors blamed the mayor.

Wright alleged that Weinberger had asked the fourth bidder to withdraw without input from the council. "There was a breach of trust," Wright asserted.

Councilor Max Tracy's (P-Ward 2) criticism was even more scathing. He compared Weinberger to former mayor Bob Kiss, who secretly propped up the telecom with $17 million in city funds.

Like Kiss, Weinberger was "making decisions in secret without council or public consultation as well as ... not taking personal responsibility for mistakes that were made with regard to BT," Tracy wrote in a message to Seven Days that day. "He is, simply put, a hypocrite."

During an emergency press conference in his office, Weinberger called Tracy's accusations "breathtaking" and "wrong." Weinberger maintained that the bidder had "made an independent decision." It was based partly, the mayor said, on his own concerns — which he declined to reveal.

The Democratic mayor stood flanked by Chip Mason (D-Ward 5) and Richard Deane (D-East District), who said they'd stay focused on the remaining bids. The city is soliciting public input; the council plans to narrow the field to two finalists on October 2 before selecting a winner on October 16.

The "hiccup" threw city officials into a five-day flurry of accusations and discussions. After a three-hour executive session Monday night, the council and the mayor decided to "explore whether the possible conflict of interest with the fourth bid could be resolved," Weinberger and City Council President Jane Knodell (P-Central District) said in a press release Tuesday.

But the debate over the fourth bidder created a schism. On one side stood the city councilors who accused Weinberger of asking the bidder to drop out — interfering with the process. Tracy alleged that the mayor acted unilaterally to advance a bid he favors. Yet the mayor and several Democratic councilors initially maintained that Weinberger did nothing wrong.

At the center of the debate is the fourth bidder. City officials would not name the bidder or release more information, citing a nondisclosure agreement signed by all parties. But Seven Days has learned that he is Faisal Nisar, a 42-year-old investor who operates his own private equity business, ZRF Partners.

Reached by phone last week at his New Jersey home, Nisar confirmed his involvement. He declined to speak further, citing concerns about the nondisclosure agreement he had signed with the city. Nisar's name has not previously been made public.

BT has bedeviled the city since before Weinberger took office.

The city allocations to the then-ailing telecom became public in 2009, setting off a political firestorm. Then, in 2011, Citibank sued the city for $33.5 million to cover the cost of equipment it had leased to the telecom. The city's credit rating plummeted to nearly junk bond status. Weinberger, who sought to restore financial stability, settled the lawsuit during his first term as mayor for $10.5 million.

"I've spent more time on this than probably any other issue," said Weinberger. He cited near-weekly phone conversations with BT consultants and management for the last five years.

"It's hard not to consider that maybe he's trying to limit what people know about the way that this is playing out." City councilor Sara Moore tweet this

By early this year, the Burlington Telecom Advisory Board began laying out the sales process. The board recommended that all parties sign a nondisclosure agreement that forbids both the city and bidders from disclosing "confidential or propriety information" during the process — and for three years afterward.

According to Middlebury-based ethics lawyer Mike Palmer, such an agreement is standard for a competitive municipal bidding process involving trade secrets.

Then BTAB, with input from city residents, decided on criteria for choosing a buyer: local control, a retained city stake in the entity, low prices, support for net neutrality, and a build-out to the rest of Burlington and, possibly, to surrounding communities.

BTAB decided to solicit bids from companies that seemed like a good fit or that were familiar with Burlington.

Leading the process was Terry Dorman, a consultant with Dorman & Fawcett, who was hired by the city in 2009 to resuscitate the failing BT. The Quechee-based consulting firm helped the city and Citibank reach a settlement.

The terms require the city to sell the telecom by January 1, 2018, in order to maximize its share of the profits. Dorman & Fawcett will receive 10 percent of the sales price.

At the heart of the questions about a potential conflict, according to councilors, is Dorman & Fawcett's involvement. But councilors were not specific.

Dorman denied to Seven Days that any conflict exists. "There isn't one based on everything I know. We stand behind the work we've done," he said. The firm is dedicated to getting the city the best possible result, he said.

Dorman has been entertaining offers for BT since he took the job, he said, and, when the city was ready to sell this year, he reached out to those who had previously expressed interest or seemed like a good fit.

The city received eight bids by its June 5 deadline. BTAB narrowed the field to four in July but never revealed the bidders' identities or bid amounts.

Throughout the summer, residents protested the secrecy, speaking at council meetings about the need for citizen input. Only the co-op, Keep BT Local, revealed that it had submitted a bid.

According to some city councilors, Nisar's proposal had appeal.

Nisar earned an MBA from Columbia Business School and then spent three years working at Merrill Lynch in New York City. Starting in 1999, he spent 17 years "managing investments in technology and media companies" at Baker Capital, a private equity firm in New York City, according to his LinkedIn profile.

Nisar launched ZRF, the entity he used to submit a proposal for BT, in April 2016. Nisar's bid wasn't the highest, but it attracted "significant interest" from some councilors, according to Wright.

"They had an aggressive plan in regard to economic development and small business development in the community," Wright said, noting that the company had also planned to expand beyond city limits. "Many of us were very interested in them as our No. 1 or No. 2 choice."

According to Councilor Ali Dieng (D/P-Ward 7), Nisar was attractive for his creative and community-oriented approach. Nisar had promised to invest heavily in BTV Ignite and proposed partnering with the Burlington High School's technical center, Dieng recalled.

On September 11, with four bidders left, Weinberger emailed the council. He had concerns about ZRF, he said.

Nisar and Dorman have ties. The two once served together on the board of a Massachusetts-based technology firm, Custom One Design. Dorman said he's known Nisar for 12-plus years in a professional capacity.

The two also shared a friendship with Gary Evans, who consulted with BT from 2009 to 2013 and was key to its survival, according to Councilor Joan Shannon (D-South District).

"Faisal is one of the most principled, honorable people I know," said Evans, who lives in Minnesota.

The connections between Nisar and Dorman were obvious from the start, said Deane. But it took outside legal counsel, Primmer Piper Eggleston & Cramer, which the city hired last spring, to recognize the potential importance of the issue. "We should have done a better job as a city council in recognizing those issues early on," Deane said.

Weinberger said he received a memo from the Primmer Piper attorneys on September 1, and then he reached out to Knodell and Wright before notifying the full council on September 11. Weinberger told the council he would express the "legal and regulatory concerns" to the bidder. The council was to discuss it during a meeting September 18, said Tracy.

In the end, they never got the chance.

Dorman requested that Nisar withdraw his bid "in the wake of the legal, regulatory and conflict-of-interest concerns that have arisen," Weinberger wrote in an email on September 18, three hours before the meeting. "I support Terry's decision and expect there will be further conversation about it in our session this evening," he wrote.

The council was "furious," Tracy said. He accused the mayor of trying "to stage-manage everything until they had their favorites."

"We were stunned," Wright said. "That was the stunning part, that the action had already been taken."

Weinberger's critics said the move had subverted the public process and undermined the council's credibility. Just days before, Knodell and Wright had announced plans to release information about four remaining bidders.

"It's hard not to consider that maybe he's trying to limit what people know about the way that this is playing out," said Councilor Sara Moore (P-Ward 3).

By last Thursday, "the phones were hot" with councilors calling each other to figure out what exactly had gone on, said Adam Roof (I-Ward 8). Weinberger took calls from Washington, D.C., where he was celebrating Rosh Hashanah with family.

In the end, the councilors settled along party lines.

Democrats stood by the mayor. The loss of the fourth bidder was "somewhat unfortunate," Shannon said. "I don't think they're nefarious actions." Instead, the controversy has made Nisar's bid "this kind of forbidden fruit, which makes it much more appealing than it would have been," Shannon said.

Dieng, meanwhile, cast blame for keeping the sales process under wraps and not listening to public feedback — most of which has been in favor of the co-op, he said.

"I'm blaming the mayor, the attorney's office, the president of the city council," he said. "The whole process about this deal was not well done."

By Monday, Weinberger acknowledged that he had made a "communication misstep." He told Seven Days that he did not expect such a strong council reaction.

The statement he and Knodell released Tuesday seemed to indicate that some officials have reached a truce. If the possible conflict of interest can be resolved, the statement read, "the fourth bidder will be encouraged to promptly submit a final" letter of intent. "Together we will be pursuing this outcome immediately," it concluded.