Down by the Old Waste Stream 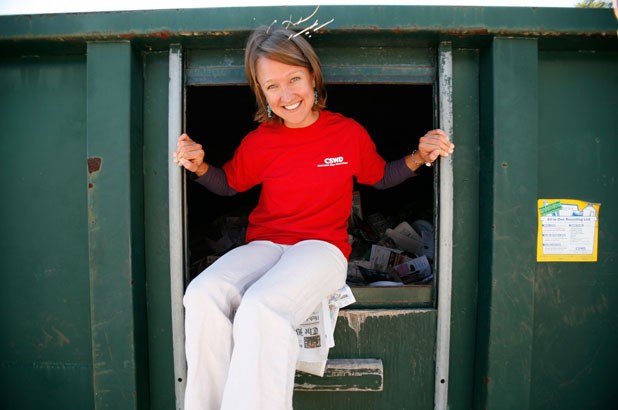 Jessica Sankey has a dirty job. And yes, she’s heard that before. As a waste reduction coordinator for the Chittenden Solid Waste District, Sankey is used to people making jokes and screwing up their faces when she describes her days sorting through strangers’ garbage. In addition to showing people just what’s in their trash, Sankey is responsible for educating both adults and schoolchildren about the environmental, social and financial impacts of the choices they make.

After earning a degree in environmental science from the University of Vermont, Sankey, who lives in Burlington, headed to Cape Cod to grow feed for a beef herd at a “gentleman’s teaching farm” modeled after Shelburne Farms. But she missed Vermont and moved back two years later to work on Maple Wind Farm in Huntington. Though she loved farming, Sankey came to realize her true passion was teaching. When the opportunity arose to work at CSWD doing education, she couldn’t pass it up.

But don’t think the 29-year-old is insufferably dogmatic about recycling and compost. The “Dumpster diva” does her best to reduce her own impact on the waste stream, but admits she’s far from perfect. That Tropicana orange juice container in her fridge? Not recyclable. Nor is that pint of Ben & Jerry’s ice cream in her freezer. And every so often, Sankey throws away something that could be recycled or composted.

She’s fallible, just like the rest of us. That’s what makes her message about waste reduction powerful. Seven Days sat down with Sankey to gab about how we can all be less trashy.

Seven Days: So, what exactly is a “waste reduction coordinator”?

Jessica Sankey: My job is to capture resources from the waste stream and to increase diversion rates in Chittenden County. That means educating people to reduce disposable items like coffee cups, utensils, plastic bags, Styrofoam. People get really caught up with Styrofoam packaging.

SD: Yeah, what do you do with that?

JS: I have a colleague who puts it in a box and sends it back to the manufacturer.

SD: I would just put it in someone else’s garbage and make it look like it wasn’t mine. Would you recommend that?

JS: No, definitely not. It is something that’s forced upon us as consumers because of the distribution of materials and unsustainable manufacturing practices. But there is a movement called “product stewardship,” and basically it’s the manufacturer taking responsibility for the life of its product.

So, for something like a computer, it means there’s a code on the computer, and when it breaks or needs refurbishing you simply send it back to the manufacturer and it’s up to them to fix it. It’s working up the waste stream to make it easier for people to make the right choice.

JS: Yeah, it does. And people are removed from it on purpose because it’s gross. But when you start really evaluating why it’s gross and how to make it less gross, it’s really easy. And most of that is dealing with food scraps.

SD: It seems like you’re really all about education in the position.

JS: It’s cool because you can fit waste reduction into a bunch of different models and teaching strategies. Right now it has a lot to do with place-based education — turning kids loose in the community and using the bigger community as a classroom. For me, it’s educating teachers on how they can use something like waste reduction as part of a unit studying community, place, sustainable living.

SD: I remember when I was in school and they were, like, This is what recycling is — take your aluminum tin can and put in the recycling bin. And that was the extent of any sort of waste-reduction education. It seems like it’s moved so far beyond that, especially here in Vermont.

JS: It has, for sure. Now, if you were to take that same concept, you can go into an exploration of natural resources — where did that tin can come from, where are the iron ore and bauxite mines located and how much energy goes into taking that stuff out of the ground. You’re really looking at the whole life-cycle process.

SD: OK, so I just had a bag of potato chips and I feel really guilty because I had to throw the bag in the garbage. Does your job mean that you don’t eat potato chips?

JS: I think our society forces us to be hypocrites to a certain degree. Yeah, I eat potato chips, too. I don’t have the space to grow my own potatoes or cook my own potatoes or fry my own potato chips. So I create that waste, as well. But I could choose to buy a huge bag of potato chips rather than individual servings. These small decisions are incorporated into this lifestyle and become habits more than anything else. If you practice something long enough, it’s no longer an inconvenience.

SD: Do you get annoyed with the trendification of environmentalism? The reusable shopping bags, the water bottles, etc?

SD: How well do the kids you deal with embrace the ideas of waste reduction?

JS: Depends on what grade it is. The biggest challenge is probably apathy in the middle school. I remember I did a presentation at a middle school and at the end was met with blank stares. High schoolers have the biggest impact when it comes to influencing middle school kids. But the younger they are, the more influence they have on their families.

SD: What is the garbage situation like at your house?

JS: Ahh (laughs). So, my boyfriend and I have decided to go to Pine Street Drop-Off Center from now on because you can weigh your garbage there, and if you’re good at composting and recycling, your garbage doesn’t weigh as much and you pay by the pound.

SD: What kind of weight are we talking about?

JS: Between my boyfriend, the two cats, the dog and me, we only produce 35 gallons of true trash per month. But a lot of that has to do with cat litter. What are you going to do? If you live a sustainable lifestyle, it probably doesn’t include owning cats.

SD: I have a dog, and I throw her poop in other people’s garbage cans.

SD: How’s your boyfriend at composting and recycling?

JS: He’s better than I am now. And he’ll question me sometimes. He calls me out on things because he’s usually the one standing over the scale at Pine Street. It’s like a challenge for him: How light can we get our trash?

SD: So he probably wants to get rid of the cats?

JS: Yes, he totally wants to get rid of both cats.