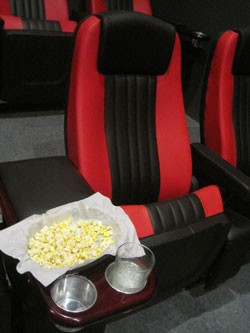 Popcorn with heart-clogging fake butter has its place, but in the last two weeks, two local movie theaters have gone above and beyond with their dining options. Essex Cinemas led the charge with the May 29 debut of Club Take 2. On June 3, Oscars Bistro & Bar opened at the Majestic 10 in Williston.

Club Take 2’s executive chef is Brent Leary of Rustico’s, also located in the Essex Shoppes & Cinema. He’s pulling double duty at both restaurants. “I bounce back and forth every hour each night,” he says. “Thank God we’re so close.”

Classically trained Leary supplies flatbreads from Rustico’s to the theater, but there isn’t much overlap between its Italian menu and the farm-fresh American offerings at Club Take 2. Nonetheless, Leary’s signature attention to detail is definitely on show at the latter. Poutine is made from scratch, with a demi-glace of veal bones replacing traditional gravy. A butcher board is filled with house-cured local meats, including guanciale, prosciutto di Parma, and traditional accouterments such as caper berries and homemade mustard.

Adjacent to the cheerful main dining room, the restaurant has a viewing room of its own with a 25-foot screen. Most nights, games turn the place into an upscale sports bar. Leary says the theater will also play awards shows and other special events. For many of these, he says, expect special themed menus.

Guests can bring drinks in from the bar (just beer and wine for now) and even dig into a burger or dessert, such as limoncello torte or chocolate brownie mousse parfait, while seated in one of the comfy seats, complete with extra-large cupholder armrests. Food from Take 2 is not allowed in the main theaters, but Rustico’s pies are available at the concession stand to tide folks over.

Over at Williston’s Oscars, chef Todd Houston, formerly of the Farmhouse Tap & Grill, is also using local ingredients as inspiration. As at Club Take 2, a plate of Vermont cheeses is on the menu. However, much of the cuisine takes its cues from abroad.

Appetizers include chicken satay and homemade lemon hummus with veggies. Both can be ordered as part of a bento box that fits four choices, which also include pulled-pork sliders and hand-cut fries. Roasted chicken from Misty Knoll Farms with lemon risotto and grilled flank steak with kale gratin and fries are among the entrées.

For now, only desserts can be brought into the theaters — think milkshakes from Island Homemade Ice Cream and brownie sundaes.

However, entertainment is available right at the restaurant, which will be open at least until midnight on weekends. On June 16, Vermont Comedy Club will host its first show at Oscars. After that, comedians will perform on the first and third Thursday of every month. Dinner and a show? That’s entertainment.