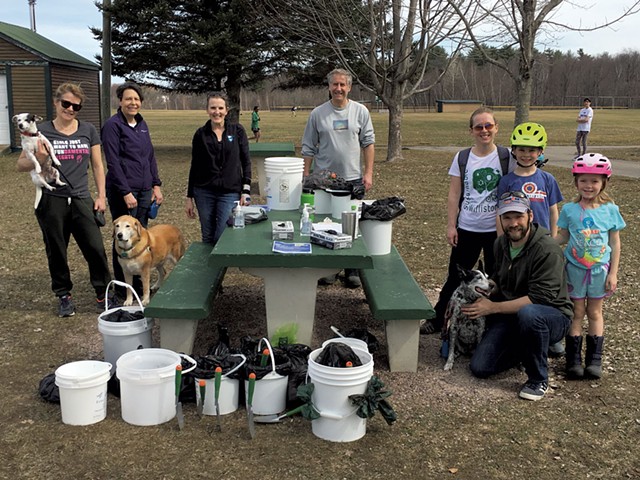 Scoop some poop, then score a free lunch and a beer.

The Lake Champlain Committee, an organization dedicated to keeping waterways clean, has teamed up with Magic Hat Brewing for an April Stools' Day event on Wednesday, April 24. Volunteers will meet at Red Rocks Park in South Burlington to pick up a winter's worth of "hound mounds."

Then the group will head to Burlington and hit four parks before lunch and an awards ceremony at the Magic Hat Artifactory. The South Burlington brewery uses lake water for its beer, "so it's really important that we protect our waterways," said events manager Katie DeWitt.

Dog poop carries nutrients that feed the growth of weeds and algae and can even nourish cyanobacteria, according to Lori Fisher, LCC's executive director.

"[The Environmental Protection Agency] estimates that two or three days' worth of droppings from just 100 dogs contributes enough bacteria to temporarily close a water body to fishing and swimming," she said.

That's bad news in a state where the health of Lake Champlain is already a hot-button issue. Fisher's group has held cleanups for about 10 years. So far this month, scoopers have hit parks in Winooski and St. Albans, while a dozen volunteers at the Williston Community Park last week picked up 800 dog droppings across just one mile of trails, Fisher said.

"It's a great way to just get outdoors, get a little exercise and do some good at the same time," she said.

Fisher expects an even bigger haul from the April 24 event. About 50 Magic Hat employees will participate, according to DeWitt. And any community member is eligible — and encouraged — to sign up. DeWitt said she'll hide a "golden stool" in one of the parks. Whoever finds it will win a prize, as will those who bring in the top three biggest bounties.

But will the volunteers be ready to eat lunch after hours of scooping doo-doo?

"There'll be plenty of time to wash up and be in a less-redolent area," Fisher said with a laugh. "Hopefully people won't lose their appetite over it."