Side Dishes: Radio Deli to expand into DoughBoy's space 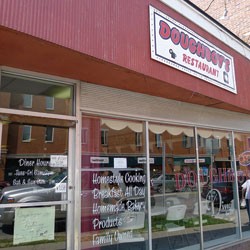 All good things come to an end. So it is with DoughBoy’s Bakery & Coffee Shop, which has resided on Pearl Street since 1978 and will close its doors on July 18.

The handwritten sign in the window that has greeted patrons since last week — “Doughboy’s Is Retiring,” took some by surprise, and news of the closure inspired regulars to call Doughboy’s a “magic diner” full of “good eats and warm hearts” on the Seven Days staff blog, Blurt.

Owner Rod Boutin says his landlord, Hinsdale Properties, would not renew his lease, and he’s not interested in moving. “I’m ready to call it quits,” says Boutin, 76. “I’ve worked seven nights a week since 1969.”

That was the year he started Doughboy’s in the Kmart Plaza on Shelburne Road; nine years later, he moved it to 85 Pearl Street. Boutin expresses some regret that he never purchased his building, saying, “I’ve probably paid enough rent to buy this corner.”

Rebecca Lemire, the property manager for Hinsdale Properties, says her company expected Doughboy’s would eventually leave on its own. She says in a written statement, “We felt it was time to end their lease. They’ve been there since 1979 and pretty much under the same lease. We have kept their rent so low for so long to help them stay afloat. Obviously, costs have increased since then and we could not afford to continue to carry that. They’ve been a great tenant and addition to Burlington and we wish them the best.”

Four months ago, Pam Scanlon — the co-owner of Radio Deli at 77 Pearl Street — saw that the Doughboy’s space was coming up for lease. Scanlon and her partner, Michael Niederer, contacted Hinsdale to inquire about renting the space to open a diner. “It’s something we’ve been thinking about for a long time,” says Scanlon of the expansion. “People in the neighborhood seem pretty excited.” She will call the business Pearl Street Diner and expects it to open this fall.

The diner will offer Radio Deli’s hot specials — such as meat loaf, mac ’n’ cheese, burgers and hot sandwiches — on a daily basis for lunch and dinner. As for décor, Scanlon and crew plan a light renovation. “We’re going to make it a little different and a little brighter. We’re not going to rip everything apart,” she says. The partners are unsure of how they’ll use the bakery, but the expanded kitchen space will enable them to take on more and larger catering jobs.

The diner will be an affordable neighborhood eatery with decent food, adds Scanlon, and she’d especially like it to be accessible and appealing to the area’s seniors. “My mom’s 82, and so I know this market really well,” she says.

As for Boutin, he says he and his wife, who worked with him until four years ago, are both ready for a change of pace. “She’s had her fill of it,” he says. The business is for sale, though if Boutin doesn’t find a buyer, some of the equipment will hit the auction block.

While Scanlon is excited to expand, she joins the voices lamenting the loss of a neighborhood fixture. “They’ve been there a long, long time,” she says of the Boutins, “and it’s hard to see them go.”