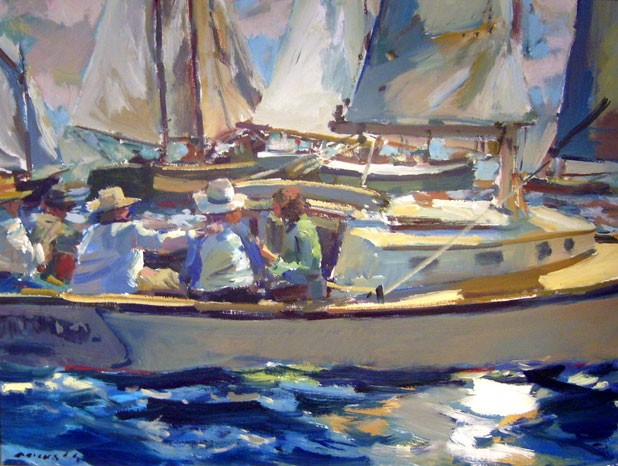 Vermonters are generally pretty thrilled when summer kicks into gear at last, but ongoing economic woes and other unsettling news can dampen even the cheeriest spirits. Perhaps that’s why Green Mountain Gallery curator and co-owner Sandra Noble decided to offset the doldrums by assembling a group show with the carefree title “Things That Make Us Happy.” The place is, consequently, an official angst-free zone. Thirty-five artists represented by the Stowe gallery answered Noble’s call with images of everything from pizza to pussycats to sailboats.

Cat lovers abound: Felines are the subject of an oil, an acrylic and a pastel. The 12-by-16-inch acrylic “Focused,” by Susan Goodby, is a minimal rendering of a pair of cats, their backs to the viewer, staring at something visible only to them, as cats do. Goodby captured the scene with just a few indigo brushstrokes on a white canvas.

Diane Bruns’ pulchritudinous kitty in the pastel “Cat Nap” is engaged in just what the title says. Only two hues — blue for the cat and red for the cushion it rests on — make up the color harmony.

Marilyn James’ “Purr-Fect” is a 12-by-16-inch oil of six American shorthairs and what appears to be a Maine Coon at the upper left. Dark lines define the pets, like the tracery of a stained-glass window. Contrary to its reputation, blue seems to denote happiness among cat fanciers — at least that color dominates all three of the kitty paintings here.

“Good Canadian Beer,” an oil by Phyllis Chase, focuses on two open beer bottles and two apples, a light seaside repast. She’s not the only epicurean in the show. Painter Colin Page is enthralled by cheese pizza, as well as peanut butter and jelly. The little oil “Pizza” is nicely gestural, yet realism is also evident in reflections on the tabletop. “Sandwich” is a well-organized composition in which Page alternates his grape-jelly purples and raw-sienna passages of peanut butter to divide the picture plane into quarters. The slippery jars are above, the well-slathered slices of white bread below.

Eric Tobin is one of Vermont’s premier landscape painters, but for this show he offers a lighthearted take on the theme. “The Painter’s Palette” is literally a square painter’s palette embellished with a spontaneously painted figure holding a stick, from which hues explode as he seems to wave it around. The piece demonstrates that even a serious artist can get pretty mirthful.

The largest, and perhaps most formal, canvas in the show is Charles Movalli’s “Sailing.” The 28-by-40-inch acrylic is heavily indebted to Renoir and other Impressionists whose light and airy narratives often depicted idyllic outings of the French bourgeoisie. Movalli’s boaters are similarly cheerful in the fresh breeze of a sunny day, and his brushwork is nicely broken up to render light and fleeting shadows across the boaters’ backs.

Several pieces of sculpture also appear in the show. The 3-foot-high bent-steel floor piece “Remembering Maria Tallchief,” by Hy Suchman, is a figure practically bending over backward in a dynamic and joyful pose. The daughter of an Osage Indian chief, Tallchief was an American prima ballerina. Suchman’s dancer seems weightless and full of grace.

A portion of sales from this exhibit will be donated to the Lamoille Community Food Share. Patrons are encouraged to drop off canned and dried-food contributions when visiting the gallery. Because — just like cats, boats and beer — a full stomach definitely keeps people happy.