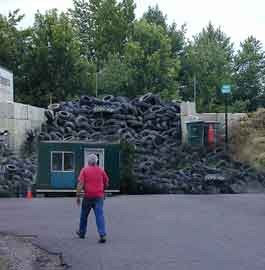 It’s no secret that Americans have had a long-running love affair with cars, but we don’t give much thought to the actual wheels that enable us to weave our merry way through the concrete-burdened landscape. Generally, we drive them until they’re bald, dread the day we have to cough up the dough for some new treads, and then cast the old ones aside like yesterday’s news. Tires, it would seem, are taken for granted.

Drive down any road and you’re bound to spot more than a few of the rubberized rounds — discarded on highway shoulders or on lawns, or tossed into the woods. Though responsible disposal costs less than a cheap date, tires nonetheless remain a not-so-picturesque part of the scenery.

“There’s certainly environmentally worse things that are being dumped all over the place, but they are unsightly, no question about it,” says Buzz Surwilo, who works in the solid-waste division of Vermont’s Depart-ment of Environmental Conser-vation (DEC). “The issue for a lot of people is finding tires on the side of the road or in streams, which drives a lot of the decision-making. They’re just ugly. When people start seeing them on the side of the road is when the legislators get excited about it.”

Tires and other substantial solid-waste items were banned from Vermont landfills after the state passed Act 78 in 1987. The ensuing rubber glut caused waste managers to get creative, inspiring projects that use tread shreds in everything from a septic system in Waterbury’s Little River State Park to “rubberized asphalt” in paving projects on Route 2 in Bolton and Route 100 in Lowell.

The experiments were facilitated by a Ferrisburgh tire processor — which has since gone out of business — where the worn-out rings were separated from their rims and “aggregated” into the desired chips known as “crumb rubber.” Though the particles proved to be comparable to more traditional road materials, their significantly higher cost was prohibitive and eventually spelled the project’s demise.

“Things were going great guns in the early ’90s, but nowadays, because all we have is whole tires to get rid of, we really don’t do a lot with them except ship them out of state,” says Surwilo. “The problem with tires is, they’re made to be durable and that works against them when you try to break them down into their components. It’s a tough, tough waste to deal with.”

It seems that Vermont is just too small to support a tire-processing plant. “It’s almost that we have too few tires,” says Surwilo. “It’s just not economical for somebody to set up a shop in Vermont simply to collect tires.”

Instead, Vermont’s annual 600,000-plus waste tires are shipped off to tire brokers in Massachusetts, Maine, Conn-ecticut and Quebec. Vermont has the fewest tires of all New Eng-land states — Massachusetts and Connecticut lead the pack at six million and three million, respectively. Nearby New York, with 19 million, is second only to Texas. Nationally, more than 275 million tires are discarded every year.

While some states are coming up with new ways to recycle old treads — new tires, truck bed liners, running tracks, shoes and floor mats — three out of four tires are thrown in with coal and burned as fuel in plants across the country. In New England, most of the rubber is used at paper mills in Maine or at a “tire-to-energy” facility in Connecticut. The tire-derived fuel is supplied by processors in Massachusetts and Maine, which collect the majority of tires in Vermont and around New England.

The practice doesn’t sit well with those who think green. “People obviously have environmental concerns about doing that,” says Surwilo, “but the truth of the matter is, they’re substituting for coal, which has its own environmental issues. It’s six of one, half-dozen of the other.”

As tires are loaded with oils, they can burn, baby, burn — evidenced by the towering tire infernos that have blackened skies across the country over the years. Close to home, an estimated 15-million-tire fire just 10 miles outside Albany, New York, last March could be seen for miles. If the nearby General Electric plant didn’t have its own fire-firefighting equipment, it might still be burning.

Surwilo toured the site shortly after the New York DEC shut down the Albany facility in 1999 and the owner of the massive tire pyre was seeking permission to set up shop in southern Vermont. “We were driving through canyons of tires that obscured the sun,” he says. “I’m not sure if regulators were asleep over there or not, but when those things go up, they’re a bear to try to put out, and the smoke and runoff is really toxic.”

Prior to the fire, the owner of the tire pile, Vincent Williamson, fled to Vermont and somehow convinced the town of Benning-ton to let him deal tires through a transfer station — a facility that’s generally used to service landfills. Working on his own without a Vermont environmental permit, Williamson quickly accumulated some 24,000 tires before the Vermont DEC moved in and shut down the operation.

Williamson had also paid a visit to the Brown Auto Service Center in Burlington, where he tried to offer his services to owner Ernie Laird. “We always get people coming in from New York, Maine, New Hampshire and Mass wanting to take our tires out,” Laird says. “Once a month, somebody comes in with a pretty business card and tries to sell you something.”

Laird says he has used the services of Barre’s Budzyn Tire, which picks up used tires at many of the tire-handling businesses — tire and car dealers, repair garages and oil-changing shops — that line Route 7, as well as others in Rutland and the Barre-Montpelier area. The tires are then sorted for possible re-sale at the used-tire shop, while others are sold to foreign markets as far away as Australia, according to owner Fred Budzyn. Most are sent to processing facilities, where they’re ground down and used for fuel.

“Sometimes we do a trailer a day,” says Budzyn. “When we’re picking up tires, we look at all those cars that are on the road and see all the future business that we’re going to have, because they’re all going to be swapping tires pretty soon.”

Car owners in Chittenden County have plenty of low-cost opportunities to dispose of worn treads. Most tire dealers will only charge $2 to $3 per regular-sized car tire, while the Chittenden Solid Waste District (CSWD) does even better at $1.75 per tire at its drop-off centers. The tires from all the centers are eventually brought to CSWD’s Williston site, where the cost of drop-off is a mere $1.35 per tire.

The district has had success with its free “tire and appliance roundups” in the spring and fall — one green-up day brought in a whopping 2600 tires. The roundups are helping to clear tire-dumping grounds in Westford, Milton and other areas around the county. “We’re really working… to educate people about how inexpensive it is to get rid of their tires if they just don’t let them accumulate,” says McArdle.

At the CSWD’s spacious center cut out of the Williston wilderness, neatly stacked tires crowd a huge tractor-trailer and are piled up on the ground nearby. About 35,000 tires per year are shipped from here to Routhier & Sons Scrap Tire Recycling in Massachusetts as well as to Envirotree/Recycletec in Quebec. Much of the material is transformed into speed bumps and parking curbs as well as playground surfaces and bovine mattresses, which keep the cows comfy.

Until the demand for waste tires inflates substantially, though, it’s going to be business as usual in Vermont, says Sur-wilo. “There’s no panacea market out there for tires. We just sort of stumble along and deal with them the best we can.