Dollar General Stakes a Claim — and Meets Resistance — in Royalton 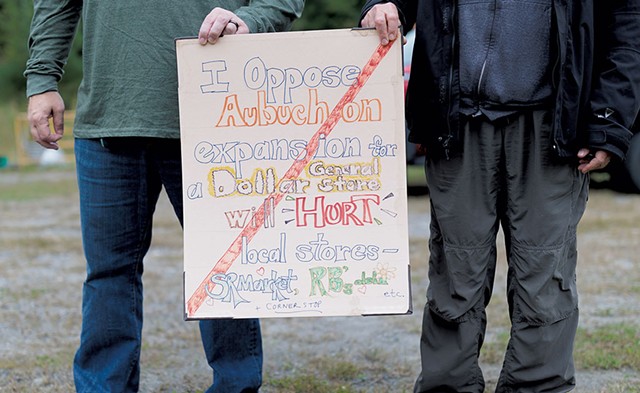 It's been almost six years since residents of Royalton fought off wealthy Utah businessman David Hall's plan to build a utopian city in rural Windsor County. Now, they're contending with a more familiar outsider: Dollar General.

The ubiquitous discount chain says it hopes to break ground soon for a store on Route 14 outside South Royalton village, a project that has provoked official opposition from the town and regional planning commissions. As in several other Vermont communities where Dollar General has made advances, the development proposal has divided residents. Some look forward to less costly shopping trips, while others worry about the effect of Dollar General on local businesses and the character of the town.

Local opponents say they already have everything they need in the village center: a quirky, independent food cooperative, a cozy coffee shop, an iconic deli and a reliable mini-mart. Home to Vermont Law & Graduate School, Royalton has some bustle despite its sleepy feel and modest population of 2,855. A bucolic image of the town is featured in the opening of the show "Gilmore Girls."

Last week inside the co-op, the South Royalton Market, a steady flow of customers picked up supplies for dinner. "This is the place people move to because there's not that kind of development," Marion Lent, an employee, said.

Dollar General — which has more than 18,000 stores in 47 states — has been expanding its presence in Vermont. The publicly traded company operates 39 retail stores in the state, a marked increase from the roughly 15 locations it had in 2013. It caters to rural customers who make less than $40,000 a year, according to an analysis from Business Insider.

Two earlier attempts by Dollar General to build a Royalton store failed to win permits under Act 250 — Vermont's land-use and development law — because the proposed locations, well outside the town center, did not comply with regional planning standards. The current proposal also locates the building outside South Royalton village, renewing concerns about sprawl and competition with local stores.

"When we undermine our downtowns, we ultimately undermine the viability of rural communities," said Ben Doyle, president of the Preservation Trust of Vermont, a group dedicated to protecting the Green Mountain State's character. And while Dollar General offers affordable goods, its profits are sent out of state, subverting the resilience of rural economies, he said.

Residents first became aware of plans to build a 10,640-square-foot building north of South Royalton village when Aubuchon Hardware submitted an Act 250 application. The land, next to a hayfield, is adjacent to the former Welch's True Value Hardware store and only about 15 miles from the nearest Dollar General, in Randolph.

While Aubuchon officials have claimed they don't know yet who the tenants of the new building will be, Valley News columnist Jim Kenyon dug up a "memorandum of lease" at the Royalton Town Clerk's Office that showed Dollar General had reached a 15-year agreement with Aubuchon Realty to occupy the proposed building.

Though Aubuchon told the Valley News that delays in the permitting process led Dollar General to walk away from the deal, local contractor Chad Barnaby told Seven Days he had been approached by a developer looking for help on a Dollar General in that location. (He said he turned it down, explaining, "We do not need another Dollar General on the planet.") In addition, Dollar General is advertising on LinkedIn for a South Royalton store manager.

"There's not a lot of goodwill based on the way they've gone about this, playing the hide ball game," Patrick Dakin, a member of the Royalton Planning Commission, said. "We feel rather disrespected at this point." Eamon Moran, president of Aubuchon Realty, which is based in Concord, Mass., said he had no comment regarding Dollar General's stake in the development permit.

In any event, Dollar General put the question to rest last Thursday. Responding to an inquiry from Seven Days, its public relations office said the company was finishing its due diligence for the Route 14 store. "Based on our current timeline, we anticipate to break ground in the near future," its statement said.

The store still needs state approval, though. Because Royalton has no zoning ordinance and the parcel is bigger than one acre, it's subject to Act 250 review.

So far, the District #3 Environmental Commission has conducted a site visit and a public hearing, at which the Two Rivers-Ottauquechee Regional Commission opposed granting the permit. Peter Gregory, Two Rivers' executive director, said the store would not comply with the regional plan, which states that principal retail should be located downtown — not in rural areas or along a highway. The Royalton Planning Commission has submitted a letter opposing the project on the same grounds. The Act 250 panel is still receiving written comments from stakeholders; a decision is expected later this fall.

Residents' reactions have been mixed. A post circulating on the Facebook page Let's Talk Royalton has garnered dozens of comments as residents expressed their opposition or support.

A number of residents are excited about a Dollar General in Royalton, which would offer affordable goods closer to home. Cheryl Clark, an employee of Visiting Nurse and Hospice, said her elderly clients — especially those on a fixed income — would benefit from a nearby Dollar General. They often ask her to purchase food for them at the Dollar General in Randolph because the prices are better than at Shaw's supermarket. For these community members, every penny counts.

"Not everybody can afford the town prices," Clark said. "I don't shop in town. The prices are too high."

Among those opposing the store is resident Hoyt Bingham, one of a dozen people who distributed petitions against locating a Dollar General outside the village. They gathered more than 275 signatures, 132 of them from Royalton residents — more than a third of the number who voted at town meeting last year — and submitted them to the town's selectboard and planning board.

"We're not saying we hate the store, that we don't want you to shop there," Bingham said. "It's really about what it does to the character of our community."

Bingham is aware the petition has no real weight. "I feel like we're kind of limited by the proceedings that are happening right now," Bingham said.

In the face of these divisions in town, the Royalton Selectboard has stayed neutral; chair Tim Murphy said he gets the arguments from both sides. For now, however, he wants more transparency from Aubuchon about who it's working with.

Back at South Royalton Market, Lent took a break from bagging groceries to consider the future of her town. Outside, rain poured steadily down. A customer stopped shopping to listen in.

Lent recalled how local opposition in Royalton and neighboring towns defeated Hall, a Mormon from Utah who had big plans to create a 20,000-resident community in the central Vermont hills, designed along lines laid out by Joseph Smith, the founder of Mormonism.

"We fought off David Hall," Lent remembered. "Who's to say we can't do it again?"