Doing Away With Discipline

In today’s elementary classrooms, children aren’t punished so much as praised 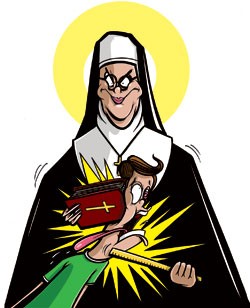 The Pippi Longstocking Halloween costume was perfect. An old dress shirt of my father’s made an appropriately raggedy pinafore, and some mismatched soccer socks completed the lower half of the look. With copper wire twisted into my long red braids, I was every bit the doppelgänger of that mischievous chatterbox of children’s fiction.

I was proud of my costume, not only for its authenticity but because it made me look like my heroine. I couldn’t wait to show it off in my sixth-grade classroom.

But when I arrived at school, my spirits dampened. I wouldn’t be taking part in my class’ holiday festivities. I had been naughty the day before, and Ms. Patterson had relegated my desk to the back of the classroom.

To make matters worse, my desk, which seemed miles away from my classmates, was surrounded on three sides by a tall cardboard partition. Not only would I not be able to join the fun, I wouldn’t be able to see it. And, perhaps even worse, no one would be able to see my genius costume, hidden from view as it was behind the cardboard wall.

Back in the 1980s, when I was in elementary school (sixth grade was still considered elementary then), this type of punishment was common for overly talkative students like me. Children would be removed from environments where they were apt to be disruptive and forced to take a place at the back of the class or beside the teacher’s desk — or on the linoleum floor outside the classroom.

Today, schools are very different places. In school districts around Vermont, you’ll no sooner see a child with his or her desk out in the hall than you’ll find a teacher flogging an insolent pupil. Those methods just don’t work, educators say. Now, the primary management focus in schools is on classroom community building and proactive discipline, and popular methods have names such as Responsive Classroom. Processing and student ownership have taken the place of humiliation and fear. And teachers are seeing results.

When Ellen Baker, director of teacher education at the University of Vermont, was in elementary school, she was the child who couldn’t stop giggling. She was sociable and wanted to be near her friends, she recalls.

But classrooms in the 1960s weren’t set up for collaboration, or any sort of close contact. The desks stood in prim rows, which often made children feel isolated and antsy.

“If you were a social being, it was hard,” Baker says.

When her giggling got to be too much, the teacher would reprimand Baker in front of the class. No warnings preceded the brutal admonishment.

Back then, classrooms were based on an authoritarian model in which the teacher was the supreme disciplinarian, says Baker, who worked as an elementary school teacher herself for 36 years before coming to UVM. Educators focused only on the academic curriculum, ignoring individual student needs.

Experts acknowledge that the disciplinarianism of the past, meant to correct bad behavior by humiliation and prevent its recurrence through fear, was counterproductive to the basic mission of elementary education — to teach children the foundations of knowledge while encouraging good citizenship. The consensus is that children cannot learn well when they are embarrassed, self-conscious or branded as trouble-makers.

While corporal punishment is still legal in 20 states, in Vermont students no longer experience institutionalized physical or emotional trauma. The 1970s saw the rise of a new concept of classroom management that gave the creative student more room to flourish. Open classrooms, which literally featured rooms without interior walls, allowed for movement and group work. Slowly, says Baker, classes began to look like communities.

That initial progress was short-lived, says Baker. In the 1980s, the increased emphasis on standardized testing and teacher accountability caused the open classroom model to fall out of fashion. It was replaced by whole-group instruction that teachers thought would achieve the appropriate academic results.

But the pendulum has since swung back. Today’s elementary classrooms are almost unrecognizable to people educated before the early 1990s. Desks are often positioned in groups of four to encourage collaborative work. In many classes, teachers favor group tables over desks because they give students freedom to perambulate as needed. Pods of students huddle together on carpet squares to solve math problems or practice spelling.

This is just the way it should be, argues Rebecca Haslam, a first-grade teacher at Champlain Elementary in Burlington.

“If a child isn’t comfortable in their space, you’re not going to get anything out of them,” she says.

For seven years, Haslam has used the Responsive Classroom model of management. This means her classroom ethic is based on mutual respect and trust and the notion that no one can learn effectively in their absence. In this model, children are not confined to desks, nor are they passive participants in their own learning. Often they are asked to help draft the rules of the class. No one is called out publicly for bad behavior, and one strike does not mean you’re out.

Other modern classroom-management models exist, such as Positive Behavior Interventions, in which teachers constantly monitor and evaluate student behavior. However, says Baker, Responsive Classroom has become the standard. In Burlington, the model is a district-wide policy.

In terms of discipline, here’s how a “responsive classroom” typically works: When a child is being disruptive, she is first offered a friendly reminder. In Haslam’s classroom, it sounds something like this: “I’m noticing you’re not paying attention. But I need you to listen.”

Children not following the rules in Jocelyn Cronin’s second-grade responsive classroom at Burlington’s Flynn Elementary will first hear, “What are you doing?” Cronin quickly follows up by asking the student what she should be doing, she says.

If the student continues to be disruptive, she gets a warning so she understands there are repercussions for her behavior. It’s important that children know there are “logical consequences” to their actions, Cronin says. The teacher’s words are not threatening or blaming; they’re matter of fact.

If the warning fails to work, the student will get an in-class time-out. Haslam may say something like, “You’re showing me you need to take a break.” The student retires to a quiet spot in the classroom, which is sometimes called a think space or a resting area, until she is ready to participate again.

Karin Ward, a third- and fourth-grade teacher at Allen Brook School in Williston, has been using the Responsive Classroom model with her students for years. Many of them, she says, like the in-class time-out. Some students choose to sit at the time-out desk voluntarily.

Occasionally, Ward installs partitions around some students’ desks — not to punish the children but to help them concentrate. Ward says students ask for the partition when they’re doing quiet work. They recognize that they’re getting distracted and need to be by themselves.

“They really get into the zone that way,” she says.

When the in-class time-out doesn’t work, the teacher may take the option of a buddy-teacher time-out. The disruptive student sits in a neighboring teacher’s room with other kids she doesn’t know. This isn’t meant to shame the student, the teachers say, but to remove the distraction and make her realize that, to be part of her own community, she must respect its rules.

Finally, if none of these steps work, teachers send students to the principal’s office, from which they are often asked to go home. The steps can be modified, Haslam says, when a student is posing a threat to his classmates.

While the Responsive Classroom approach seems a little touchy-feely with its “Show me...” and “I’m noticing...” language, many contemporary educators insist that it works. If the “social curriculum” isn’t in place, they argue, students will never master the academic curriculum.

“That’s what discipline sounds like now,” Haslam says. “It makes so much sense to children.”

For Ward, the first nine weeks of each school year are spent establishing a classroom culture where students have “buy-in” to the community. Students who help draw up class rules, such as the best way to walk down the hall or get ready for recess, are more likely to help enforce those rules, she says.

“You can get kids involved to create social pressure,” Ward says. “Then [when disruption occurs,] it’s not just my problem; it’s our problem as a classroom community.”

Responsive Classroom isn’t a perfect system. Some parents complain that teachers spend too much time on creating a positive classroom community and not enough on academics. Whether the method works depends largely on classroom dynamics and individual teachers, Baker argues.

“It doesn’t work in every situation,” she admits.

Still, in today’s classrooms, says Baker, children who feel good about themselves and their place in the world perform better. As the educational catchphrase goes, they are “available to learn.”

Educators have determined over the years that humiliation doesn’t work. They have also learned that most children respond to measured consequences — Jenny plays on the swing set unsafely, so Jenny has to take a break from swinging. Scott can’t do quiet reading without touching his classmates, so Scott sits in the think space.

But another goal of today’s responsive classrooms is to make those interventions less often necessary. While teachers of yesteryear were more reactive when it came to discipline, teachers today have adopted a proactive approach. Rather than saying “no” and “don’t,” teachers zero in and comment on the positives — “Jenny looks ready” or “Good job getting quiet, Scott.” In theory, students see their peers receiving praise and model their behavior to get similar attention.

This kind of nonstop acknowledgment can get exhausting, educators say. But it makes their classrooms more comfortable, focused and risk free.

Speaking of Back To School

Education education back to school