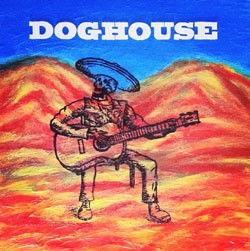 Doghouse is the pseudonym of Burlington-based songwriter Sean Kehoe. On his self-titled debut, recorded in the winter of 2012 and released this spring, Kehoe muses on familiar themes of life, love, sadness and, in that quintessentially Vermont way, lousy weather. Despite his predilection for overcast subject matter, Kehoe couches his melancholy in the decidedly sunny pop trappings of beach-friendly troubadours such as Jack Johnson and G. Love and, in the album’s best moments, late-’90s SoCal punk. The result is an amiable collection of tunes that, while derivative and sometimes rough around the edges, are elevated by Kehoe’s slacker charm.

The album opens on “Going My Own Way,” which, somewhat ironically, finds Kehoe openly aping the breezy campfire lilt of the aforementioned Johnson. But where the surfer-dude-turned-acoustic-pop-prince is often almost nauseatingly slick, Kehoe is endearingly clumsy. If it weren’t for the earnest quality in his delivery, you’d almost think the song was a send-up of Johnson’s Life Is Good-store aesthetic.

“21” is next and is a departure from the previous song’s bromantic bent. It’s also the album’s strongest cut. Over a lean, punk-ish progression that nods at early Sublime, Kehoe pines for the days before turning legal drinking age, when half the fun of partying was the game of trying get booze. “This old head is fading / This year I’ve just been wasting / I’m dying to be done,” he sings. Then, “What’s the catch for 21? / I remember it was much more fun / Before I was young.” Buoyed by his sleepy (hungover?) delivery, it’s a fun-loving sentiment of which the late Sublime front man Brad Nowell would likely approve.

Following the limp faux-funk of “Carpe Noctem” and the equally white-bread slow jam “A Little Bit,” Kehoe rebounds on the fist-pumping party anthem “Subliminal.” He follows that with another strong, punk-tinged cut, “Maybe It’s Me,” before getting his Holden Caulfield on with the hard-charging “Morons n Phonies.” Unfortunately, after the yowling grungefest that is “Ways to Kill a Monster,” Doghouse closes meekly on a pair of quieter tunes: a groove-lite cut called “Lollipops” and a schmaltzy acoustic ballad, “Hold On.”

The most rewarding moments on Doghouse are the loudest ones, partly because Kehoe just doesn’t have the vocal polish to pull off the lady-killing smoothness of a Johnson or G. Love. What he does have is a knack for writing slyly entertaining songs that, especially when given some muscle, are something close to sublime.

Doghouse by Doghouse is available as a name-your-price download at inthedoghouse.bandcamp.com. Doghouse plays Radio Bean in Burlington on Wednesday, July 31.