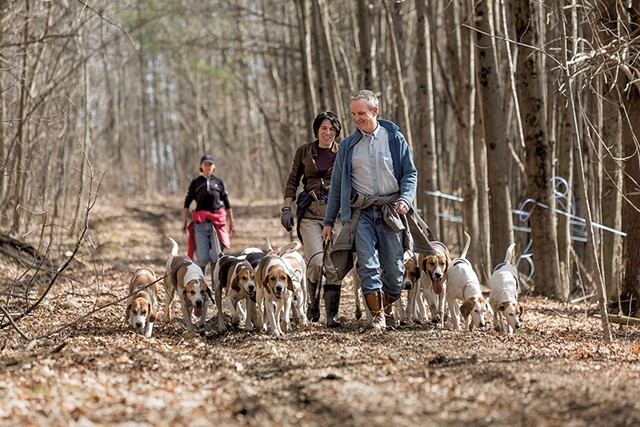 At home in New Haven, Sen. Chris Bray can redirect a wayward hound with a clap of his hands or a few select words, he said. "Pack in," he'll call, sending the dog back to his partner, Kate Selby, as they train the animal for fox hunting.

Bray exhibits an altogether different leadership style at the Statehouse in Montpelier, where no one is inclined to heel. The Democratic chair of the Senate Natural Resources and Energy Committee does not command his colleagues into compliance. There is more than one alpha dog among the renewable-energy advocates and critics who crowd his committee room.

"He's not a my-way-or-the-highway kind of chair," said Sen. Brian Campion (D-Bennington), one of five members of Bray's committee. "He's a listener. He wants to hear from everybody."

Slowly and methodically, Bray has steered his diverse committee this session to unanimously support a controversial bill that seeks to solve a seemingly intractable problem: siting large solar arrays and towering wind turbines in a way that works for both developers and project neighbors.

The bill, S.230, is meant to bridge a gap that has widened in Vermont over the past decade. On one side is the prevailing belief that Vermont should be doing everything possible to generate its own clean, sustainable energy. On the other are those who think the surge in wind and solar projects is threatening the state's natural beauty and livability.

The bill would give towns and regions greater influence — "substantial deference" in legal parlance — in state Public Service Board decisions about the location of renewable energy projects, if they incorporate energy siting into their municipal plans. The state Department of Public Service would certify those local and regional plans.

Not everyone likes the bill as much as she does, but most people following the issue have come to realize that soft-spoken Bray, 60, who looks more like a college professor than a politician, is tougher and savvier than he seems.

"I had my suspicions of him," said Rep. Tony Klein (D-East Montpelier), a veteran legislator who heads the House Natural Resources and Energy Committee. "I wasn't sure, knowing his gentlemanly personality, that he had the horsepower to take on such a tough subject."

Klein said Bray allayed those suspicions last year when he stood up to Senate President Pro Tempore John Campbell (D-Windsor) in the final days of the 2015 session. Faced with this same dilemma, Campbell made a last-minute push to amend an energy bill to allow towns to halt energy-siting projects — after Bray's committee had already rejected that idea.

In fast-moving negotiations, Gov. Peter Shumlin and Klein agreed to Campbell's measure in a deal to save the rest of the bill, which they wanted to pass. Bray was expected to go along.

"Everyone had agreed, except the committee of jurisdiction," Bray said. "It was very depressing."

Bray recalled the discomfort he felt at the prospect of selling out his own committee. He contemplated it for a night, then came back the next day, appealed to colleagues to stand up for the process and mustered enough votes to overrule Campbell. There were no theatrics, but Bray emerged as a force — albeit a slow-moving, bow-tie-wearing one.

"It changed my whole relationship with him for this year. He earned his stripes," Klein said.

Klein's committee is apt to alter Bray's bill when it reaches the House, but he buys into its basic concepts. Bray has won the guarded approval of some renewable-energy critics, too, even as they fight for changes.

"I think the bill is headed in the right direction," said Sen. John Rodgers (D-Essex/Orleans), a member of Bray's committee whose district hosts some of the state's largest wind projects. "I'm just hopeful we're going to continue to tweak it." Rodgers and others will be adjusting the bill as it hits the Senate floor this week.

"We think the bill does make some improvements," said Karen Horn, public policy and advocacy director for the Vermont League of Cities & Towns, but the group also has "quite a few remaining concerns." Almost half of VLCT's members — 111 towns — have signed a Town of Rutland petition calling for more say in solar siting.

"He's always very gracious, and he's willing to hear from everybody," Horn said of Bray. "But I'm not sure how well he understands the perspective of local governments."

Others are less diplomatic.

"I look at S.230 as an attempt to make it look like the legislature is doing something without actually doing something," said Mark Whitworth, president of Energize Vermont, an organization that has fought unsuccessfully for a moratorium on industrial wind projects. Whitworth is continuing to push for new noise standards for wind projects that would include ongoing sound monitoring.

When he took up the issue of renewable energy in Vermont, Bray expected to hear passionate arguments for and against. But he also wanted facts. So he studied up.

He took four classes last summer at Vermont Law School, exploring U.S. energy policy and how the electric grid works. "I always want to know more about something," Bray said. "If somebody said, 'We want you to remodel the second floor,' I would go down to the basement to get started."

The son and grandson of doctors, Bray considered following their footsteps before finding his own path. He grew up in New Britain, Conn., but both sides of his family have roots in Vermont. He studied zoology at the University of Vermont, and then found that his real love was for linguistics. He earned a master's degree in English at UVM.

Bray gets to indulge both interests at home in New Haven. He helps Selby run the 82-acre farm, on which they board up to 20 horses and 16 hounds. And he's got a home-based business, Common Ground Communications. Bray edited and published former governor Jim Douglas' 2014 biography, The Vermont Way.

Last summer and fall, Bray added assembly-line work to his résumé: "I needed work," he said of his stints on the production line at Vermont Coffee in Middlebury, where he'd worked previously as vice president.

He distinguished himself in the company break room, according to Vermont Coffee owner Paul Ralston, a Middlebury Democrat who served two terms in the state House. Bray was a member of the company's winning crossword puzzle team. "He has a lot of arcane knowledge," Ralston said.

That's a by-product of Bray's willingness to go where his interests lead him — including to the legislature. After being elected president of the Middlebury Area Land Trust, he wanted to learn how to run a meeting more effectively. So Bray enrolled in the Snelling Center for Government's Vermont Leadership Institute. The program took him to the Statehouse for a three-day immersion. "I was smitten with the place," he said.

When Rep. Willem Jewett (D-Ripton) mentioned in 2006 that Democrats were looking for a candidate to take on Republican incumbent Rep. Harvey Smith of New Haven, Bray threw his hat in the ring. "The chances of beating someone like that is nil," Bray said. "Luckily, I didn't know any of that."

Bray had lived in New Haven just two years at the time, but after knocking on 1,500 doors, he won by 51 votes. He served in the House for four years before running for lieutenant governor in 2010. He was bested by Democratic primary opponent Steve Howard, who went on to lose to Republican Phil Scott in the general election.

Howard remembers Bray as a tougher-than-expected opponent. "He doesn't take a room by storm. He sort of slowly makes his presence known," said Howard.

Bray returned to the legislature in 2013, winning an open Senate seat representing Addison County. He's in his second year as chair of the Natural Resources and Energy Committee — an appropriate position given the large number of controversial renewable energy projects in his Senate district.

New Haven, in particular, has attracted multiple solar farms, and town officials said they have felt like bystanders to the state's approval process.

Ralston doesn't think Bray's bill will give his hometown any more control. Instead of focusing on the siting process, the former legislator said, Bray should scrutinize incentives for renewable energy. In Ralston's view, they line the pockets of developers without benefiting local communities.

"S.230 does nothing for us," Tolles said, arguing that town and regional planning organizations don't have the resources to create the municipal plans that would give them more say in siting renewable projects. "It's ludicrous," said Tolles. On a scale of one to 10, he said, Bray "is a zero."

Bray wasn't surprised by his neighbor's assessment. The two men have long been at odds. The senator acknowledged that some of the New Haven solar projects could use better natural screening, but he doesn't want to limit the size and location of projects, as Tolles does.

S.230 offers financial help for towns and regions to create plans. It also provides incentives for renewable energy projects to be built in spots that towns and regions designate as preferable, such as old landfills and parking lots, Bray pointed out.

Energize Vermont's Whitworth has a problem with the bill's planning process. Giving the public service commissioner power to certify regional plans leaves municipalities at the political whim of the governor, he said. "You've got a great deal riding on a political appointee who could change every two years," Whitworth said.

After two months of deliberation, Bray has heard these complaints many times — and not for the last time. Meantime, the linguist finds inspiration in a book that might also prove useful to a herdsman. Quoting the Tao Te Ching, Bray said, "The best leader is one who, when the work is done, people say, 'We did it all ourselves.'"