Andrew Whiteford would like people to get one thing straight. Despite the fact that his family's dog biscuit business is named Andy's Dandys, he has never gone by "Andy."

"Don't say it!" Andrew said with a wide grin when this reporter dared mention the nickname at the company's Richmond bakery.

On a recent Thursday afternoon, Andrew, 29, had just walked down the street from his part-time job at Richmond Market & Beverage to his second part-time job. A few minutes after he bounded energetically through the door, his mother, Lucie Whiteford, suggested he change. Andrew immediately headed to the restroom to put on a bright-blue Andy's Dandys T-shirt.

Andrew's T-shirt matched the color of the unsweetened icing into which he then began to dip bone-shaped biscuits. He pulled each iced biscuit out of the bowl and placed it precisely on a parchment-lined cookie sheet, capably demonstrating the "master dipper" role emblazoned on his business card. "I do 1,200 in a week," Andrew said proudly.

Lucie and her daughter, Marie Claire Johnson, 38, stood by smiling. "It's hard to get hired when you have Down syndrome," Marie Claire said, referring to the genetic condition with which her younger brother was born.

"I love my business because people love what we make." Andrew Whiteford tweet this

Since 2008, Andy's Dandys has been baking dog biscuits in Vermonty flavors such as maple pumpkin and apple cheddar, made with only human-grade ingredients. The company ships 4,000 to 5,000 biscuits weekly to about 200 retail accounts around New England and offers national direct-to-consumer online sales. But the business does more than add value to the dog treat category.

The Whiteford family's goal when they created Andy's Dandys was to provide a supportive environment in which Andrew could build job skills and contribute productively to something he cared about. "It was the only way I was going to be sure he'd have somewhere to be and have something meaningful to do," Lucie explained. "It was for Andrew — a future plan for him."

That Thursday, the bakery smelled like warm cinnamon-walnut toast. "Everybody loves my doggie treats because they smell delicious," Andrew said. "I love my business because people love what we make."

Over the last year, the company received a boost from another locally born premium food business. Ben & Jerry's commissioned custom dog treats that were sent out as part of an early 2021 influencer publicity campaign for its new line of frozen Doggie Desserts. In response to its whimsical tie-dye-iced dog bones, Andy's Dandys saw a threefold jump in online sales and a 20 percent boost in retail orders over the prior February and March. Marie Claire said several promising leads are still percolating.

Andy's Dandys was a perfect fit because it's a Vermont-based company that, like Ben & Jerry's, takes great care with quality and ingredient sourcing, the ice cream brand's global marketing specialist Lindsay Bumps explained in an email. "Add in their mission of inclusivity, and the fact that Andy's Dandys treats are just so doggone good," Bumps continued, and the partnership was a natural one.

Soon after Andy's Dandys opened, the family saw an opportunity to broaden its inclusive mission. "When Andrew was doing it, other kids wanted to do it, too," said Marie Claire of her brother's work.

Lesha Rasco, a behavior analysis expert who had been Andrew's middle school special educator, joined the company in 2009. She aimed to expand training opportunities to reach more young people with different abilities and learning styles. Rasco developed a six-week program in which participants learned how to manage time and tasks, ask questions, and develop other essential job skills.

The Andy's Dandys team collaborated with several community partners to provide training opportunities for more than two dozen young people. In addition to Andrew, four have worked for the company, including one who is still a part-time employee.

The program has been on hold during the pandemic. Marie Claire, who holds a master's degree in special education and has experience as a case manager for families with young adults with disabilities, will work closely with Rasco when it resumes. They plan to create an approach that can be customized to specific participants' needs, Marie Claire said.

She credits her brother for inspiring and informing her career. "What is challenging when you have a child with a disability is, you want your child to be fulfilled. You want people to see them as capable," Marie Claire said. Through her case management work, she has seen "a lot of entrepreneurial spirit in families that can do that to support their child."

Back in 2007 when the Whitefords were exploring business ideas, they focused on things that Andrew enjoyed. At the time, the family had a small white rescue dog named Rosie.

"Andrew loved Rosie," Marie Claire said, "and he was her person." Her brother also loved to bake and watch food shows on TV, she recalled.

"We were always in the kitchen making something," Lucie agreed. "We said, 'OK, food and dogs. Let's do treats.'"

Andrew, then 15, and Lucie researched dog biscuit recipes with a focus on nutrition and taste. The learning curve was not too steep. "I knew how to bake cookies," she noted. "They're just really dry cookies."

Lucie started baking on weekends around her day job in media sales. As the business gathered momentum, she would wake up at 3:30 in the morning to make dough and bake before heading off to work. She devoted herself full time to Andy's Dandys in 2013.

The family knew the biscuits had to please both pet owner and pet. "We use ingredients that people find appealing," Lucie explained.

"And that dogs really like," her daughter added. "The canned pumpkin we use is the same stuff we make our pies from at Thanksgiving; the Shadow Cross eggs, the same ones we eat for breakfast. The Teddie Peanut Butter is the same stuff that goes in our sandwiches," Marie Claire listed.

"They're just nonsweet cookies," Lucie added. "People say, 'Oh, they smell so good, I could eat them.'"

In fact, people could eat them — and her grandkids do. Marie Claire's two children, ages 4 and 7, often nibble on Andy's Dandys biscuits. "They wanted me to pack them for snacks for school," Marie Claire said with a chuckle. 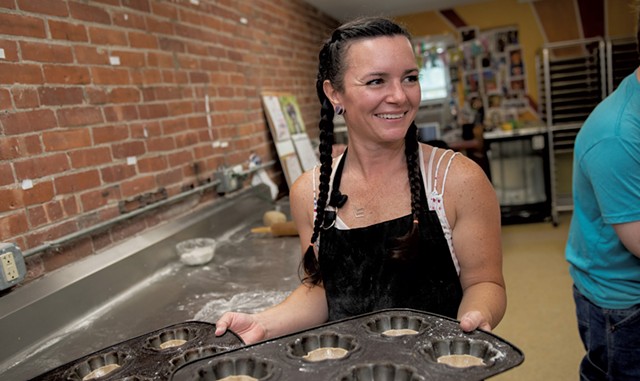 But tasting good doesn't guarantee success. Andy's Dandys has had help along the way, especially from others who can relate to the family's experience. Lucie landed the company's first big retail account in 2009, thanks to the general manager of 30 regional convenience stores who had a son with a disability. The company's baker of four years, Hilarie Mercer, grew up with a sibling with cerebral palsy and volunteered at a school for youth with disabilities.

"It helped me learn to communicate with people like Andrew," Mercer said between cutting out batches of biscuits. "Sometimes we talk about the same thing 20 times in a day, but it's OK. You just have to go with the flow."

The family sees ample evidence that Andy's Dandys has met its primary goal: Andrew has developed a strong work ethic, self-confidence and pride in his work. "Building this together helped him build a mindset of: This is how the world works. This is what is important, and this is being a productive adult," Marie Claire explained.

"He will pass up a creemee run because he's not done with his work," Lucie said, noting that her son is very fond of creemees. "I'll be here alone with Andrew, and he will out of the blue say, 'I love my business,'" she said. "That's what it's all about to me. That's music to me, that he feels so satisfied and fulfilled."

When he started his job at the Richmond Market 11 years ago, Andrew worked alongside an aide paid with Medicaid funds that the Whitefords received for support services. Within the store's encouraging environment, he now works independently — "the ultimate goal," Lucie said.

Andrew enthusiastically demonstrated how he uses a magnifying glass when working at the market to read product "best by" dates, in order to pull them from shelves and coolers. "I work four days a week," he said about his retail gig with evident satisfaction.

With his income from both jobs, the avid snowboarder buys his season pass and recently purchased a recumbent tricycle, which he called "more great news!" as he showed a photo of it. The shiny blue trike has allowed Andrew his first taste of independence on wheels, Lucie said.

Marie Claire is looking forward to restarting the training program. Supporting people like her brother toward workplace success "helps society to see how valuable people are, whether they have a disability or not," she said.

The original print version of this article was headlined "Training Treats"