Does Public-Access TV Still Matter in the YouTube Age? 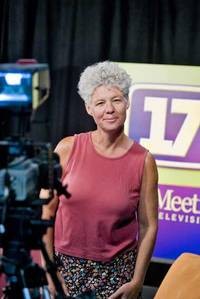 BURLINGTON — It’s hard to measure success in the unglamorous and often underappreciated world of public-access television. Chittenden Community Television (CCTV) channels don’t even register in the Nielsen ratings, and no one ever wins Emmys for their gavel-to-gavel coverage of city council meetings and water fluoridation debates.

But CCTV’s Center for Media and Democracy earned some much-deserved kudos two weeks ago when its executive director, Lauren-Glenn Davitian, took home the industry’s highest honor — the George Stoney Award for Humanistic Communication. The award, named after the “father of public-access television,” is given out annually by the Alliance for Community Media to a person or organization whose work promotes free speech, social action and public access to media outlets. Davitian, 46, was recognized at the group’s national conference in Minneapolis July 31 for more than 20 years of public service in promoting community-access television in Vermont.

Seven Days sat down with Davitian last week to talk about how far community-access television has come in two decades, as well as the many challenges it faces in the age of corporate consolidation, the Internet and video on demand.

Davitian, a New York City native, was one of the founders of Vermont’s public-access movement. When she graduated from the University of Vermont, in 1982, she wanted to “get her hands on” some video equipment but couldn’t find a local outlet to do so. She was aware that cable companies in other states had been compelled to provide channels, equipment and revenue to citizen groups. Armed with that knowledge, she approached Cox Cable — the precursor to Adelphia and Comcast — and asked for access to some of its equipment. As she recalls, someone on the company’s staff led her to a closet containing a dusty reel-to-reel deck and other outdated gear.

Soon Davitian was out raising public awareness about the right of citizens to create their own TV programming through cable subscribers’ user fees. “Once people heard the story of what public access was, it took no persuading at all,” she recalls. “All we really needed was their support to go to the Public Service Board.”

In the early 1980s, citizen advocates were a rare sight at PSB hearings. Environmental groups were just beginning to intervene in some cases, but public involvement in cable and telecom issues was virtually unheard of, at least in Vermont. Davitian, along with a group of other “likeminded activists” and the support of then-Burlington Mayor Bernie Sanders, successfully petitioned Cox Cable and the PSB to set aside and fund citizen-run cable channels in Burlington, Rutland, Montpelier and Middlebury.

Today, there are 25 “access centers” throughout the state operating 42 different public-access channels, including three in the Burlington area alone. Of the more than 120,000 cable households in Vermont, nearly all are served by an access center that provides a range of media services.

But there’s more. In 1987, Davitian helped draft Vermont’s first cable statute; she started the first community technology center in Vermont, now known as Cyberskills-Vermont; and, she launched the state’s first government-access channel, Town Meeting TV. Today, Channel 17 is accepted as the “media of record” for public meetings in Chittenden County with a soon-to-be searchable online archive of more than 22,000 programs.

Desite such accomplishments, Davitian is often asked whether public-access television is still relevant in the age of YouTube. Her reply: These are both the best of times, and the worst, for community media advocates.

On the one hand, people are more technologically savvy, interested in creating their own programs and have access to inexpensive and easy-to-use video equipment. And, there are more avenues than ever for showcasing citizen-produced programs, both on publicly operated cable channels and the Internet.

At the same time, she points out, “Free speech is more than just shouting out into the wilderness . . . Just because you can post something on YouTube doesn’t mean you have free speech.” In that sense, the mission of CCTV’s Center for Media and Democracy is as relevant as ever: People still need to learn how to think critically about the media they consume. And, they need to know which tools are the most effective at reaching a targeted audience and mobilizing people to action.

Davitian says that while the Internet has enormous potential as a democratizing agent, there remains a huge digital divide, mostly along economic lines. “Time magazine can say, ‘You are the person of the year,’” she explains. “But the reality is, the ownership structure is still in the hands of the few.” In fact, when Davitian helped create public-access television in 1984, there were 50 cable companies in Vermont. Today, there are 19. The two largest — Comcast and Charter — now command 90 percent of the cable market. Moreover, Vermont’s “churn rate” — that is, the number of people dropping cable TV in favor of satellite TV, which doesn’t carry community-access channels — is the highest in the nation.

Those who’ve worked with Davitian, or “L-G,” say no one is more deserving of the 2007 George Stoney Award. “She knocked my socks off,” writes Karen Tokat, a board member with Chittenden Community Television, one of 30 people who nominated Davitian for the award. “She sparked a community and a state with the idea that the public has the right to, and the need for, access to the means of television communication, and this access grew throughout the state.”

Karen Toering, co-director of the Seattle-based media advocacy group, Reclaim the Media, agrees. “In my book, L-G’s gentle and articulate leadership is stellar,” she says. “I often look to her opinion and guidance when working on issues.” And Vermont media educator and reformer Rob Williams calls Davitian “the spiritual godmother of Vermont community cable access.”

For her part, Davitian emphasizes that she couldn’t do her work alone and credits the many people who made CCTV a community endeavor that keeps corporate media at bay. “I view the entire media-industrial complex as a giant door that is shutting out local voices,” she says. “We have our foot in the door, and all I can hope to do is keep the door from shutting entirely.”