Does Lightning Ever Strike the Same Place Twice?

Is there any credence to the adage, "Lightning never strikes the same place twice"? Ask Mary Powell and Mark Brooks, whose South Hero home was destroyed by fire last month after lightning hit their property twice in one hour. WTF?

Here's how it went down: On the evening of June 28, firefighters from South Hero Volunteer Fire Department and surrounding towns responded to a fire at 42 Sweeney Farm Road. According to state fire investigator Det. Sgt. Todd Ambroz, Brooks was home at the time and witnessed the first strike at 5:21 p.m. Though it didn't hit the house directly, it knocked wind chimes off a nearby tree, tripped a circuit breaker, and left burn marks and holes in the ground. Brooks reportedly left the property about a half hour later, only to return to find the house engulfed in flames.

Ambroz offered two theories for how the fire started. He suggested that the home's underground sprinkler system may have attracted the initial strike. Although the pipes were made of PVC, he suggested that the water inside them could have conducted the electricity into the house, which blew the circuit breaker and left something smoldering.

His second, more probable theory is that a second strike, documented at 5:56 p.m., hit the house directly, setting it ablaze and killing four of the family's pets. However, because the $1.7 million home was totally destroyed, Ambroz said there's no way to know for certain.

Still, the first strike was a powerhouse, he added. According to a report generated by STRIKEnet, a nationwide system that tracks the location, frequency and strength of lightning flashes, the first one registered at 16.8 kiloamps, or 16,800 amps.

"That's like holding onto three transformers," he said, with unintended irony — Powell is president and CEO of Green Mountain Power, the state's largest electric utility. 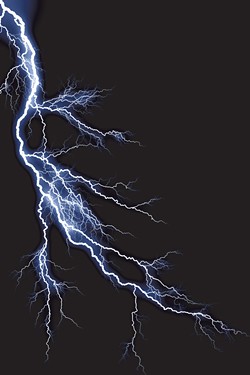 Lightning-induced house fires aren't rare. In 2010, 4,100 of them injured 32 people and caused $333 million in direct structural damage, according to the National Fire Protection Association. How often does lightning strike the same spot? Apparently it's not that rare. Data from the National Weather Service indicate that New York City's Empire State Building averages nearly 100 strikes each year.

Indeed, the STRIKEnet report that Ambroz used for his fire investigation revealed that, during the 24-hour period when the South Hero fire occurred, 46 cloud-to-ground strikes were recorded within a five-mile radius of the house.

If you think that's a lot, you're not a meteorologist like Ron Holle, who works for the National Lightning Detection Network in Tucson, Ariz. NLDN is owned by Vaisala, a Finnish company that offers products and services for environmental measurement. Vaisala also generates STRIKEnet reports and tracks lightning over the lower 48 states.

According to Holle, 46 lightning flashes within a five-mile radius "is not especially noteworthy," as he sees much higher figures elsewhere in the country. In fact, Vermont's "flash density" is much lower than that of many other regions, Holle noted. From 2006 to 2015, Vermont averaged just three to six flashes per square mile annually; in comparison, parts of Florida and the Gulf Coast averaged 28 or more.

As for cloud-to-ground strikes, Holle observed that Vermont's numbers can vary wildly from year to year. In the last decade, they ranged from as few as 13,364 strikes annually in 2009 to 53,638 in 2007; the average was nearly 30,000 ground strikes yearly. Holle observed no clear trends showing either an increase or decrease in Vermont's electrical-storm activity.

As June, July and August are the most common months for thunderstorms, what's the best way to avoid getting buzzed by a bolt? First, whenever a thunderstorm approaches, move away from trees and other tall objects and get indoors or into a hard-covered vehicle ASAP. It's a myth that the car's rubber tires insulate you; actually, the vehicle's metal body conducts the electricity to the ground. But it's still better to be in a car than outside. If you are in a building, stay away from windows, plumbing, metal doors, wired phones, computers and other appliances.

Also, never assume that lightning won't strike you unless it's raining. Lightning often hits three miles or more from the center of a storm, well beyond its rain and storm clouds. "Bolts from the blue" have been known to hit people 15 miles away.

Another popular misconception to dispel: If you're caught outdoors, crouching or lying on the ground does not make you safer from lightning. The NWS warns that lying flat actually increases your odds of exposure to a ground current. And don't waste time removing metal from your pockets. As the NWS advises, "The presence of metal makes absolutely no difference on where lightning strikes."

Though lightning kills more people annually than do tornadoes and hurricanes, even those deaths are rare. According to an NWS lightning safety report, from 2006 through 2013, 261 people were struck and killed by lightning in the United States.

Statistically, lightning kills women far less frequently than men; the latter account for 81 percent of all electrical-storm fatalities. Some two-thirds of those deaths occur during outdoor leisure activities. Fishermen were three times more likely than golfers to get struck, Caddyshack notwithstanding. These findings don't mean that lightning doesn't like ladies. It could be that, at any given time, more men than women are outdoors. Or that during an electrical storm, men are more likely to say, "I don't think the heavy stuff's gonna come down for quite a while."

As for Powell and Brooks' recent misfortune, this wasn't even the first time they lost a house to fire; their previous home burned down almost exactly 20 years earlier. But, according to Powell, that fire wasn't due to lightning but rather to a contractor who was installing a new roof. That, and miserable luck.