Does Copeland Hanzas Have the Game to Be House Speaker? | Politics | Seven Days | Vermont's Independent Voice

Does Copeland Hanzas Have the Game to Be House Speaker?

"Let's go to the big room," urged Copeland Hanzas, meaning the House chamber, where her fellow members were gaveling into a joint session with the Senate to vote on state college trustees. He sat on his aunt's lap for about 10 minutes in the ornate room and then, as per her instructions, quietly walked past a row of senators to resume playing with the train set in a back room.

Her decision to take a rambunctious 3-year-old into the Statehouse speaks volumes about Copeland Hanzas. She is similarly unfazed managing the 85-member Democratic caucus or negotiating with the rest of the House members: 53 Republicans, six Progressives and six stray independents.

The 45-year-old Democrat from Bradford works as a legislator, runs the Local Buzz coffee shop in town and is raising three teenage daughters — all while appearing unfailingly calm. Framed by long blond hair, her cherubic face is almost always smiling.

What gets her riled? Coming in to work the lunch shift at the café, her 17-year-old, Bekah, had an immediate answer: "Politics."

Copeland Hanzas doesn't disagree. Bradford's Oxbow High School class of 1988 chose her "most likely to have an opinion."

What her classmates knew, her colleagues are finding out. Copeland Hanzas is settling into her second year overseeing House Democrats, and, with Speaker Shap Smith (D-Morristown) stepping down next year, she's considered a likely successor for his job.

Is she ready for what is arguably the second most powerful position in state government? Does she want it? Those are questions that House members — including Copeland Hanzas herself — are starting to ask.

"I'm on my list of people I think should consider it," she said with the firm-but-friendly tone that puts toddler Oliver, her café customers and her House colleagues at ease. Generally speaking, "I like to look around and see who's got the skill set. If it seems to me like I'm the person most suited to do that task, I step up and do it."

Others who work closely with Copeland Hanzas are more direct. "She wants to be speaker," said Rep. Tony Klein (D-East Montpelier).

Not all the current House members will be involved in choosing a new leader next January. They have to get elected first, in November. But many are buzzing nonetheless about who might be the next Smith, an eight-year veteran of the job.

Colleagues say Copeland Hanzas has stepped up her game.

"I've been impressed by the way she's growing into the role of majority leader," said Rep. Chris Pearson, the Progressive caucus leader from Burlington. "She has her feet firmly planted under her on both policy and politics. She's been easily in command of the details."

House Minority Leader Don Turner (R-Milton) likes her straightforward manner, even as he disagrees with her politics. "Sarah will flat-out tell you, 'No, I'm not going to do it,'" Turner said. "If she says she's going to do it, she does it. I feel I can trust her."

"Her strength is sort of the breadth of her experience," said Smith, though he won't weigh in on who should succeed him. A speaker, he said, has to be well versed in budget and tax issues. Although Copeland Hanzas has not served on those committees, "She has been paying a lot of attention over the last few years to budget issues."

Copeland Hanzas likened her wrangling role to a combination of mom and coach. "Sometimes, it's like being a referee," she added.

The sports metaphor is apt. Beneath the motherly exterior, she is a driven competitor. In high school, the 5-foot, 5-inch Copeland Hanzas played third base on the softball team, field hockey goalie and forward on the basketball team.

She still plays b-ball with a group of legislators, staff and lobbyists every Friday morning during the session. "She can throw elbows with the best of them," said Rep. Tim Jerman (D-Essex Junction), a slight 67-year-old who occasionally joins in. "She knocked me over one time."

The second of four children, Copeland Hanzas was a year old when her parents, Tim and Jenny Copeland, moved from the Chicago suburb of Lake Forest to Corinth. Three years later, her father started Copeland Furniture in nearby Bradford. He still designs, manufactures and sells hardwood furniture there.

Tim Copeland helped shape his daughter's politics. Debating him — a Republican — she learned to articulate and defend a different point of view. As a result, "I understand and identify with the conservative mind-set," said Copeland Hanzas.

She studied history and geology at the University of Vermont, where she met her husband, Burlington native John Hanzas. He's now a geoscientist at Stone Environmental in Montpelier.

The couple started their 22-year marriage in her hometown of Corinth, before moving to nearby Bradford. Copeland Hanzas served on the school board while still a young mother and started to take notice of state issues that were tearing Vermont apart. "The whole civil unions backlash really bothered me. That didn't feel like the true Vermont to me," said Copeland Hanzas, noting that the side of a barn in her legislative district still reads "Take Back Vermont."

Disappointed by the way Republicans and Democrats were representing Bradford, Copeland Hanzas decided in 2004 to step in. She challenged Democratic incumbent Wayne Kenyon in a primary and won by a wide margin, 392 votes to 194.

Her legislative district remains an eclectic political mix. She estimated that 20 percent of Bradford is Republican, 20 percent Democratic and "everybody else is in the middle. This is real Vermont."

Copeland Hanzas commutes an hour to Montpelier four days a week from January to May to serve in the legislature. With three daughters — now ages 19, 17 and 15 — she said "chaos and multitasking" are a way of life.

"Just as the kids got older, I started this business," she said on the morning before Town Meeting Day, as she sipped coffee at a window seat of the Main Street café she opened six years ago.

It helps to have family around. As she spoke, her mother stopped by the café. Daughter Bekah, a senior at Oxbow on school vacation, was on the clock. Copeland Hanzas expected her father, whose furniture store is right down the street, later for his daily visit.

She knew almost every customer. Bruce Murray, a local potter, came in for minestrone and coffee. He and Copeland Hanzas chatted about pending legislation to legalize marijuana, an issue she has said is not a priority. Pass it, he advised, but make sure it's well regulated. 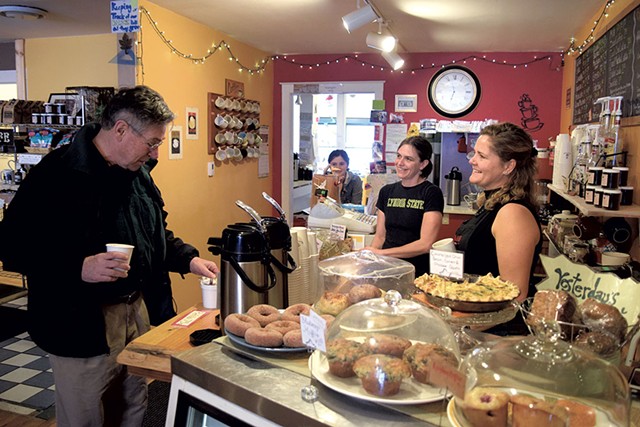 Copeland Hanzas leaves most of the cooking to her employees, but she does the company books. The café, which has a children's play area and a "Karma Share" board where customers can spot each other a latte or lunch, is part mission, part business. "We thought Bradford needed a coffee shop," she said.

Running a small business informs her work in Montpelier, she said. Before lawmakers passed a bill this year mandating that employers provide paid sick leave, Copeland Hanzas wanted to ease the financial burden the legislation would place on small businesses. She worked to delay the date the law takes effect and to reduce how much leave employers have to offer.

Speaker Smith said her experience as a small-business owner reassured other lawmakers: "When she signed on to the compromise, it was a big deal."

Copeland Hanzas said she also learns about business burdens from her father, whose furniture company competes with manufacturers that operate more cheaply in China. "We've talked a lot about workers' comp," she said.

Turner, the Republican House leader, isn't convinced. He said he doesn't think Copeland Hanzas has a realistic picture of what Vermont business owners face. "I bet her family does not live off what she makes at her business," he said. "If it was her livelihood, it would be a different story."

Copeland Hanzas can be hard to peg on the political spectrum. Turner said he considers her more liberal than Smith, based on her past support for increased taxes: "If she's speaker, I think it's probably going to be a more liberal direction."

Pearson, the Progressive leader who served on the House Health Care Committee with her in previous years, wishes Copeland Hanzas was more liberal, noting her "resistance" to policies such as legalizing marijuana and paid sick leave — though she ultimately supported the latter.

Copeland Hanzas describes herself as a "moderate," and Pearson agrees. She's concerned with classic Democratic Party issues: women's reproductive rights, health care, voter rights, benefits for those on low incomes. "This push to tell middle-class people they ought to blame poor people for needing Medicaid and food stamps ... It's just not right," she said.

But last year, she took a position on childhood vaccination that surprised and puzzled some colleagues. The state mandates that children in public schools get vaccinated; lawmakers considered whether to drop a "philosophical exemption" that allowed parents to make that choice.

The mother of three and former science teacher had vaccinated her own children. But she resisted the notion that the state should make the decision for families, preferring education over mandates. Copeland Hanzas defied many of her fellow Democrats and voted to keep the exemption.

"It felt sad to me," she said. "These parents don't come to these decisions lightly."

The measure passed anyway. But her behind-the-scenes lobbying to preserve the philosophical exemption alienated fellow House Democrats, who thought the majority leader should be uniting Democrats, not dividing them.

Copeland Hanzas said she learned from that vote. "When you come down on opposite sides with people you usually agree with, it's important to be careful," she said.

"That made people really scratch their heads," Klein said. "That put a big question mark beside her. She has a very strong will."

Colleagues are still coming to understand that about Copeland Hanzas. And they're considering whether it would make her a strong leader — or someone who'd be tough to follow.

Those who've met her on the basketball court suggest she knows what it takes to lead. "She's fearless," said Rep. Mike Mrowicki (D-Putney). "But she's a team player. She's a really good shooter, passes the ball well, sets picks."