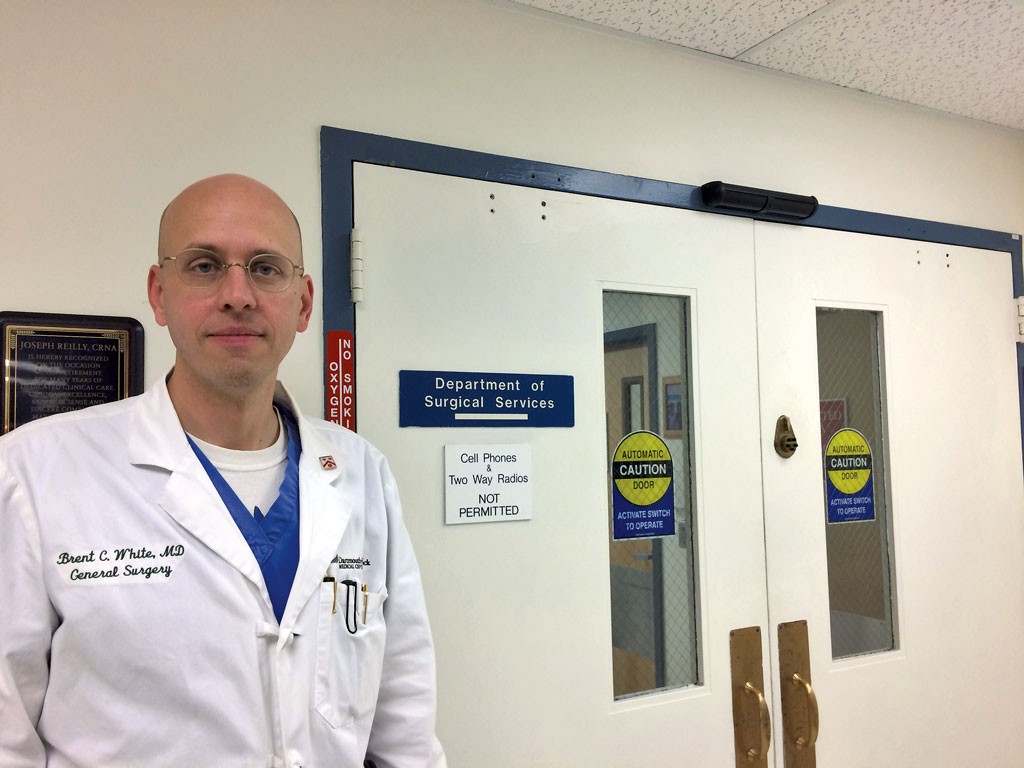 Three days a week, Dr. Brent White mends hernias, removes gallbladders, slices out sections of bowel and excises skin lesions at Mt. Ascutney Hospital and Health Center, a 35-bed facility on a hillside outside of Windsor.

The 41-year-old general surgeon is an increasingly rare breed in medicine, one who eschewed a surgical subspecialty in favor of "doing a little bit of everything," he said. He considered eye surgery while in medical school at Duke University but decided against it: "It is so confining. You almost lose sight of the rest of the human being."

White is also unusual in that he chose to work at one of Vermont's smallest hospitals and in a field — general surgery — in which the number of doctors is declining.

In the hospital's deserted cafeteria last Wednesday, White said he came to Mt. Ascutney in February 2013 after four years in Cooperstown, N.Y. He is actually an employee of Dartmouth-Hitchcock medical center in New Hampshire, the teaching hospital where he did his residency.

If Mt. Ascutney had tried to recruit him on its own for a general surgical position, White said he would have declined. "It would have limited my ability to take care of sicker people," he said, noting that he can do more complicated procedures on his patients knowing he has backup at Dartmouth, 20 miles away. He also gets to consult with peers at the larger, more sophisticated hospital and its affiliated medical school, where White is on the faculty.

What is the next generation of doctors looking for? Dressed in a white coat over blue surgical scrubs, White said, "People want collegiality, and it is hard to expect people to carry a pager every night."

Such arrangements might be what it takes for rural Vermont hospitals to attract the right doctors — and enough of them — in the future. A study released in March by the Association of American Medical Colleges predicted a national shortage of 46,000 to 90,000 physicians by 2025, especially in the areas of primary care and general surgery.

The national trend is confirmed by the Vermont Department of Health, which surveys doctors every two years, when they renew their licenses. Its yet-to-be released 2014 report indicates that psychiatry and general surgery have been harder hit than other fields. Since 2010, the state has also experienced reductions in the number of primary-care doctors and those in certain specialties, such as urology.

Explanations for the local shortages range from doctor demographics to fear of health care reform.

Between surgeries on a recent morning, Dr. Mark Plante, chief of urology at the University of Vermont Medical Center, recalled a sharp decline in the number of doctors in his field in Vermont a few years ago. Ten left the state in rapid succession. Suggesting that "You have to have a reason to come to Vermont," because it means "taking a pay cut," Plante said, "There's more money to be made in other states." He said one urologist doubled his salary by moving to North Dakota.

He added, "I don't want any of my statements to suggest I'm crying poverty, because I'm not."

Plante said several of those departing urologists relocated because of worries about the state's planned move to a government-financed health system — an initiative subsequently abandoned by Gov. Peter Shumlin.

"I'm Canadian. I believe in the universality of access to health care," said Plante, a Montréal native, who received his medical training at McGill University and came to Vermont to practice and teach in 1996. But the many unknowns associated with the untried system proposed in Vermont spooked some doctors, he said: "They didn't want to be caught with seismic change that wasn't national."

The shortage of primary care in Vermont isn't as dire as it is elsewhere. That's in part because the total number of practitioners has increased, if you count advance practice nurses, midwives and physician assistants among them, as does a 2013 report by the Area Health Education Centers Program.

Dr. Charles MacLean, associate dean for primary care at the UVM College of Medicine, characterized the state's current primary-care workforce as "pretty stable" but acknowledged, "It could be bigger and have everyone be busy."

Particularly outside of Chittenden County, family doctors are at risk of becoming an endangered species — in part because of their senior status. A quarter of the primary-care workforce in seven of 14 counties was older than age 60 in 2010, according to a physician survey conducted by the health department.

Dr. David Coddaire, a family-medicine physician at Morrisville Family Health Care and president of the Vermont Medical Society, predicted that a wave of retirements could create problems. "I'm over 60," he said, "but I remember a time when all the primary-care people here were referred to as kids. I wonder what is going to happen here."

Data from the soon-to-be released physician survey reveals that percentages of older doctors were even higher for neurologists, ophthalmologists and psychiatrists.

Dr. Mark Schultz, a psychiatrist who has practiced in Chittenden County since completing his residency at UVM in 1984, said patients already struggle to get appointments with psychiatrists. During the past decade he has turned down about 250 people a year because he was already fully booked.

"I'm 64 and would like to move towards retirement," Schultz wrote in an email sent while he was vacation — one colleague said it's exceedingly rare for him to get away. "But there is literally nobody I can identify to refer my patients to," said Schultz. He sends some stable patients to their primary-care physicians for treatment, and he spends one afternoon a month assisting an internal-medicine practice by treating patients who couldn't get in to see psychiatrists. "This is clearly a plan-B, stopgap solution," he said.

There is no clear reason for the shortage of psychiatrists, according to Schultz. "The state of psychiatric care and practice has never been as sophisticated or as well accepted as it is today," Schultz said. He described the climate in Chittenden County for psychiatric practice as excellent, noting the academic programs at UVM and quality of life in the region.

At the same time, Schultz said, meaningfully, "Psychiatrists are among the lower earners within the world of medical practice, so medical students who graduate with loan debt in the hundreds of thousands of dollars feel more of a need to choose specialties that come with higher income guarantees."

A $400,000 tab isn't keeping fourth-year medical student Therese Ray from pursuing family medicine in the Green Mountain State. "One of the major needs is for primary-care providers, and my interests luckily align with those needs," she said. "My goal is to stay in Vermont and to have a rural practice."

She isn't put off by the "paperwork," either — something Coddaire said has increased dramatically for primary-care practices since the advent of electronic health records.

And she rejects the theory, held by some students, that the field requires less talent. "I personally believe the opposite is true," she said. "We need a lot of talent and vision to continue to transform primary care and meet the needs of Vermonters."

To accomplish that, Ray argued, "We need to make pursuing primary care more affordable." The state offers loan repayment grants to primary-care practitioners — nurses and midwives, as well as doctors — who promise to work in the state for at least two years. The maximum total grant per student is $20,000, and the size of the pot varies depending on the legislature's generosity.

Donovan sees it differently at Mt. Ascutney Hospital. "For us as an organization and for the state of Vermont, recruitment can't be done based on financial packages," he said. There are other tools: for example, hiring full-time "hospitalists" — often family-practice doctors or internists — who handle the hospitalized patients of general practitioners. That has "helped tremendously in recruiting primary-care physicians" who don't have time to leave their offices to make twice-daily hospital rounds.

Passive recruitment can be effective, too. Nothing draws docs to Vermont more than to attend the highly regarded medical schools and residency programs at UVM Medical Center and Dartmouth-Hitchcock. "There is a fairly strong correlation between where you went to school, where you did your residency, where you grew up and where you end up practicing," MacLean, the primary-care dean, said.

According to the 2010 physician survey, 35 percent of Vermont doctors attended medical school or completed a residency at UVM. To some degree, that means the admissions department can shape what the state's medical community looks like.

Ultimately, the combined attributes of Dartmouth-Hitchcock and Vermont drew Brent White back to the home of his residency. The Mt. Ascutney surgeon, who resides in Hartland, originally looked for positions outside of big mid-Atlantic cities, close to family. Cooperstown, N.Y., didn't work, but the Upper Valley was compelling. It was the best of both worlds. As he put it: "To return to Dartmouth and Mt. Ascutney seemed like a great opportunity to remain in a rural setting while working in a sophisticated medical center."

The original print version of this article was headlined "Doctor Yes: Vermont Improvises to Attract Physicians"