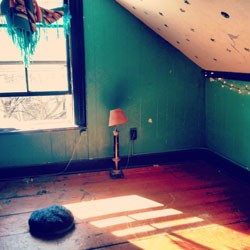 Damn you, Villanelles. First, you go on hiatus after releasing one of the best local indie-rock recordings in recent history, 2011’s Kiss My Grits. Then, just when word leaks that your long-awaited follow-up is pretty much in the bag, your front man, Tristan Baribeau, up and moves to Alaska. Like, polar bears and Sarah-effing-Palin Alaska. Now we’ve gotta wait like, three months until he comes back to hear the album. It’s enough to make a man, well, want to move to Alaska. But that’s beside the point.

The point is: “Northern Exposure” was an awesome show.

The other point is that before he left, Baribeau was kind enough to release a new record under his solo-ish side-project sobriquet, Doctor Sailor, called The Greatest Lyric. And anxious Villanelles fans should find a lot to like in its breezy tones.

“Laying It Down by the Ocean” opens the album as if dropping the top on a convertible for a seaside cruise. It’s light and airy, but Baribeau infuses an undercurrent of longing beneath a buoyant lead-guitar riff, evoking dusky, late-summer melancholy.

It’s a mood that proves pervasive, but not overbearing, through much of the record. “Campsite,” for example, continues the vacationland nostalgia trip, contrasting a sepia-toned melody with still more wistful longing. But here, and on cuts such as “Lines on Your Face,” “Ganesha” and the somewhat tongue-in-cheek ballad “Sad Bastard Syndrome,” Baribeau strikes a balance between confessional songwriting and sly humor, employing bright, nuanced arrangements that lighten the emotional load.

As Doctor Sailor, Baribeau is more introspective than the frantic dynamo we’ve come to know and love as the front man for Villanelles. In a sense, these songs could be viewed as skeletal versions of Villanelles tunes, the bare bones under all that fleshy keyboard bombast and guitar jangle. But that’s not quite accurate. There are certain discernible similarities between the two projects, especially melodically. Heck, he’s even snagged a couple of bandmates for guest instrumental turns, including drummer Seth Gunderson and bassist Evan Borden.

But the fare making up The Greatest Lyric generally falls closer to the folk and pop sides of the indie-[whatever] hyphen than rock. It’s a mellow but stylistically diverse and complex suite of songs that finds a more contemplative Baribeau. That’s not to say he’s suddenly all mopey and serious. With his soft, high croon, Baribeau retains his winsome, boyish charm even in more downcast turns. But there’s an edge here that contrasts Villanelles’ typical playfulness and suggests a newfound depth from one of the area’s bright young talents.

The Greatest Lyric by Doctor Sailor is available as a name-your-price download at doctorsailor.bandcamp.com.