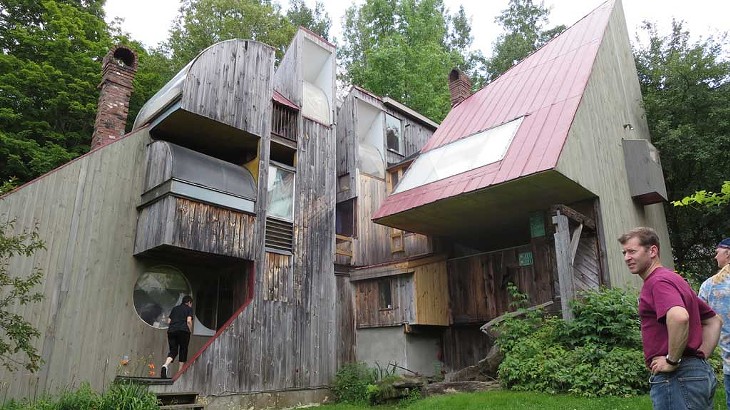 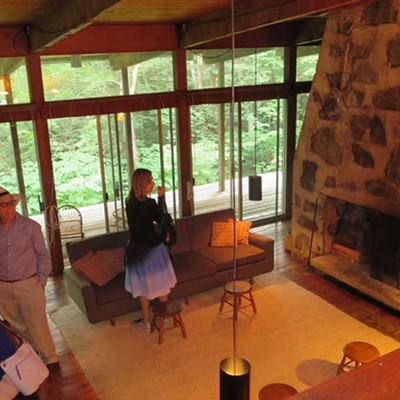 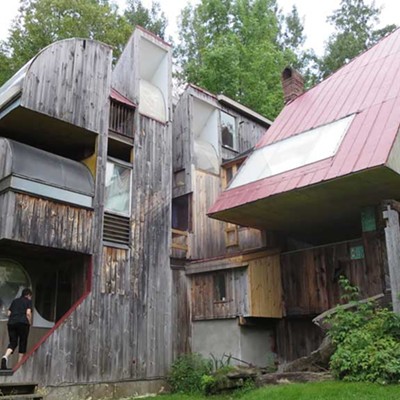 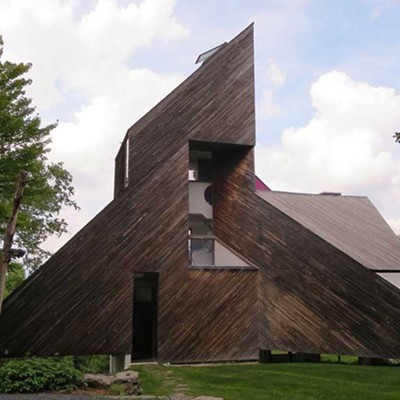 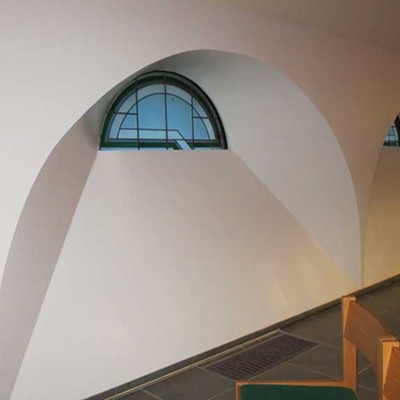 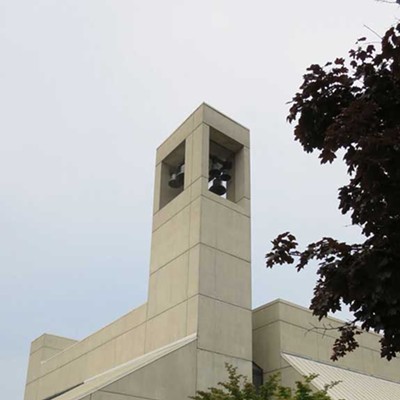 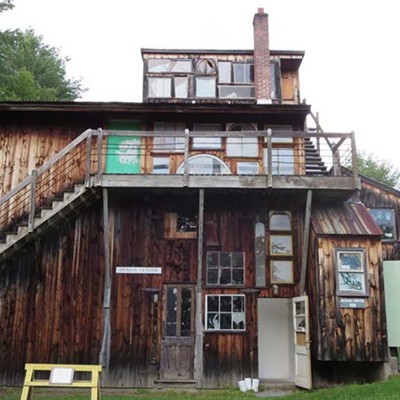 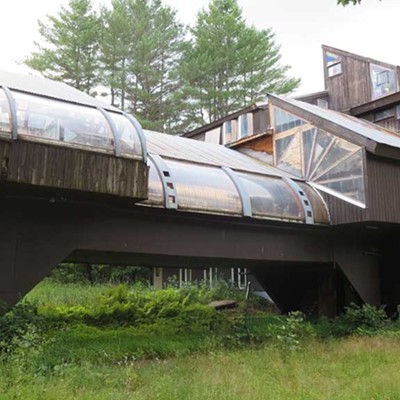 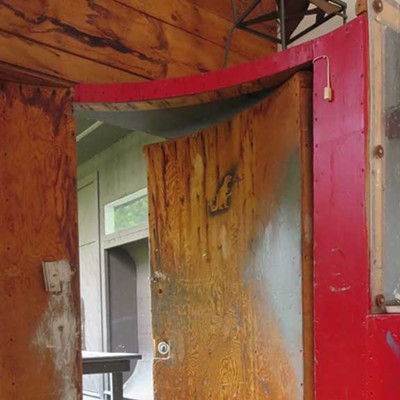 This past weekend, a group of avid modern architecture fans gathered in Vermont for an unprecedented event: a tour of the state's signature modern buildings. Enthusiasts of an era that lasted, at least in Vermont, from the 1940s through the '70s, these are folks who refer casually to iconic architects "Lou Kahn" and "Ed Barnes" as if they were old friends. (That's Louis Kahn and Edward Larrabee Barnes to the rest of us.) They talk about bay spans and volumes of space and Le Corbusier's influence. So what were they doing in architecturally vernacular Vermont?

It turns out there's plenty to see here — and Marie Sorensen, the programming coordinator for the Boston-based group that sponsored the event, Docomomo New England, was determined to fit in as much as possible.

In two 10-hour days, the group of 15 to 32 visited Frank Lloyd Wright protégé Allan Gelbin's houses in Norwich; Peter Eisenman's House II in Hardwick; David Sellers, John Mallery and students' Goddard College buildings in Plainfield; two churches and three houses, including one by the late Dan Kiley, in Burlington; more Sellers creations in Warren; and two Eliot Noyes ski houses in Killington. This itinerary required driving the width and breadth of the state and through its mountainous middle.

The New England chapter of the international organization Docomomo (which stands for "documentation and conservation of the modern movement") holds most of its tours and events in the Boston area, though it did make a recent trip to Maine. Its first foray into Vermont attracted a small Boston crowd that included architect Fred Noyes, who served as guide at the 1960 and '62 Killington houses designed by his father, Eliot. The later one was built as the family ski house while Fred was in high school, and he continues to use it.

Also, Scotford admitted, the opportunity to wander through Eisenman's white sculpture of a house, designed in 1969, was hard to pass up. "It's not every day you get into a Peter Eisenman house," she commented during a picnic lunch behind the Newbury Village Store. Two Bostonians made the drive up to isolated Hardwick solely to see Eisenman's House II.

A 3-D grid-oriented puzzle of mathematically determined masses and voids, House II might be seen as an extreme result of the modern movement. The international phenomenon, with origins in Germany's experimental Bauhaus of the 1920s and '30s, is often characterized as architecture shorn of historical referents to express a kind of pure beauty through function and form.

Eisenman's method was so pure he insisted on rectangular floor cutouts on the second level wide enough for an adult to fall through to the first floor. (The first owners, who had a toddler, inserted metal grates against the architect's wishes.)

Peering down through a grate, Colman joked, "Don't question the theory. The theory said there had to be a void here."

"He's very rigorous to the diagram," commented Noyes about Eisenman, who at 81 still teaches architectural theory at Yale. "The idea is more important to him than the livability." In the end, though, Noyes was surprised by the built version of Eisenman's notoriously complicated plans. "I like it better than I thought I would," he admitted.

(Perhaps someone will like House II well enough to buy it; its current owners, who lovingly restored it to its original state in 2002, put it on the market a few years ago for $2.8 million and recently reduced the price to $1.3 million.)

But if House II was one extreme, it seemed like every stop on the tour explored another. The trip covered such a wide range of architecture that modernism felt more like a collection of eclectic approaches than a movement.

Gelbin's houses, with their rooms' projecting dividers between wall and ceiling — a kind of continuous overhead shelf banding each room and hiding lights — are a direct link to Wright's designs emphasizing the horizontal line.

Meanwhile, the lines of Sellers' creations are, as he put it, intentionally "wacky" — a word not many architects lay claim to with such delight. "A home should take at least a year to reveal itself. There should be mystery to it," declared the cofounder of the 1960s design/build movement. During that era, Sellers and his fellow disenchanted Yale architectural students set out for Vermont's Mad River Valley to become DIY builders.

The tour viewed two of Sellers' Prickly Mountain houses above Warren and their culmination, Archie Bunker. That's a 2002 no-holds-barred, poured-concrete house with a pool that one has to experience to believe. (You can; it's available to rent for up to eight people at $700 per night on vrbo.com.) The Bunker and its '60s ancestors surprise with another staircase, improbable cubby or quirky detail at each turn. Doors come in every shape but rectangular.

At Goddard, Sellers' painting studio was so personalized that students nicknamed each plywood truss holding up the floors, according to Tunbridge designer Thornton Hayslett, who researched the buildings for a Norwich University class.

"Is it architecture, or is it art?" Sorensen, the principal of Sorensen Partners in Boston, wondered aloud about the three Goddard buildings. They are eligible for listing on the National Register of Historic Places but have been mothballed for 12 years following the college's switch to low-residency education. Filled with abandoned student art, they show the strain of deferred maintenance.

Colman opined of the buildings, "They're in this weird gray area of experimentation, art, design, architecture and concepts of living spaces." Worth saving? Of course. "Think how many boring buildings there are in the world," he pointed out.

By comparison with Sellers' creations (excepting the elegant, high-end Pitcher Inn in Warren), the buildings of "high" modernism on the tour seemed downright sober. These included a 1965 house by the still-practicing native Vermont architect Marcel Beaudin, now 85, who attended lectures by Eliot Noyes at Pratt Institute; a 1956 one by Dan Kiley, designed before he made his name as the 20th century's preeminent landscape architect; another designed in 1941 by Ruth and Bill Freeman, two principals in the Burlington firm Freeman French Freeman at a time when women architects were extremely rare; and the two Noyes houses.

There is, indeed, zero mystery to the uninterrupted sweep of the Noyes family ski home's shed-roof beams through the wall of sliding glass doors to the cantilevered deck outside.

"You can read the whole thing," Fred Noyes noted, seated on his family's original Knoll couches after having graciously served tour-goers tea, cheese and crackers. His father ran the department of industrial design for the Museum of Modern Art in New York City and designed the corporate look of IBM, among other innovations.

Not all the elder Noyes' projects were successful in his son's eyes. The other Noyes house, called the Ohly House, has a wall of plate-glass windows oriented toward the mountain view, while its shed roof, pitched toward an adjacent wall, draws the eye in a competing direction. "It's a little disorienting for me," Noyes commented.

Returning to his car after the tour, Don Kreis also felt slightly overwhelmed. "This is a bit like drinking from a fire hose, at the end of these two days," he quipped. "And we haven't even seen everything," he added, citing Bennington College's modernist structures and the Edward Durell Stone-designed campus of Landmark College in Putney, among other places the group could have visited.

Who knew Vermont was a trove of modern architecture?