Do You Canoe? Notes From a Paddlers Gathering 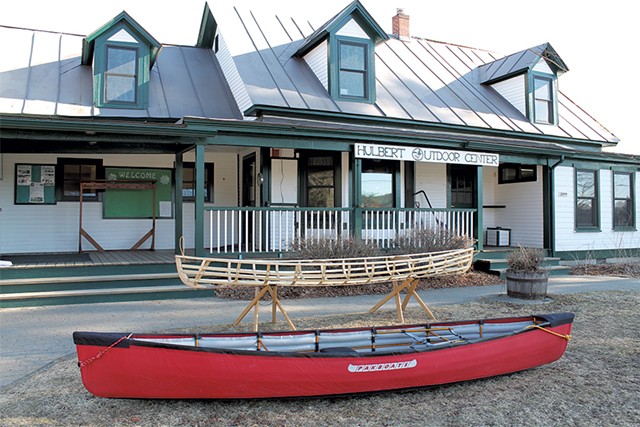 All were among the presenters at the 24th annual Wilderness Paddlers Gathering earlier this month at the century-old Hulbert Outdoor Center in Fairlee. The weekend rendezvous of wilderness canoeing aficionados is organized by the Northern Wilderness Travelers Conferences, an umbrella organization staffed by volunteers. The event gives backcountry adventurers a chance to socialize and swap stories, as well as to share information about maps, trip routes, equipment and skills.

Bonus learning came courtesy of 11 presentations that ran the gamut from stories of wilderness survival to memoir writing.

Usually the Paddlers Gathering's educational opportunities skew toward outdoorsy skills and slide shows of remote river trips. This year also brought a notable literary session (admittedly, the one that attracted this writer). The New Yorker's McGrath talked about his riveting December 2015 feature "The Wayfarer: A solitary canoeist meets his fate." It's about a man named Dick Conant who originated a small-craft adventure in Lake Champlain and went missing hundreds of miles downstream, off North Carolina's coast; he is presumed dead.

Twenty people packed into a classroom for McGrath's Saturday afternoon workshop, titled "Listening to Your Internal Editor." The writer began with an admission that may have surprised his audience: He said he finds the writing process extremely difficult and even finds it strange to offer advice to others.

McGrath opened a duffel bag at his feet and took out marble-covered composition notebooks containing Conant's private, handwritten journals. Next, McGrath passed around two typed manuscripts that the solitary canoeist had assembled for publication as books, and he proceeded to describe the problem that confronts all writers: How does one engage a reader?

"Canoe trips and the writing process have similarities," McGrath said. Both have beginnings, middles and ends; they convey experience; they take someone on a journey. McGrath implied that his own expedition toward excellent prose is a fight against the headwinds of self-doubt. He has "negative word-count days," he admitted, when he starts with 800 words and ends up with 600.

Another challenge facing professional writers and adventure memoirists alike, McGrath said, is the challenge of steering the story. "Canoeists tend to ramble," he observed.

One workshop participant, who had recently canoed in Cuba and wanted to tell his stories, seconded the point. "I have a whole shelf of canoeing stories, but most of them are awful," he lamented.

What's the remedy for a meandering, ill-conceived piece? McGrath said he learned from his colleagues and mentors at the New Yorker to test a story aloud on a friend, spouse or coworker and observe which aspects of the narrative the listener finds riveting. He added, "If you can't explain what your story's about in an elevator ride...," your writing may be paddling upstream. Another tactic McGrath deploys when he's stymied is to open an email window and compose there, he said. This simulates his professed habit of dashing off "Victorian"-length missives to friends.

These and other techniques helped McGrath turn out a compelling 10,000-word article on Conant, a project he recounted in a second presentation delivered in the evening: "The Missing Boater: Reconstructing the Journeys of a Transcontinental Canoeist." Using digital slides and short video snippets, McGrath recalled how he met the intrepid, charming Conant and reported his last voyage. The article includes multiple excerpts from the journals of the oft-lyrical canoeist. McGrath's full-length book about Conant's life is forthcoming.

While McGrath's adventure stories were vicarious, other presenters at the Paddlers Gathering shared first-person accounts of their journeys, often made in wooden canoes they built themselves and launched in wild, sparsely populated locales such as Inner Mongolia, Denmark and northern Canada.

Leah Titcomb, 27, is a certified Maine guide and former education coordinator for the Appalachian Mountain Club. She said she grew up in a family whose wilderness credo is "Go light, go cheap and, most importantly, go now." Titcomb began her digital slide show by recounting a tantalizing invitation she received in early spring 2015 from a fellow paddler to join a three-week canoe trip on the remote George River in northern Québec. She wanted to go but had used up her vacation days.

The audience hooted its approval as Titcomb told them how she resolved her quandary: She quit her job. By mid-July, she was seated in the stern of a 17-foot canoe stroking the north-flowing waters of the George. She proceeded to tell her fellow paddling enthusiasts about the 400-mile trip to Kangiqsualujjuaq, an Inuit village on Ungava Bay.

Other highlights of the Paddlers Gathering included Vermont Public Radio storyteller Willem Lange, who recollected a canoe trip he took with his family 44 years ago on rivers through New Hampshire and Maine. Dartmouth ethnobotany doctoral candidate Simone Whitecloud shared her research on some of the 500 plant species in Greenland, as well as her hopes to create a trilingual website in English, Inuit and Danish covering the plants' edible, medicinal and cultural properties.

Vergennes-based musician Peter Macfarlane recounted his rain-sodden solo odyssey along the 740-mile through-paddle of the Northern Forest Canoe Trail in a craft he designed and built. He also offered a workshop on planning for a trip on that route, which winds its way through Vermont and neighboring regions. Some of Macfarlane's tips: Forgo cumbersome kitchenware and instead make one-pot meals and serve them on the lid; bring a ski pole to help you wade through the shallows; and pick up a DeLorme satellite communicator with a two-way text-messaging account to supplement spotty cellphone service along the trail.

The Wilderness Paddlers Gathering is modeled after the 31-year-old Toronto Wilderness & Canoe Symposium, an event that now attracts upwards of 400 attendees annually. Back in the early 1990s, a contingent of Vermont canoeists decided to inaugurate a similar event closer to home after driving through a blizzard to reach the Toronto symposium. Those founders included Andy and Deb Williams, then directors of the Hulbert Outdoor Center. Bruce Lindwall, an educator from New Hampshire, remembered when the Paddlers Gathering was just a potluck and slide show, in contrast with today's fully catered and programmed gathering.

Is there irony in spending a weekend with a crowd inside a heated building, celebrating trips spent outdoors and far from civilization? Lange noted one parallel between the two: When sitting for prolonged periods, whether paddling or attending workshops, it helps to have a "cast-iron ass." But another participant said pointedly, "The elephant in the room is that the people here have an intense relationship to wilderness."

Some of them have deep connections to one another, too. Mike Gaulin of Sturbridge, Mass., said the Paddlers Gathering is a reunion of his tribe. "When I get off the interstate, my heart starts beating faster," he said, "and by the time I pull in the [Hulbert] driveway, it's like I'm home."

The sixtysomething Gaulin began canoeing 30 years ago with an 84-pound fiberglass canoe from Sears. He likened it to "floating in a bathtub full of concrete." The handyman now builds and repairs wooden and canvas canoes. Gaulin explained the difference between the boats he makes and the one he purchased: "In a wooden boat, you play chess with the rapids; in a plastic boat, you play football."

Participant Michael Ranniar, who grew up in the Bronx, said he first found his way to nature by taking the subway, and then a bus, to try skiing on upstate New York's Bear Mountain. He summarized the Paddlers Gathering "tribe" like this: "The kind of people who are here are those who would rather do it the hard way, if it's the best way, than the quick way if it's the wrong way."

Some of those hard-way attendees eschewed heated cabins and spent the weekend camped in canvas tents behind the center's cafeteria.

By the Paddlers Gathering's final morning, Sunday, the trend of casual conversations had shifted from "Where have you been?" to "Where are you going?" One woman was overheard saying to Leah Titcomb, "You inspired me, and now I am planning a trip on the George. Where did you get your maps?" Dave Brown of Craftsbury Common shared details from an expedition that he and his wife will take this summer along a series of remote rivers in Québec to reach Ungava Bay.

At another table, 23-year-old Dan Johnson presented his plan to canoe from Willimantic, Maine, down the Willimantic River to Willimantic, Conn., retracing the historic route that Maine-manufactured spools once took to the Connecticut thread factory. He's got a lot of details to work out, he said, but "it gets you excited for spring."