Do the Math: College Tuition Is Rising Faster Than Inflation 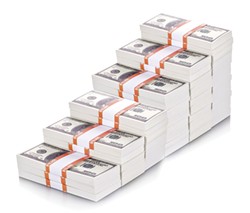 Alex Reid, a 17-year-old from California, sat on the front porch of a dormitory at Champlain College, where she just started her freshman year. She typed on her laptop, swayed to music emanating from a portable speaker, and chatted with other students in shorts and T-shirts, happily soaking up their first tastes of college life.

These good vibrations don't come cheap: Champlain tuition, room and board cost $51,486 this year. Reid's payment plan is straightforward. "For me it was loans, lots of loans," she said.

The annual cost to attend Vermont's priciest residential colleges has surpassed $60,000. That's more than twice what the average Vermonter earns in a year.

The state's three most expensive schools for combined tuition, room and board are all private institutions: Landmark College ($61,910), Bennington College ($61,790) and Middlebury College ($61,046.)

"We have more than 200 faculty and staff for just under 500 students," Landmark president Peter Eden said in an email. "Our classroom ratio of students to instructor is very low, allowing for individualized attention. We do not have a huge endowment that can support our operating budget, so revenue to run the model comes from tuition and fees."

Deal-hunters who can live at home and avoid shelling out for room and board get the best price on higher education at the Community College of Vermont, which has campuses in Winooski and at 11 other locations around the state. CCV tuition for a full course load runs $5,905 for an in-state student.

Private Goddard College in Plainfield, alma mater of playwright David Mamet, is also championing a low-residency model. Students come to campus for about eight days each semester and return home to do most of their work. The format allows for savings on room and board. Tuition this year for a bachelor-of-arts student runs about $15,500.

Whether they attend the priciest schools, the least expensive or something in between, many students say they piece the financing together with grants, loans, and the Bank of Mom and Dad.

Lauren Tocci, a University of Vermont junior from Massachusetts, has taken out loans, and received scholarship support. But her parents are paying a big chunk. "If I didn't have my parents, then I would never, ever have been able to attend a university like this," Tocci said.

This year UVM tuition, room and board come to $48,236 for out-of-staters such as Tocci. As she walked up Maple Street in sunglasses, sandals and a swinging sundress, Tocci looked the part of carefree college student. But college comes with worries about money, she said, and the cost is setting her generation up for struggle and debt: "It's not conducive to supporting the lives of young people."

UVM officials concede the price is steep for non-Vermonters. "It is a stretch for a family from out of state who's low-income or middle-income to come to the University of Vermont," said Stacey Kostell, UVM's vice president of enrollment management. But the out-of-state rates make the university affordable for Vermonters of all socioeconomic levels, and that is the institution's focus, Kostell said.

Vermonters pay $25,844 to go to UVM. Last year 34 percent of in-state students paid no tuition at all as a result of financial aid. That number jumps to 46 percent when it includes students who attend tuition-free because a parent works at the university.

But the bills don't necessarily stop at tuition, room and board.

Many schools add mandatory fees for technology, orientation and other costs. At Sterling College, in Craftsbury Common, students pay an extra $1,750 each semester, which includes a "global field studies fee." This helps ensure that all students can afford to study abroad, regardless of need, according to college spokesperson Christian Feuerstein.

Officials at Norwich University in Northfield, the nation's oldest private military academy, estimate that new students need to budget about $2,000 for uniforms on top of $46,608 this year for tuition, room and board.

Prices at most schools have climbed faster than many consumer products. Champlain College's tab is nearly double the $26,450 that the school charged in 2006-2007. The hike over time was a deliberate strategy to help the college build new dorms, classrooms and dining halls. In addition, Champlain established study-abroad programs and accelerated its transition from a junior college to a four-year school.

The price increase has delivered a counterintuitive result, according to David Provost, Champlain's senior vice president of institutional advancement and finance: It has made Champlain more affordable.

Because the school is charging more, Provost reasoned, it can set aside money from those who can pay the tuition to assist those who cannot — as UVM and its other competitors already do.

Today, about a quarter of Champlain's students are eligible for federal Pell Grants — up from 5 percent 10 years ago. That shows the school is enrolling more low-income students, Provost said.

Champlain's annual financial-aid budget has grown from $1.4 million to about $30 million over the past decade, Provost said. About 95 percent of Champlain students receive some form of assistance.

Student enrollment — not counting full-time online students — has grown from about 1,700 in 2005 to 2,200 today, and there is no indication that price increases have scared them away, Provost said. They come from 37 states and abroad for career-focused programs such as game design, creative media and marketing. Champlain was recently named No. 1 in the North in U.S. News & World Report's Most Innovative Schools category.

Reid, the Champlain student from California, "picked this college because of the major" — in her case, computer forensics. She hopes that being able to analyze computer and internet activity for security purposes will lead to lucrative job offers.

She said she doesn't know exactly how much she'll owe when she graduates. The average debt load for Champlain students upon graduation is around $26,000, Provost said.

Many factors drive the price increases. Private schools rely heavily on donations, endowments and tuition-paying students who can help subsidize needy ones. If any of those revenue sources dwindle, it puts pressure on prices.

Levels of taxpayer support also influence public-school rates. The Vermont legislature allocated $42.5 million to UVM this year, up about 4 percent from the previous year. But the state appropriation to Vermont State Colleges — $24.4 million — has been flat for three years running. Vermont's support of higher education is minimal in comparison to many other states, and lobbying the legislature has done little to change that.

Meanwhile, schools feel pressure to offer new programs and amenities to attract applicants from the pool of college-age students, which is shrinking in the Northeast. Last spring UVM began construction on a $104 million science, technology, engineering and mathematics complex.

For a host of reasons including salaries, real estate, shifting endowments, new programming and varying levels of state support, college costs have been increasing faster than inflation, according to a study by the College Board, the private corporation that studies trends in higher education. For example, while the Consumer Price Index rose 2 percent between July 2013 and July 2014, the in-state price of public institutions rose 2.9 percent, and the cost of private institutions rose 3.7 percent.

College administrators like to emphasize the net price to students — after financial aid — rather than the sticker price. For example, at Middlebury, the average net price in 2013-2014 was $20,903 for beginning undergraduates who received financial aid, according to the U.S. Department of Education.

UVM's website includes a net price calculator, so families can plug in their income and assets to get a rough estimate of what costs are likely to be after loans and grants.

Tuesday, UVM touted new federal data at collegescorecard.ed.gov that showed net costs for Vermont students who get federal aid was $14,876 — nearly $2,000 below the national average.

For many young people, however, the price is still too high. Michelle Richer of Winooski is starting coursework in phlebotomy at Community College of Vermont this semester. But many of her friends are opting out of higher ed "because there's no way they could even begin to afford to go to college, even with grants and scholarships," she said.

Sitting in the CCV courtyard on a hot afternoon as heavy traffic whizzed by on Route 15, Richer said she hopes to obtain a certificate within a year. She figures after grants it will cost her around $1,000. While that's reasonable compared to many college bills, Richer also has a $10,000 student loan to pay off from one year at Bay Path University in Longmeadow, Mass. She works part-time as a sales associate at the Bon-Ton department store at the University Mall.

By her calculation, though, the investment is worth it. Richer is confident she will land a job after she completes her certificate.

"My thinking was, to get ahead in this world you really need a college degree of some sort, and I just can't sit around and try to make it with a high school degree," Richer said. "I was never going to get anywhere in life."