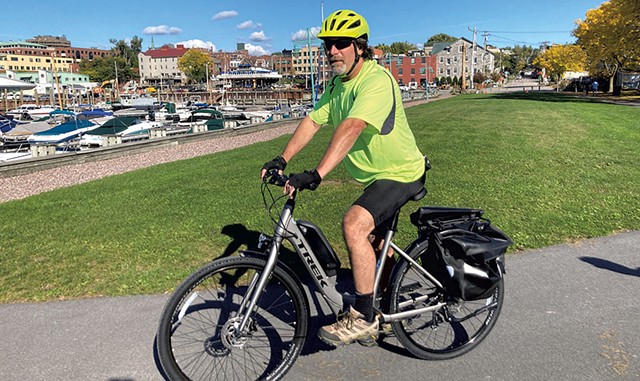 Bob and Kay Cato were cycling the Burlington Greenway bike path on a recent weekday when they stopped for a rest. The retired couple, visiting from Arlington, Va., had ridden about 25 miles — out to the Colchester Causeway and back — on their electric bicycles, which they purchased in May.

E-bikes, as they're commonly known, have quiet, low-speed motors that assist riders with pedaling or power the bike entirely. While some have throttles, the Catos' e-bikes require pedaling to engage the power-assist functions.

"I did grocery shopping with my bike," added Bob Cato, who's 79 and has already put 265 miles on his new wheels.

Indeed, e-bike advocates tout their ease of use, climate-friendly footprint, and ability to replace cars for short trips such as local errands and commutes to work or school. Because e-bikes expand both the distances and types of terrain cyclists can travel, they enable more people to get into cycling, especially those with physical limitations. And for people who cannot afford a car, an e-bike can be an economical alternative. Their prices, like those of conventional bikes, vary widely but most fall in the $1,500 to $5,000 range.

But as e-bikes become more common in Vermont, some have asked whether they pose a greater safety hazard than traditional bikes to the riders or others, especially in congested areas such as the Burlington waterfront.

There are no reliable statistics on how many Vermonters are riding e-bikes, but nationally, e-bike sales were already gaining momentum heading into the pandemic. The market research firm NPD Group reported in March that between 2019 and 2020, e-bike sales grew by 145 percent, outpacing the growth in conventional bike sales; they now comprise 10 percent of the U.S. cycling market. 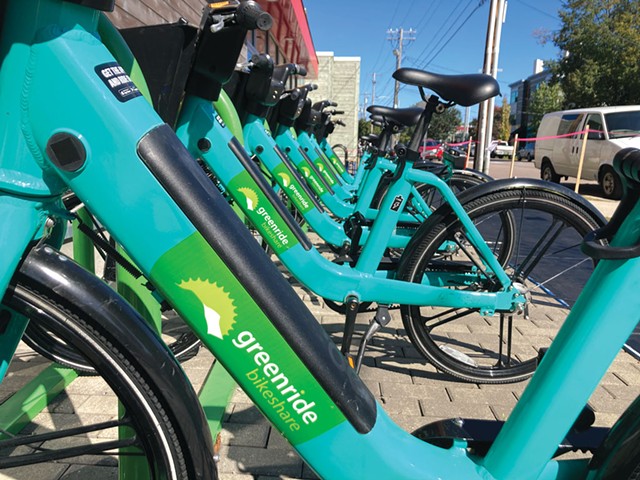 On May 1, Burlington's Department of Public Works began a one-year contract with Miami-based Bolt Mobility to provide e-bike rentals at 17 locations in Burlington, South Burlington and Winooski, including the University of Vermont, Champlain College and Burlington International Airport. According to DPW, Bolt has deployed about 120 e-bikes, with plans to expand its Chittenden County fleet to 200. The rentals cost $1 to unlock plus 35 cents per minute to ride, with an annual plan available for $100.

Local Motion, a Burlington-based nonprofit focused on getting people out of cars and into healthier and more sustainable modes of transportation, runs an e-bike lending library. People curious about them can check one out for free for up to a week.

The Burlington service has been so popular in the last three years that Local Motion set up similar operations in Middlebury, Rutland and Brattleboro. The group also has a mobile e-bike library that travels to smaller cities and towns.

"You can try them out and see if they change your life, which they do," said Karen Yacos, Local Motion's executive director. In fact, about one in four people who checked one out later reported buying one, she added.

So how safe are they? While there's "a lot of opinion and conjecture" about the hazards of e-bikes, Yacos said, there's no evidence that they pose a greater risk than traditional two-wheelers.

"You see these thing go by, and you don't know what they are. Do they go faster than regular cyclists? No, because they're incapable of that," Yacos explained. "People get their fear hackles up, but ... a good cyclist on a good road bike can go pretty fast."

The Burlington Police Department has no e-bike crashes listed in its database since 2016. It has documented no conflicts between e-bike users and pedestrians, motorists or other cyclists. Of the 12 reported incidents involving e-bikes since 2019, virtually all were property-related crimes such as vandalism or theft, according to Deputy Chief Matthew Sullivan.

"Anecdotally, I'm often on the [Greenway] path as it is my commuting corridor, whether for work or play," Wight wrote in an email. "I find the vast majority of [e-bike] users respectful."

In larger cities, the growing popularity of electric vehicles, including scooters, mopeds and e-bikes, has raised safety concerns. The New York Times reported on October 11 that at least 17 people have been killed this year in New York City while riding e-mobility vehicles, and another three pedestrians were killed in e-mobility collisions.

With the rapid growth of e-bikes nationally, state legislatures, including Vermont's, have started to navigate where e-bikes fall in their vehicle and traffic laws; should they be considered motorized vehicles, like motorcycles, or nonmotorized ones, like conventional bikes?

In February, the National Conference of State Legislatures issued an e-bike primer that examined e-bike safety and efforts to regulate their use. According to that report, the research comparing e-bike speeds to those of traditional bicycles is "mixed and inconclusive."

One study, from Sweden, found that e-bikes travel 5 miles per hour faster, on average, than conventional bikes. Another study, however, conducted at the University of Tennessee, Knoxville, found little difference between the two. As the latter concluded, "With few exceptions, riders of e-bikes behave very similarly to riders of bicycles."

On May 20, Gov. Phil Scott signed into law Act 40, which defines e-bikes as nonmotorized vehicles that can go virtually anywhere traditional bikes can. The law established three classes of e-bikes based on speed and power-assist options. Class one and two e-bikes cease to provide assistance once the e-bike reaches 20 miles per hour; a class three e-bike, at 28 miles per hour.

As the regulations arise, Local Motion's Yacos pointed out that the primary determinant of someone's behavior on the bike path "is not the e-bike, the skateboard or the e-Onewheel, whatever. It's the person riding it."