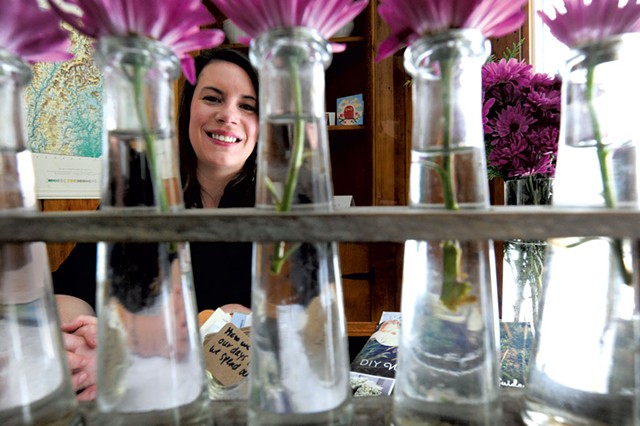 From Martin Short's Franck Eggelhoffer in Father of the Bride to Nathan Lane's Pepper Saltzman on "Modern Family," the wedding-coordinator shtick is about as old as love itself. A highfalutin so-and-so swoops in on the bride and groom to take charge of everything from rose petals to rosé, to comic effect.

But when Caitlin Frauton was planning her own wedding, she laughed at the idea of spending a fortune. Her budget was just $18,000 to entertain 165 guests for an entire weekend. Instead of finding inspiration in a feature film or sitcom, she turned to the DIY Network for her light-bulb moment.

"In 2012, when we started talking about getting married, the traditional weddings that we'd gone to in the 1980s just didn't resonate with us," says Frauton, who met her groom, Rick, on Match.com. "Still, we were trying to have the nicest wedding we could at the best cost."

With some event-planning and fundraising experience under her belt, Frauton decided to coordinate her own nuptials, which were staged at the Joslin Diabetes Center's summer camp in central Massachusetts. As she explains on her website, "I quickly found navigating the wedding industry was a lot more confusing and time-consuming than I realized. As a result, there were lots of 'oops' and 'wish we had known that' moments along the way."

Example No. 1: ordering double the number of invitations she needed, not realizing that each household needed just one, not two. Then, two weeks before the big day, Frauton discovered that her catering staff couldn't make the date. With a little elbow grease, however, and a lot of craft brew alongside a buffet of barbecue, she was able to get hitched in September 2013 without a hitch.

After that experience, "I decided I wanted to help other couples have amazing weddings," she writes, "minus all the stress."

Without a pre-existing business model to follow, Frauton started from the idea of "coaching" couples on staging their own weddings. "But I knew that in order to be an effective coach, my own wedding wasn't enough," she says. "So I started coordinating other weddings."

Frauton launched her website — diyweddingmentor.com — in January 2014. In her first three years she has racked up professional experience by coordinating some 30 weddings. Frauton works out of her home in Waterbury, where a desk in the corner of her living room serves as Grand Central Station for weddings of all kinds.

How do her services differ from those of traditional wedding coordinators? Much of it comes down to the digital dynamic. Instead of simply meeting with couples at some point during their wedding planning, Frauton aims to be there from the moment they get engaged. She arms them with a Wedding Day Kit download that includes a detailed wedding checklist (see "I Do To-Do's") and other pointers for pulling off the perfect day.

Frauton does most of her work on Google Hangouts, offering two packages. The first includes three consultations before the wedding, for $1,875; the second, at $2,175, includes five consultations and an in-person visit to the venue.

"I've come up with a system in this wedding day plan so that you don't need to reinvent the wheel for your own wedding," she says. "This way, you're not trying to figure things out on your own, doing a Google search at three o'clock in the morning."

Virtual vow planning turns real on the actual wedding day, when Frauton will travel to the venue to do everything from directing the cocktail hour to picking up dropped forks. Among the Vermont locations of upcoming nuptials she's shepherded are All Souls Interfaith Gathering and a private residence, both in Shelburne.

Frauton gets a payoff beyond the paycheck, she says: seeing creative new twists on tying the knot in each consultation. For example, there was the couple that chose to have no chairs at their wedding; instead, guests followed a fiddle player in a processional. "Thinking about it, I get the chills," Frauton says. "Everybody being together and surrounding this couple with love and support."

That experience helped inspire a spin-off of her website: feeltheweddingdaylove.com, an online wedding-planning program with lower rates than the other consulting services. It will run for four weeks starting February 13; couples can sign up through February 12.

"This is the first year I feel really great about having something that's a huge help to couples I can't be there with," says Frauton. "I believe that the idea of mentoring and guiding really resonates with a lot of couples in Vermont."

I Do To-Do's (From Frauton's Wedding Day Kit)

When you first get engaged and shortly thereafter

Six to eight months out

Four to five months out

Two to three months out

Four to six weeks out

Two to three weeks out

One week out to a few days before the wedding

Day before the wedding