Diving Into History at the Lake Champlain Maritime Museum 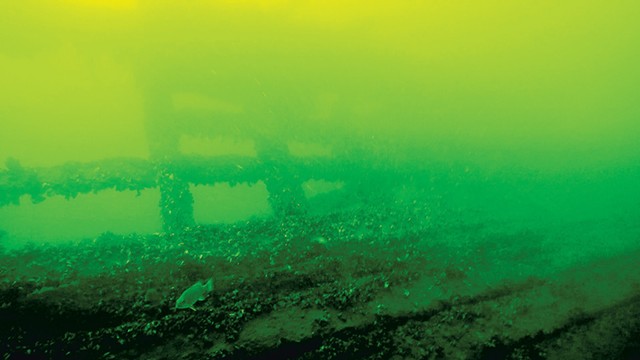 As summer approaches, Vermonters invariably turn their eyes toward the sparkling waters of Lake Champlain. While most people engage in aquatic recreation on or near the water's surface, the waves hide a long and rich history, much of which still resides on the lake's bottom.

At 120 miles long, up to 12 miles across and 400 feet at its deepest, Lake Champlain is home to more than 300 shipwrecks dating back to the mid-1700s. Some are just a stone's throw from shore, and previously unknown submerged vessels and related artifacts are being discovered all the time. Nowhere are these unique archaeological treasures easier to access than at the Lake Champlain Maritime Museum, founded 32 years ago as a way to showcase the lake's underwater resources.

"The only way you get a crazy collection of shipwrecks like the one we have is by having an amazing history," says museum codirector Erick Tichonuk.

Actually, the word "museum" doesn't do justice to this hidden gem in Vergennes. The nonprofit has begun calling itself the Lake Champlain Maritime Museum & Research Institute, explains codirector Joyce Cameron, as a more accurate reflection of its mission to preserve, maintain and teach the public about the lake's history and cultural importance.

To that end, the LCMM has a contract with the State of Vermont to maintain and oversee the lake's many underwater cultural resources. It's been instrumental in creating the rules and guidelines that govern how recreational divers can access the historic wrecks, with the goal of protecting them from anchor damage and archaeological plunder.

There's no need to don a wetsuit and scuba tank to get an up-close look at these shipwrecks and other historic vessels. The museum displays dozens of watercraft, both originals and replicas, as well as high-tech means for accessing the ones that remain deep below the surface.

The museum sprawls across the outskirts of Vergennes, just across the road from the Basin Harbor Club. More than a dozen buildings scattered across its grounds contain fascinating nautical-themed installations worth hours of exploration.

Most pay tribute to the different modes of travel that have been used on Lake Champlain for centuries. They range from traditional Abenaki canoes to horse-powered ferries to 19th-century steamboats and canal boats — the last of which, says Tichonuk, were once as common on Lake Champlain as tractor trailers are on today's highways.

The museum's Hazelett Watercraft Center holds two floors of original vessels such as dugout and bark canoes, rowing skiffs, kayaks, and sailboats, some of which date back hundreds of years. The centerpiece of the exhibit is a fully rigged, 35-foot ice yacht dubbed the Storm King. Built in 1902, it was the fastest mode of human transportation in its day, capable of traveling 120 miles per hour.

Another exhibit, "The Key to Liberty: The Revolutionary War in the Champlain Valley," is a must-see for visitors with an interest in the American Revolution and the decisive naval battles that were fought on Lake Champlain. This permanent display features eyewitness accounts of the 1776 Battle of Valcour Island and a nine-foot scale model of the gunboat Philadelphia, which was sunk by the British Royal Navy. In 1935, it was raised and transported to the Smithsonian's National Museum of American History in Washington, D.C.

"The Key to Liberty" exhibit reflects the kind of research that happens at the museum all year round. On-site archaeologists and researchers continually discover new items to add to the museum's collection of more than 12,000 artifacts.

"The Key to Liberty" exhibit revolves around the moment when a cannon exploded aboard the gunboat New York in 1776. Eloise Beil, director of collections and manager of community relations, explains that, thanks to years of detailed underwater archaeological surveys, the museum has recovered most of the fragments of the cannon in question, along with other artifacts of the incident. Researchers have identified the lieutenant from Massachusetts who was killed in the explosion, located his grave and reproduced his headstone. It's an example, Beil says, of how shipwreck exhibits like "Liberty" continue to evolve and assemble pieces of the vast historical puzzle.

The LCMM differs from most museums in that its archaeology conservation lab is open to the public. Visitors are invited to walk in, watch the staff at work, and ask questions about how they restore and preserve newly discovered artifacts — and occasionally re-create the past.

Two prominent wreck exhibits at the museum, the General Butler and O.J. Walker, inspired the 2002 construction of a replica schooner, the Lois McClure. Originally intended as a permanently moored exhibit on Burlington's waterfront, the Lois McClure proved to be such a successful outreach tool that it now takes regular excursions as far as Long Island, N.Y., and Québec City, says Chris Sabick, the museum's archaeological and conservation director. This Fourth of July weekend, the schooner will begin a two-month water journey to Buffalo, N.Y., to mark the bicentennial of the start of the Erie Canal's construction.

One of the more unusual wreck displays in the museum's Nautical Archaeology Center is a half-scale replica of a fragile shipwreck that still sits on the bottom of Burlington Bay. It's a 63-foot-long horse-powered ferryboat, one of many that operated on Lake Champlain from the early to mid-19th century, when they were replaced by faster and more efficient steamboats.

In fact, when this wreck was discovered, in 1983, Tichonuk says, archaeologists initially assumed it was a steamboat but were puzzled by the absence of metal machinery. Only later did they discover a turntable beneath the deck, similar to a treadmill, on which the horses walked to power the ferry.

"It's a fascinating piece of history that, frankly, had been forgotten about," Tichonuk says. "This is the only known archaeological example of this [kind of] boat."

Why do old shipwrecks stay so well preserved in Lake Champlain? As Sabick explains, freshwater lacks the organisms that normally consume the wood of ocean shipwrecks. The mud and silt on the bottom of the lake may even act as preservatives, keeping centuries-old wrecks in remarkably good condition.

"We have wrecks from a long window of time that represent various phases of the lake's history," Sabick says, "which is just amazing."

While raising wrecks from the water's depths is one way to share that rich underwater history with people who don't scuba dive, it's also a time-consuming and costly process. Over the years, one of the museum's bigger challenges has been finding alternatives.

One solution is an underwater ROV, or remotely operated vehicle. About twice a month, the LCMM, in conjunction with the Basin Harbor Club, offers one-hour excursions on a 50-passenger vessel called the Escape. Visitors climb aboard and explore still-submerged wrecks along the lake bottom via a live video feed from the ROV. Says Cameron, "You see it really clearly on a big screen, all with a cocktail in hand."

The museum staff has also used sonar to create three-dimensional images of shipwrecks in the form of point clouds that the public can examine and manipulate on tablets. Using a process called photogrammetry — the computerized stitching together of thousands of separate digital images of shipwrecks shot from different angles — they've crafted entire 3D models of wrecks that are useful for both research and educational outreach.

While history may be one focus, also central to the museum's mission is keeping nautical skills alive through workshops, classes and opportunities to get out on the water in traditional boats. Throughout the summer and fall, museum visitors can choose from an à la carte menu of classes that range from lunch cruises and rowing opportunities to daily demonstrations and instruction in traditional glassblowing. The technique was long used for making navigational lights, lighthouse lenses, deck lights and prisms for watercraft of all kinds.

Dedicated to nautical crafts as well as skills, the LCMM is also home to one of New England's largest blacksmith shops. About 10 years ago, while working on a replica of the gunship Philadelphia, the museum built an 18th-century-style forge. That exhibit proved so popular that, in 2008, a new forge was opened on-site for teaching blacksmithing, metalworking and bronze casting.

Visitors who want the above-the-water view can check out one of the museum's fleet of 18 rowing gigs, which are available daily for hourlong, self-guided trips on the lake, weather permitting.

Sound like too much to experience in just one day? Tichonuk remembers walking the museum grounds last summer and asking a visitor what he thought of the place.

"He said, 'I'm pissed!' So I asked him what's wrong," Tichonuk recalls. "He said, 'I read somewhere that I should allow two hours at the museum — and I've spent two hours in just the first two buildings!'"

Not a problem, Tichonuk reassured his guest. A day pass is good for a return visit the following day.