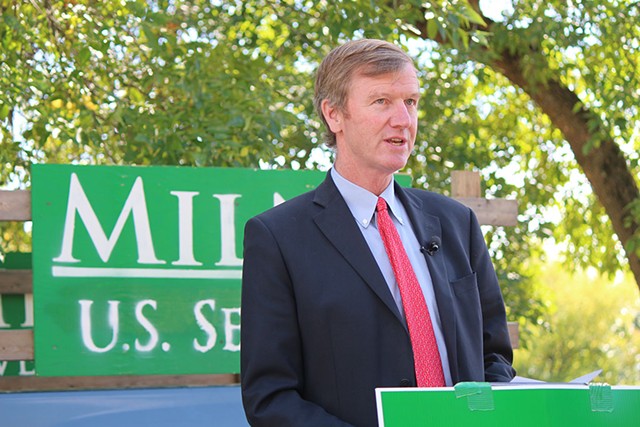 Last April, Republican Senate candidate Scott Milne slammed his party's future presidential nominee, Donald Trump, for "cozying up to the [Ku Klux] Klan." But, he added, "I'm not ruling him out."

In June, Milne called Trump's denigration of a federal judge whose parents were born in Mexico "distressing." But, the Senate candidate said, "I'm still listening."

In July, Milne said it was "a poor decision" for Trump to post anti-Semitic imagery on Twitter. But, he added, "I would be delighted if I was in a place where I was supporting Donald Trump by November."

In August, Milne called Trump's Islamophobic attacks on Khizr and Ghazala Khan — the parents of a slain Army captain — "silly." But, Milne said, he was "still hopeful" he could find a way to support his party's nominee.

On Saturday afternoon, Milne called a newly released videotape of Trump bragging about sexual assault "disgusting," "offensive" and "pretty disturbing." But, he said of the 2005 Access Hollywood video, "It's not enough for me to change what I told you, which is, 'I'll tell you who I'm voting for when we get closer.'"

Then, something mysterious happened. After months of excusing the inexcusable, Milne finally grew a backbone — or a conscience. Or maybe he just made an overdue political calculation.

Within 20 minutes of arguing that Trump's "grab them by the pussy" remarks were "not enough" to disqualify him from the presidency, Milne called back to say that they were.

Milne, who is challenging Sen. Patrick Leahy (D-Vt.) in next month's election, was hardly alone in his deathbed conversion. Throughout the country last weekend, GOP politicians pulled their endorsements like rats fleeing a sinking orange ship. Even in Vermont, where many top Republicans had long since abandoned Trump, a few remaining rodents scurried ashore.

"At this time, I am withdrawing my support for Mr. Trump," House Minority Leader Don Turner (R-Milton) said in a statement Saturday night, calling the nominee's words "indefensible, offensive and inexcusable."

They were also politically problematic for Turner's House Republican caucus, which he had been hoping to expand beyond its near-super-minority status in November's election.

"I'm very concerned about it," Turner said Monday. "I've spent six years of my life trying to get more Republicans in the legislature, and I could see that all go away because of a presidential candidate we had no say about."

Well, technically, they did have some say in the matter. In last March's presidential primary, Vermont Republicans gave Trump a plurality of their votes. And at July's Republican National Convention, all but three Vermont delegates cast ballots for the eventual nominee.

"I'm just hopeful that Vermonters will decide who they want to be the next president but they won't hold it against anyone down the ballot," Turner said.

To be sure, Scott dodged a bullet by denouncing Trump 13 months ago and consistently confirming that he would never vote for the man. That's kept Democrats from tagging Scott as a Trump toady, the way they have GOP gubernatorial nominee Chris Sununu in New Hampshire. And it's kept them from calling out his every awkward bob and weave, the way they have Sen. Kelly Ayotte (R-N.H.) in the Granite State.

"Every day that goes by and the more I hear off the campaign trail from Donald Trump just reaffirms my decision," Scott says. "I feel good about the decision I made."

But the lieutenant governor says that he, too, is "concerned" that Trump's self-immolation could cost Scott the race. Republicans tend to do worse in Vermont during presidential election years because otherwise flaky Democratic voters suddenly turn out in droves. That trend could be exacerbated in November if Trump's presence on the ticket further juices Democratic turnout.

"You're a guy. So am I. We've probably all said similar things. There just wasn't a camera on at the time." Addison County Republican Party chair Jon Christiano tweet this

Jake Perkinson, a former chair of the Vermont Democratic Party, says he thinks most Vermont Republicans "have positioned themselves fairly well" in opposition to Trump. But even though some Bernie Sanders-loving Democrats aren't keen on backing presidential nominee Hillary Clinton, Perkinson argues, "I think that's going to be countered by an even more depressed turnout among Republicans because of Trump."

David Sunderland, who chairs the Vermont Republican Party, disagrees with that theory. He argues that "the prospect of a Hillary Clinton presidency" will do more than enough to motivate his party stalwarts.

"He's the only alternative to a Hillary Clinton presidency, which is unfathomable," Sunderland says of Trump.

The party chair is in an uncomfortable position. He calls the latest Trump bombshell "repulsive and disappointing and shocking." But even though the Vermont GOP has said for months that it'll focus exclusively on state elections this year, there's not much he can do to remove the taint of Trump.

Sunderland's job is made harder by party leaders who don't exactly stay on message. Over the weekend, Turner's minority whip, Rep. Brian Savage (R-Swanton), wrote on Facebook that he could no longer support Trump. But as Vermont Public Radio's Peter Hirschfeld reported, Savage later deleted the post and defended Trump's X-rated remarks.

"We've probably said similar things in our lifetime, you and I," the Swanton Republican told Hirschfeld with a chuckle. "It's just that the microphone probably wasn't on."

Other prominent Republicans also weighed in on Facebook. Deb Bucknam, the party's nominee for attorney general, said that while Trump's words were "gross," Clinton had "destroyed women's lives." She repeated accusations, raised by Trump at Sunday's presidential debate, that the Democratic nominee had intimidated women who had accused her husband of extramarital affairs.

"If Bill Clinton and his enabler wife, who set out to destroy Bill's accusers, are qualified to be President, then this conversation by Donald Trump certainly does not disqualify him," the St. Johnsbury attorney wrote.

Reached Monday by phone, Bucknam was far less loquacious. She refused to say who she was supporting in the presidential contest, nor what she thought about Trump's remarks.

Many of Trump's most prominent Vermont supporters remain in his camp and eagerly parrot his most salacious — and, in some cases, unfounded — accusations.

"Trump rightly apologized for private but crass comments from 10 years ago," says party vice chair Brady Toensing, who chairs Trump's Vermont campaign. "But while he said bad things, the Clintons have done bad things. There are four dead in Benghazi. There are victims of sexual harassment, assault and even rape who are not believed but instead viciously discredited by the Clinton coterie of political grifters."

Johnston's candidate has been roundly criticized since suggesting at Sunday's debate that he would lock Clinton up if he won the White House. But some Vermont activists seem to think his plan makes sense.

"Hillary should be in jail," says Richard Bailey, a Hyde Park resident who chairs the Lamoille County Republican Party. "I think she's guilty of breaking the Espionage Act many, many times."

According to Bennington County Republican Party chair Carol Dupont, "She caused quite a few people to die." Not only that, Dupont says, but Clinton is also a "predator."

"I think she preyed on the women that her husband had affairs with," the Manchester Republican says. "She took their name and tried to go after them and actually spent money researching one and calling her a 'bimbo.'"

Derby activist Chet Greenwood agrees that Clinton is "an enabler." Trump's comments were "disturbing," the Orleans County Republican Party chair says, "but it's between two adults. The things I've read about Hillary and Bill Clinton are far worse than that."

And Trump, Greenwood argues, doesn't always mean what he says.

"He's not polished. He's not a politician," Greenwood says. "When he says 'no Muslims,' he doesn't mean that. He means he's going to screen 'em."

"You're a guy. So am I. We've probably all said similar things," the New Haven resident says. "There just wasn't a camera on at the time."

"If it came down to him and Hillary Clinton, at least he didn't leave an American ambassador to die in a foreign country," Christiano adds. "She's infinitely worse than Donald Trump could be."

"I'm disappointed in any Republican that doesn't back the Republican ticket," she says. "If you're a Republican, first of all, Reagan said you never speak ill of another Republican."

But Dupont says she'll still vote for Scott — at least to keep Minter out of the governor's office.

"She's a Democrat. She's a touchy-feely person. She's giving everything away," Dupont explains. "We can't afford it ... If you raise taxes any more in Vermont, you're going to kill Vermont completely."

The original print version of this article was headlined "Ditching Donald"