Dissension in the Ranks: Legislative Failures Spark Reaction on the Left 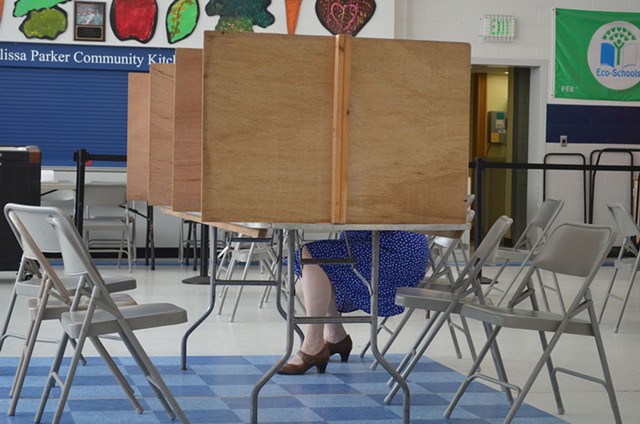 Waves of dissatisfaction are roiling the Vermont Democratic Party, causing concern about possible impacts on the 2020 election.

"Everybody I've talked to, they're very unhappy," said Bill Kuch, chair of the Windsor County Democratic Committee. "The question is, how are we going to message this?"

"This" is the legislature's failure to pass two top priorities: a paid family leave program and a $15 minimum wage. Both bills fell victim to differences between House and Senate leadership.

"I had great hopes going into the session," said Tom Haley, chair of the Bennington Town Democratic Committee. "We had a few members who voted with the Republicans on big bills." Four Democrats in his county cast "no" votes on paid leave: Reps. Cynthia Browning (D-Arlington), Linda Joy Sullivan (D-Dorset), Tim Corcoran (D-Bennington) and Chris Bates (D-Bennington). If only two of them had voted "yes," House Democrats would have achieved a veto-proof majority on the bill.

"I believe we're going to see some primaries in the legislature," Haley said. "I expect some people who haven't been primaried before will be primaried next year." He predicts at least one challenger will emerge in Bennington 2-1, the home district of Bates and Corcoran, and in Bennington 2-2, challenging Rep. Jim Carroll (D-Bennington), who some Dems see as a disappointment in his first term.

Kuch also expects pressure from the left. In 2018 his party lost a sitting representative, Paul Belaski, to current Rep. Zach Ralph (P/D-Hartland), who ran successfully in the Democratic primary. "I could see the emboldening of other Progressives and like-minded Democrats," Kuch said.

Terje Anderson, chair of the Vermont Democratic Party, acknowledges the dissension in the ranks. "There's some degree of disappointment from many quarters," he said. "We do worry about what it means. Can we motivate volunteers? Will we have trouble attracting donors and recruiting candidates?"

Anderson even admits that Democratic officeholders could be targeted. "I wouldn't be surprised to see people take on established lawmakers," he said.

While the dismay is widespread within the party itself, activists and groups on the left have taken the legislature's failures even harder.

"It was so strange," said Jill Charbonneau, president of the Vermont State Labor Council, AFL-CIO. "The legislature effectively closed on Friday [May 24]. Then on Saturday, [Sen.] Bernie Sanders [I-Vt.] is on the Statehouse lawn saying he wants to build an economy that supports workers, not the wealthy." Which prominently included Sanders' call for a $15 minimum wage.

The union movement is a mainstay of the Democratic Party base, providing plenty of volunteers and financial support. But Charbonneau stopped short of calling for open revolt. "We don't want to cut off our nose to spite our face," she said, speaking of the "need to educate the public and members of the legislature" instead of targeting lawmakers.

James Haslam, executive director of the advocacy group Rights & Democracy, called the endgame disaster "so avoidable. We were focused on driving Gov. [Phil] Scott to do the right thing and sign the bills. Democratic leadership let him off the hook."

Haslam was equally pained by House leadership's decision not to schedule a veto session, which would have given lawmakers the chance to return this summer to override any gubernatorial vetoes. As it stands, the next opportunity to override won't come until January. "It's mind-boggling," Haslam said. "They just gave up until next year."

Many in the Vermont Progressive Party are especially disaffected. "We did more than we'd done before to avoid conflict with Democrats in last year's campaign," said party executive director Josh Wronski. "Expectations were rightly very high this session, and [leadership] failed to meet them."

Could disappointment prompt a more antagonistic posture? "We will always work with 'good Democrats' to advance our issues," Wronski said. "There were a significant number of Democrats who, on the big issues we campaigned on, consistently went with Republicans. Are we open to running candidates against incumbent Democrats? Absolutely."

The most likely Dem targets are those who, like the Bennington four, voted against the party on key issues. The Senate features a formidable cohort of entrenched veterans who feel no compunction about going their own way.

Sen. Jane Kitchel (D-Caledonia), as chair of the Senate Appropriations Committee, often holds the line on spending. She was one of four Democrats who voted no on paid family leave on the floor. Other Dems who voted "no" included Sens. John Rodgers (D-Essex/Orleans), Dick Mazza (D-Grand Isle) and Dick Sears (D-Bennington). Rodgers and his district-mate, Sen. Bobby Starr (D-Essex-Orleans), also voted against a minimum wage increase.

Those five have a combined 95 years of tenure in the Senate — from Mazza's 34 to Rodgers' measly seven. They barely bother to campaign for reelection. And they're probably immune from primary challenges in spite of their records, because Senate campaigns are all about name recognition. Sitting senators retire more often than they lose.

Just ask Democrat Val Carzello, who ran an energetic campaign for Chittenden County Senate in 2018; in a Democratic primary for six nominations, she finished a distant seventh. Carzello is pondering another run in 2020 but would face the same long odds.

Challenges to entrenched lawmakers are more likely to occur in the smaller House districts, where motivated candidates can personally interact with virtually every voter. Some of those challengers will likely come from a campaign-training program called LEAD Vermont, held by Rights & Democracy in conjunction with other advocacy groups such as the League of Conservation Voters, the American Civil Liberties Union and the Vermont-National Education Association. "A bunch of people who took it [last year] ran and won," said Haslam. He's hoping for additional victories in 2020.

There's another concern among those on the left — setting the stage for a serious challenge to Scott. "The Democratic leadership didn't do potential candidates any favors by making the governor look like the only adult in the room," Haslam said.

Anderson hopes that a productive 2020 session can lay the hard feelings to rest. "I've talked with several people in both chambers," he said. "Everybody has the feeling that we can't let this happen again ... If they clean it up next year, will there still be lingering disappointment, or will they see the party can deliver?"

Legislative leaders are promising quick action on the unfinished business of 2019. That's easy to say right now, but a lot could happen between now and then. And high-profile votes are always tougher during an election year.

"They need to prove they can walk the walk, not just talk the talk," said Charbonneau. "They need to share the same goals as the people who elect them."

In the legislature, things are rarely that simple.

Oh dear, oh dear. Our colleagues at VTDigger.org are in hot water with the Vermont Department of Public Safety for the sin of telling inconvenient truths.

It all began in mid-March, when Col. Matthew Birmingham, director of the Vermont State Police, claimed that exposure to fentanyl, a powerful synthetic opioid, had caused a state trooper to collapse during a traffic stop. Birmingham termed it a "new threat" to police. Digger initially reported Birmingham's claim, unchallenged, as did other media outlets. A few days later, Digger published a fact-check that found Birmingham's account entirely false, citing multiple experts who said that casual contact with small amounts of fentanyl poses no significant risk.

The VSP and its boss, Public Safety Commissioner Tom Anderson, did not take kindly to that bit of reportage. Anderson responded with a blistering letter slamming Digger, despite the fact that lab tests showed no presence of fentanyl in drugs seized in the traffic stop.

On Sunday, Digger published an account based on a public records request, showing a coordinated effort by Birmingham, Anderson and the department's spokesperson, Adam Silverman, to craft that response. At one point, Silverman urged Anderson to sharpen his language "[g]iven the overall quality of Digger's reporting."

During his 18 years as a reporter and editor at the Burlington Free Press and a stint as president of the Vermont Press Association, Silverman was a staunch advocate for press freedoms. He's clearly adopted the antagonistic viewpoint of his current employer.

The topping on this shit sundae is the fact that the department and the state police are now refusing to provide any additional information about the case — or retract their false claims of a fentanyl overdose.

That's one way to define "serving the public interest."

On a happier note, congrats to former radio personality Charlie Papillo for landing a new gig as a video correspondent. His new series, "Travels With Charlie," showcases lively discussions of current issues in surprising settings, such as a tavern or a bakery. Papillo said he's recorded six episodes; the first two are available at True North Reports, an outlet for right-wing news and commentary.

"I got a phone call out of the blue," said Papillo, former host of WVMT-AM's "Charlie + Ernie in the Morning." The call was not directly from True North, but from longtime Republican operative Brad Ferland. (Note: There are two Brad Ferlands in Vermont politics. One is deputy secretary of the Vermont Agency of Administration; this is the other guy.) "He was interested in doing a video project with me. I'd wanted to take time away from all media, but we talked and it sounded like a lot of fun."

Ferland did not return calls seeking comment. Instead, his associate, Asher Crispe, the director of Papillo's video series, called me back. "This was the brainchild of the two of us," Crispe said of himself and Ferland. "We approached True North Reports about running it. We've also put it on Facebook, and we're open to running it in other places." (True North also did not return requests for comment.)

Papillo was initially leery about an association with True North. "There was some concern over how much control I'd have," he said. "I'd want to present both sides. They didn't say anything about their political agenda."

The series does have a relaxed, non-confrontational approach. In the first episode, Progressive/Democratic Lt. Gov. David Zuckerman and former Democratic state representative Ben Joseph talk cannabis legalization over a game of pool. A forthcoming show will feature a discussion of the Act 46 school district consolidation law in a school bus on the back roads of Franklin County.

"We're having a blast," said Crispe. "Charlie is such a natural. We want people to come away better informed and feeling better."

For a website known for its aggressive political posture, "Travels With Charlie" is a striking departure.

Correction June 5, 2019: A previous version of this story included mistaken information about the Senate Appropriations Committee and the paid family leave bill. The passage has been removed. Further, Tom Haley is chair of the Bennington Town Democratic Committee. His title was wrong in an earlier version.