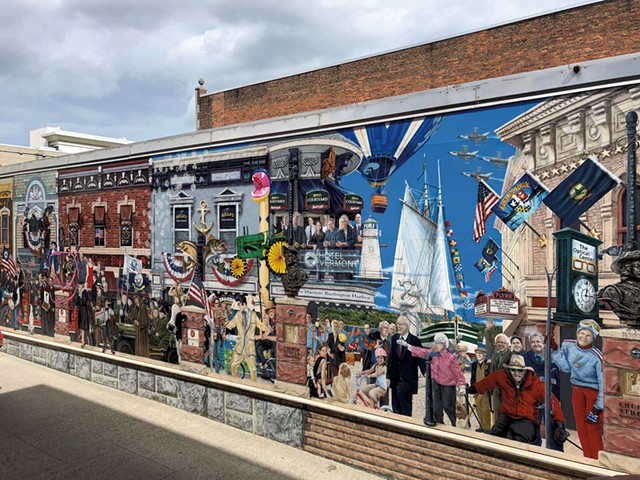 If any humor can be found in the current controversy over Burlington's "Everyone Loves a Parade!" mural, it's in the title. Some locals don't love the mural at all and have accused it of whitewashing history. In response to the outcry, the city council created a public task force in May to come up with recommendations for how to deal with the piece.

If you're new to this public art kerfuffle, here's a recap: In 2009, Québécois artist Pierre Hardy was commissioned to paint "Everyone Loves a Parade!" for the Church Street Marketplace — actually, in the alleyway linking Church Street to the parking garage. The piece was intended to commemorate Samuel de Champlain's "discovery" of Lake Champlain and the ensuing 400 years of local history. Completed in 2012, the mural is emblazoned with corporate logos of companies that sponsored its creation.

In November 2017, activist Albert Petrarca spray-painted the mural's legend with the words "Off the Wall."

Petrarca was charged with unlawful mischief but has continued to rally against the mural, saying it misrepresents the Abenaki. Critics have also complained about the mural's dearth of people of color.

According to emails from Hardy released by the city, the Native person depicted in the mural is meant to be a Huron who accompanied de Champlain. 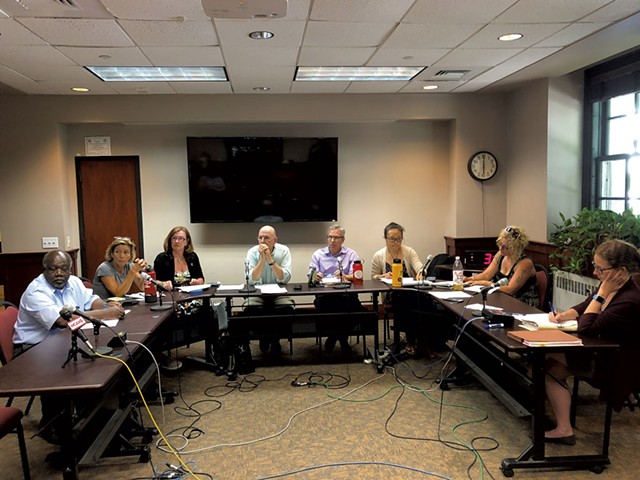 On Wednesday, July 18, the task force members held a public comment session in city hall. Six Burlington residents showed up to voice their complaints; all advocated for the removal of the mural.

"I feel like a historical minstrel," said clinical mental health counselor Vicki Garrison, who is African American. "I'm put in a position to share my heart's truth, and white people are in a position to erase that truth, regardless of how painful it is."

As Garrison's remark implied, the task force is largely white, as are the city council members who will decide the mural's fate. She added that "the mural does exactly what I've experienced my entire life. It promotes ... erasure of people of color."

Before the session closed, Kraft read a statement from Vermont Arts Council executive director Karen Mittelman. It noted that the issue of racism in public artworks is on trial across the country, not just in Burlington.

"The challenge for any community is to find meaningful ways to keep the past and present in an ongoing dialogue," Mittelman wrote. "Ideally, public art and artists play a key role in broadening our vision and helping us all to find ethical and inclusive ways to represent our community."

After the meeting, task force chair Wang said, "It's great that we do have this opportunity to have these discussions and be able to provide these recommendations — as opposed to no process at all."

Those discussions are often aided by testimony from community members and artists, including Hardy himself. After the July 10 meeting, the mural artist sent a letter to the task force at Melincoff's request.

That letter was not read at the July 18 meeting and has not yet been entered into the public record, but Dexter-Cooper gave a copy to Seven Days. In it, Hardy requests "a nice acknowledgment and a simple thank you" from Chief Don Stevens. His reasoning? Recent events have helped the Vermont Abenaki Alliance gain recognition, Hardy believes. One example: a partnership with Burlington to host events and exhibits showcasing Abenaki culture.

Read the artist's letter in full below.

The mural task force will meet twice more to solidify its recommendations and will submit them to the city council for consideration at an August 13 meeting.

Task force meeting times and locations are posted at burlingtonvt.gov.