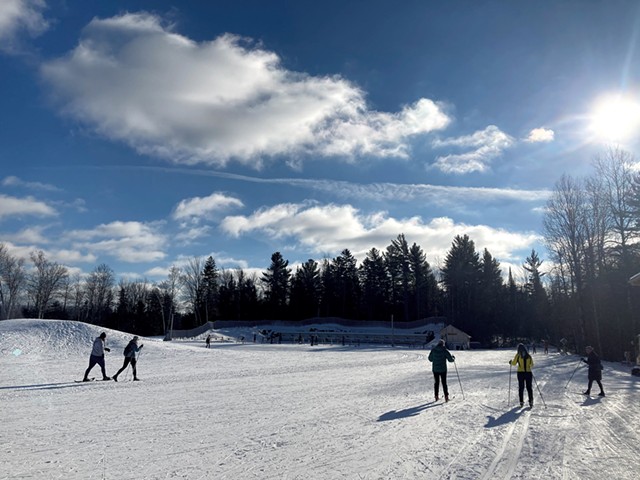 Cross-country skiing, when well executed, is a graceful embrace of physics — a delicate balance of velocity, gravity, friction, force and drag. Driving up the dirt road to Craftsbury Outdoor Center in northeastern Vermont, I watched in awe as skiers swept across the hillsides and darted in and out of the treeline like birds.

It was a sunny day in January, and the skiers looked like they were rejoicing. Somehow, they manipulated the skinny boards attached to their feet to glide where they wanted to glide and grip where they wanted to grip, resulting in a smooth motion and remarkable momentum. I pictured myself among them and thought, I am absolutely going to eat it.

I can report with confidence: It's fun even if you're terrible at it. tweet this

I consider myself a competent downhill skier, but cross-country skiing has always felt like an entirely different beast. It requires going uphill, for one thing, and frankly that was reason enough for me to avoid it for many years — why do for myself what a chair lift can do for me? But given the circumstances of this winter, I have decided to embrace any outdoor activity that presents itself.

After a few hours of skiing at Craftsbury, I can report with confidence: It's fun even if you're terrible at it.

The outdoor center opened in the 1970s on the grounds of what had once been a boys' school called Cutler Academy. Its original owners, the Spring family, sold the property in 2008 to Dick Dreissigacker and Judy Geer, who turned it into a nonprofit.

In the winter, the center boasts 105 kilometers of groomed trails for skiing, along with options for snowshoeing and fat biking. During the summer, runners, cyclists and scullers use the property, and it hosts camps for kids. 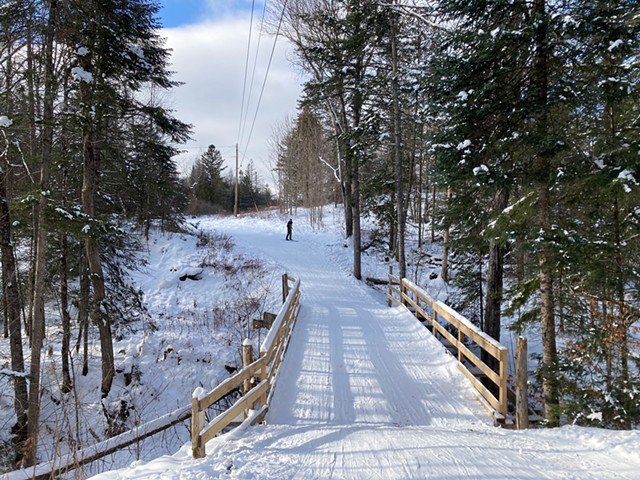 The center has also made a name for itself turning out Olympians. Six cross-country skiers who trained with its Green Racing Project team went on to compete in the 2018 Winter Olympic Games in Pyeongchang, South Korea.

Two days before a friend and I met at Craftsbury, we made reservations online. This is required of all visitors, even those with season passes. The practice allows the center to manage its capacity and keep track of its guests. Walk-in reservations are available only if there's room, so a little advanced online planning is worthwhile.

I arrived to find a line of cars checking in at a hut, but once I told a parking lot attendant about my reservation, he directed me to a lower lot. From there, it took just minutes to buy a day pass and snap into my rental skis. For $25, I got a day's worth of skiing, plus skis, boots and poles. At a downhill mountain, that easily could cost $150.

The outdoor center, a cozy-looking wooden building with a wraparound deck and benches, had the vibe I associate with downhill ski resorts of 20 years ago. I imagined I could stash my boots under a bench and they'd be there when I got back. Within view, winter biathletes, who compete in both skiing and rifle shooting, took aim at a target range. Employees patrolled to enforce social distancing and masking.

While masks aren't technically required once "vigorous outdoor activity" has commenced, I saw most people wearing them even out on the trails. The center also requires that all visitors be in-state residents or certify they have completed a 14-day quarantine if traveling from elsewhere.

Lodging is available for those who need a break from their lives (and cell service) for longer than a day; accommodations include cabins and cottages, as well as dormitory-style rooms. There's an emphasis on sustainability and, according to the center's website, the rooms are "largely heated by a system fueled by wood, solar hot water, and waste heat from the snow-making generator." The lodge, however, is closed to day guests.

As I snapped into my skis, I eavesdropped on conversations around me. A father reassured his tiny daughter that he would teach her to ski, promising that it would be fun. (The child did not seem convinced.) Another man told his companion how he'd skied the entire previous winter using just one pole after having shoulder surgery.

Meanwhile, my friend couldn't get her boots into her newly purchased skis. We fumbled around for a few minutes like two toddlers trying to tie a pair of shoes. When she was finally snapped in, we set off. Our pace was more akin to a shuffle than a glide, but that was fine. Cross-country skiing, at its least elegant, is walking, and I'm great at walking.

It was a gorgeous day, and Craftsbury Outdoor Center was the perfect place to enjoy it. Trails loop through trees and around multiple ponds and lakes. One trail took us past a red barn, set like a pastoral dream on a snowy hill overlooking the valley. On another, we passed over a small bridge. Even on the easiest green runs, which we skied exclusively, there were hills that felt perilous. I could only imagine the challenge expert skiers were facing on black diamond runs.

As we navigated down one hill, an oncoming Craftsbury staffer paused his snowmobile, behind which he was dragging a snow groomer, to give us plenty of space to maneuver. "Don't forget, if you ever get to a hill that's too much, you can always take off your skis and walk," he told us cheerfully. "There's no shame in it."

It was hard work. I sweated through my mask and, at one point, flopped over into a pile of snow for a breather. But the effort was well worth the zen state I achieved out in the woods, feeling like Robert Frost as I observed the sunlight peeking between frozen branches. It would take a lot to make me forget about the pandemic, but the quiet of the Craftsbury trails came close.

My friend and I lasted about two hours — not bad for a pair of newbies — and called it a day, strolling contentedly back toward our cars. Sometimes in yoga classes, instructors talk about "waking up" certain muscle groups, and on that walk I was newly aware of my hip flexors, back and shoulders.

Cross-country skiing, despite my earlier reluctance, had been just what my body and my brain needed.