I arrived at John Brown's farm with an admittedly limited knowledge of the man who, as the old song goes, "lies a-mouldering in the grave." That grave, not far from where visitors to Brown's North Elba, N.Y., home now park their cars, lies in the shadow of the imposing ski-jump tower built for the 1980 Winter Olympics. Many visitors come to the farm to cross-country ski its public trails in winter and walk their dogs in summer.

Most of what I knew about Brown came from my public school education on Long Island in the 1970s: He was the fiery radical and violent abolitionist who, on October 16, 1859, raided the U.S. arsenal at Harper's Ferry, Va., to protest slavery. Ten of his men, including two of his sons, were killed in that raid. Brown himself was hanged for treason and buried on his 244-acre family farm, now a New York State historic site just outside Lake Placid.

The timing of my visit was apropos. This year marks the 50th anniversary of the passage of the Civil Rights Act of 1964. It's also the year in which the film 12 Years a Slave won three Academy Awards, including one for Best Picture. Its main character, Solomon Northup, a free black man who wrote the memoir on which the movie was based, was born and raised in nearby Essex County, N.Y.

Some have argued that, despite the passage of time, slavery's legacy is still alive and unreconciled. Ta-Nehisi Coates, a senior editor at the Atlantic, wrote the magazine's controversial June cover story, "The Case for Reparations." In it, Coates explored not only the era of slavery itself but also its more recent racist outgrowths, including lynching, sharecropping, neighborhood redlining and federal drug laws that punished blacks more severely than whites for essentially the same crimes.

The central message of Coates' piece, as he told Bill Moyers in a May 14 PBS interview, is that this "broken social contract ... is [our] heritage. It's with us. It's with all of us."

So why is John Brown still portrayed and remembered today, even north of the Mason-Dixon line, as the wild-haired terrorist who helped put the blood in "bloody Kansas"? As I came to discover, this tendency to oversimplify Brown's life speaks volumes about our country's complicated history with race — a history that, arguably, is still reflected in the dozen-plus state prisons that are a major economic driver of Brown's home region. Clearly, this was a good time for a historical refresher.

Ironically, it began with a tour by a 20-year-old history buff from a former Confederate state. Emily Fitz-James, a recent college grad from Stafford, Va., was my tour guide of the Brown family home. As no other visitors were present on this rainy weekday, she took my $2 so I could check out the house — the park grounds are free — and gave me the grand tour. 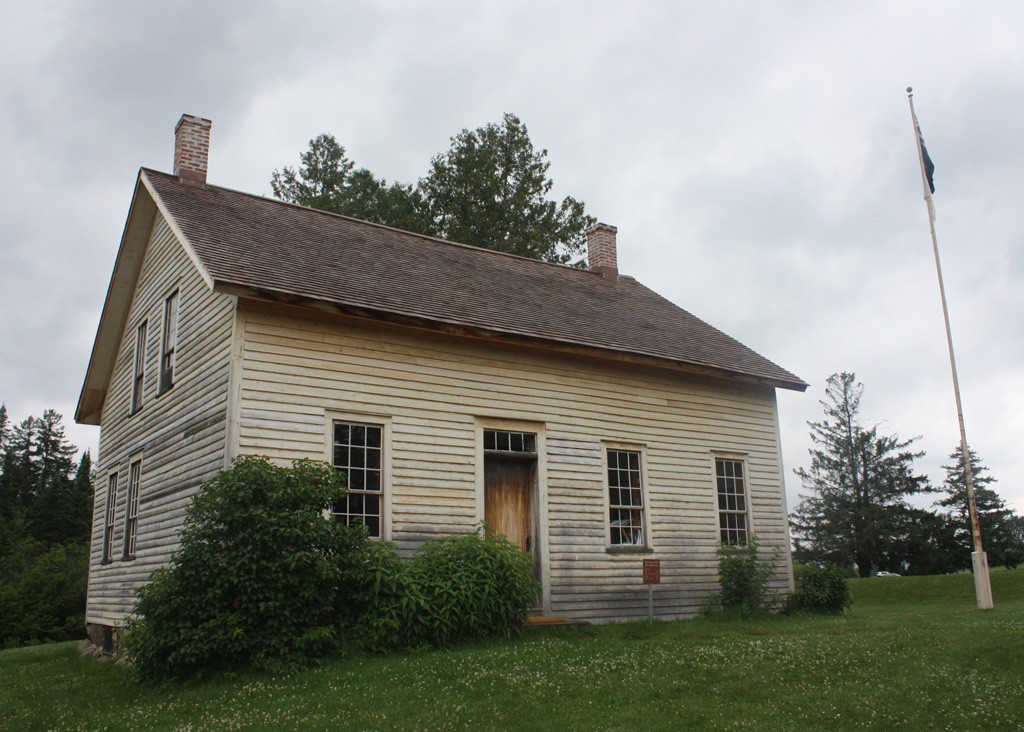 Not that there's a whole lot to see inside. Built in 1855 by John Brown's son-in-law, Henry Thompson, the house has just three small rooms — two downstairs and one upstairs. Only one holds original furnishings, including a desk, bookshelf and cast-iron stove. Except for a couple of authentic boot jacks carved from wood, the rest of the furnishings are historically accurate replicas of 19th-century objects: rocking chair, butter churn, water yoke and bed wrench — the last of which, Fitz-James eagerly noted, enabled the Brown family to "sleep tight" on their tiny straw mattresses.

The little house must have felt quite cramped, especially in winter. In all, Brown fathered 20 children, though he only lived in this house with his second wife, Mary Ann Day, with whom he fathered 13 kids. (His first wife died giving birth to Brown's seventh.)

"Brown probably only visited six or seven times a year," Fitz-James said, noting that the abolitionist was frequently away in Kansas with his older sons, fighting to make it a free state. Still, Brown often sent home grain, if not cash, to support his family, who struggled to survive the severe Adirondack winters.

One interesting relic on display: an itemized bill from Brown's funeral, which lists "washing and preparing the body" and a 5-foot-10-inch coffin, as well as "removal to railroad," "keeping the corpse on ice" and attendants at two funeral parlors, one in Brooklyn and another in lower Manhattan's Bowery.

The exhibit also features a now-famous photo of Brown appearing to swear allegiance to a flag. The flag bore the initials SPW, for "Subterranean Pass Way," aka the Underground Railroad.

Once outside, I checked out Brown's grave itself, one of three surrounded by an eight-foot, wrought-iron fence. It's believed that, in all, 12 men are buried in the three graves. The first contains Brown's body, his headstone protected behind Plexiglas. The second holds Watson Brown, one of his sons. The third is believed to contain the bodies of 10 other men who participated in the Harper's Ferry raid.

Just beyond the gravesites is the only other original structure on the property: a barn, which one visitor described as she exited it as "a rather odd space." From the outside, it looks like a normal 19th-century barn, gray and weathered. But inside it's a modern, fluorescent-lit classroom that, on the day I visited, reeked of disinfectant. In the front of the room, a monitor screened a 10-minute video about the history of the Underground Railroad in the Adirondacks and Champlain Valley.

Martha Swan, the group's executive director, is a Spanish teacher in the tiny Adirondack town of Newcomb, N.Y. Swan — who admits she, too, once perceived Brown as "that crazy white guy who went around killing people" — founded the group 15 years ago. Over the years, JBL has organized a variety of community events, discussions and exhibits, many of them held on the farm.

These include a traveling exhibit called "Dreaming of Timbuctoo." It explores an 1840s project that involved distributing 120,000 acres of Adirondack land to free black New Yorkers — 40 acres apiece — to enable them to meet the state's then-legal prerequisite for voting. Though most of the 3,000 grantees never occupied that land, one of the communities that settled in the Adirondacks came to be known as Timbuctoo.

"We've never seen Timbuctoo on a map," Swan noted, "but it's enough of a fabled but very real place to have a poetic resonance with what that whole project was all about."

Another project started last year, called "The Correction," is a series of presentations and community conversations about North Country prisons and the impact of former New York governor Nelson Rockefeller's drug laws on people living in and around the Adirondack Park. Those are "people for whom coming here has not been a choice or a pleasant getaway," Swan said.

For Swan, whose goal is to make local histories meaningful and relevant, the presence of more than a dozen state prisons — whose occupants cannot legally vote but are nonetheless counted in those counties' U.S. Census tallies — is a "painfully ironic" reminder that John Brown's ideals have yet to be fully realized. m

The original print version of this article was headlined "Madman or Hero?"