Vermont has some remarkable sculpture parks, but few are as serene, navigable and beautifully manicured as the Seven Springs Garden & Sculpture Park in Manchester.

Most of the sculptures sit against a sweeping view of the Green Mountains. tweet this

The park is the project of Stan and Sylvia Stroup: Stan selected the sculptures, and Sylvia, his late wife, was the gardener. When the couple acquired the property in 1998, its pre-Civil War house was already surrounded by beautifully planned gardens, thanks to the Childs family, who had owned the place for three generations.

The Stroups kept those gardens, leveled the cow pasture behind the house, preserved and augmented the adjacent apple orchard, and added a Japanese-inspired garden and a shady woodland trail. Stan sited the sculptures, and Sylvia created their landscaped settings with help from North Hill Garden Design in Readsboro and other professionals. The couple named the park for the natural springs a neighboring farmer told them about that originate on both their properties.

On a recent sunny weekday, Stroup, a lean, quiet man, walked the grounds with a reporter. The retired lawyer worked at Wells Fargo in Minneapolis as general counsel; he and Sylvia bought the Manchester property after years of summering in Vermont. She died in 2017. He now lives in the property's house while the park is open, from June through September, and spends winters in Hilton Head, S.C.

When asked whether he would ever add more sculptures to Seven Springs, Stroup said with a chuckle, "I hope not! They're a lot of work." He chose the sculptures mainly by looking at artists' websites after encountering their work in person. The park is complete, and he plans to create a foundation to preserve it for future visitors. It first opened to the public in the middle of last summer as a test run. Despite the short season and limited publicity, the destination attracted hundreds of visitors, Stroup said.

Parking lies past the guesthouse, which the couple built uphill from their home in 2007, and next to a red-roofed sugarhouse. On Thursdays and Saturdays, when the park is open, volunteers from the Garden Club of Manchester welcome visitors and distribute maps and brochures.

From the sugarhouse, the park's entry is as understated as possible: You walk past three flat boulders placed in a line on a grassy knoll. There is no set path; visitors can enter the tree-filled Japanese garden via an arched wooden bridge or traverse a raised walkway leading into the woods. The latter choice reveals the first sculpture at its far end: Norwich artist Phil Thorne's "Open Vessel," an assemblage of flared sheets of stainless steel.

The Japanese garden, designed on commission by local architect Ray Smith, features winding gravel paths that lead past Asian stone garden accents, as well as a 1930s French art deco metal gate, which the Stroups placed in a torii-like timber frame. A mushroom-shaped English staddle stone, originally used to support the corner of a grain crib, might be easily missed at knee level, where it sits among ground-covering plants next to a stone wall.

"The nice thing about a garden is the sense of mystery," Stroup commented.

Some of the mystery lies in Sylvia's plantings. When asked to identify a pink-blossomed bush, he pulled out his phone, saying, "I don't know, but I have an app for that."

The park has two roughly parallel defining borders. A shallow, stone-lined arroyo, which the Stroups installed to follow the natural path of snowmelt runoff, links the various garden areas and is planted with hostas, reeds and other beds. Flat bridges placed at intervals allow easy crossing to the sculptures on either side.

On the southern edge of the property, a mossy drystone wall likely dating from the 19th century follows an allée of equally old trees. Chester's Sugarrock Landscapes rebuilt the wall. 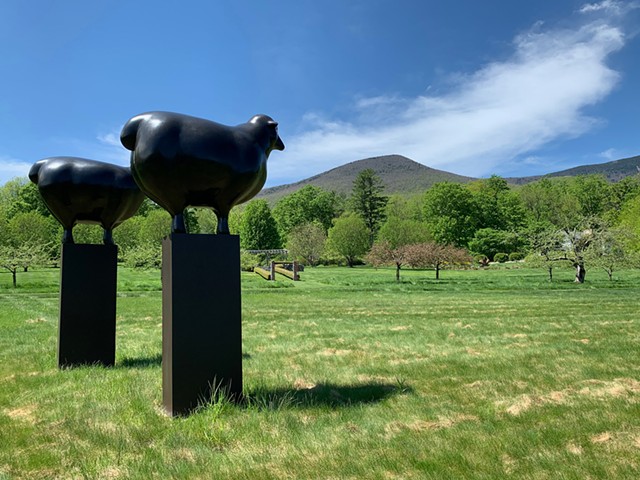 Between these two verges lie the pasture and orchard, where most of the sculptures sit against a sweeping view of the Green Mountains to the east. Oodles of flawless grass, discreet flower beds and copious seating — including large, flat boulders pulled from the pasture during construction and repurposed as benches — make a sculpture tour effortless and casual.

Many of the sculptures, meanwhile, introduce rather different emotions. The figurative bronze by Thomas Ostenberg, titled "...but, I feel fine," is a balancing act that shouldn't work: an acrobat doing a one-handed handstand on the back of a twisting horse that rides, rather than pulls, a two-wheeled cart. The Roman-looking contraption appears about to careen down its sloped base. The whole sculpture evokes joyful audaciousness and sure destruction at once.

"Layers of Different Directions," by Michigan ceramic sculptor Mark Chatterley, groups seven genderless, life-size human figures together in an arrangement that looks both uncomfortable and beautiful. Standing, leaning on each other, sitting or crouching, they fit together like a puzzle yet nearly crush each other.

Animals are the subject of several sculptures, among them the pair of 12-foot-tall minimalist bronze sheep on towering pedestals, by Peter Woytuk, that overlook the property from its eastern border. Woytuk, originally from Minnesota, is an internationally known sculptor who works in a scale that only foundries in Thailand and China can accommodate. (He recently made two life-size bronze elephants.)

"Goats," by Connecticut artist Roger DiTarando, are three copper-and-bronze creations with wildly tufted (and sharp) woolly coats, mounted on and around a boulder. And a spirited horse, "Gallant Bess," by driftwood sculptor Rita Dee, hails from the opposite side of the property. Its palpable energy is captured in curving sticks recovered from the Hudson River.

Asked whether he had a favorite sculpture, Stroup said no; he likes "the variety." Several abstract works illustrate his range in taste.

Three organically curved bronzes by Vermont sculptor Richard Erdman, who grew up in nearby Dorset, grace the property. "Continuum," in particular, morphs with every slightly shifted sight line, though a half-round bench positions visitors to regard it against the stunning mountain backdrop. 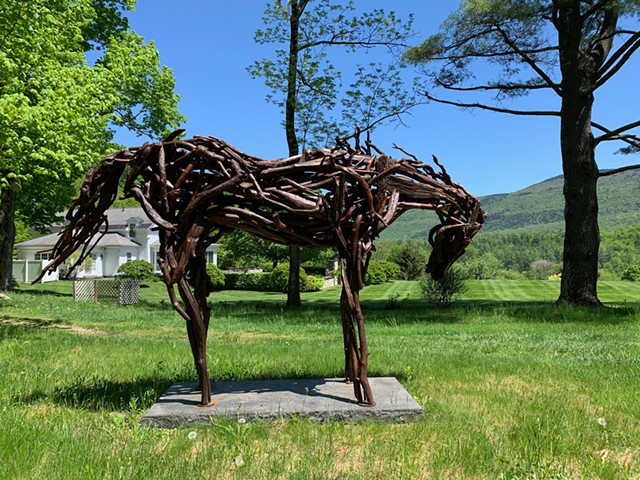 George Sherwood, a Massachusetts artist who attended the University of Vermont, is represented here with "Pirouette," a stainless-steel construction of curved branches that appear to weave and dance among each other as the piece rotates in the breeze. Vermonters may recognize Sherwood's kinetic sculptures from showings at Shelburne Museum and the Vermont Institute of Natural Science in recent years.

Another abstraction, titled "Gabriel," is a low, branched bronze by New York sculptor Hans Van de Bovenkamp. It graces a flower bed at the far end of the orchard, where an elongated mown-grass path, lined with a center band of old bricks recovered from a dismantled factory in New York, takes a hairpin turn. The design idea came from an English garden, Stroup said.

As the Garden Club of Manchester vice president Becky Burke put it during a phone call, "There are no weeds."

Burke was among the volunteers who staffed the park during its inaugural season last year. "People were just amazed by it," she recalled. "There are not many gardens around like it."