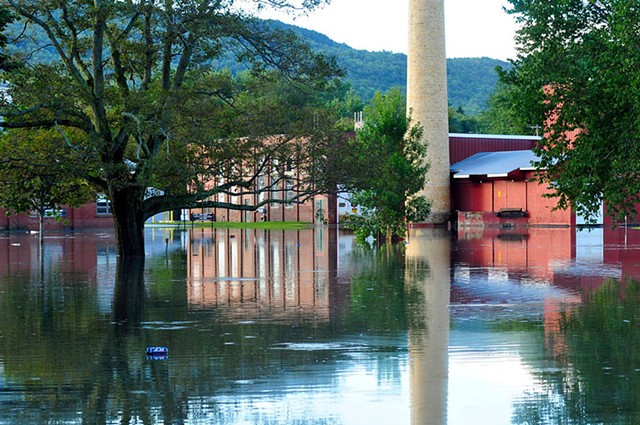 Last September, at the launch event for the Vermont Arts and Culture Disaster and Resilience Network, attendees were asked to rate potential disasters in terms of their likely threat to Vermont. Among choices were the usual suspects, such as natural disasters, as well as some more obscure possibilities, including space noise, recalled network organizer Rachel Onuf in a recent interview.

"Pandemic, of course, was on the list," Onuf said. "And we all said it was low risk. One person said it was a medium risk."

Just a few months later, the disaster came to them as the coronavirus pandemic shut down gatherings and forced museums and galleries to close their doors. While VACDaRN, as the acronym goes, isn't distributing grant money or organizing volunteers, it wants to help Vermont's arts and culture sectors prepare for all kinds of emergencies, pandemics included.

Onuf is director of the Vermont Historical Records Program, run by the state Archives & Records Administration, and she's the state's "roving archivist." During non-pandemic times, she guides local historical societies on keeping their collections protected and relevant to their communities. VACDaRN is a partnership of Onuf's administration, the Vermont Arts Council and the Vermont Emergency Management Association.

"It's wonderful if the fire chief has been in your building before he has to be there when it's full of smoke." Rachel Onuf tweet this

"Arts and culture organizations tend to have very little in the way of a safety net," Onuf said. VACDaRN, she said, has a few "fairly modest goals": Build relationships among people in the state's arts and culture communities, encourage them to collaborate across sectors, provide training and resources for emergency preparedness, and support artists who want to help communities move beyond a tragedy.

Onuf also wants to strengthen communication between cultural institutions and their local first responders. "It's wonderful if the fire chief has been in your building before he has to be there when it's full of smoke," she said.

Amy Cunningham, deputy director of the arts council, said it's vital that emergency management officials understand the needs of the creative economy, and vice versa. To that end, VACDaRN included Ben Rose, recovery and mitigation section chief at the state's Emergency Management Association, in much of its planning.

"For the folks like me and others in the arts and culture sector to have these open communications, and to have someone like Ben Rose from emergency management listening and understanding what our needs are ... is just critical," Cunningham said. "I can't overstate how useful that is."

With a $15,000 grant in hand from the Performing Arts Readiness Project, Onuf and other organizers held a series of planning meetings in 2018 and 2019 to decide on VACDaRN's focus. That slow, deliberate process has been somewhat subverted by the pandemic. The organizers hustled to get the VACDaRN website live with resources, and Onuf has been sending frequent emails to roughly 100 people working in arts and culture in the state, with links to national resources, webinars and funding sources.

Onuf said she's also interested in documenting how organizations rebound from the pandemic and the likely subsequent economic recession, creating case studies for future efforts. She had hoped the network would offer in-person trainings at some point, but that's on hold for now.

The pandemic has emphasized how unpredictable and surprising disasters can be. Vermont's most recent disaster, Tropical Storm Irene, flooded buildings and wiped out historical covered bridges.

But Onuf wants to do more than help organizations prepare for the dramatic, visible catastrophes.

"We're not just thinking about paper collections and what happens when they get wet," Onuf said. "No two disasters are going to be the same. So how can you get yourself in the best position for whenever that thing hits?"