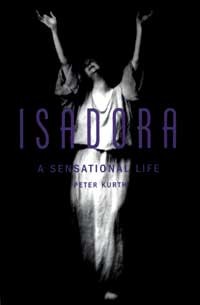 The mother of modern dance didn’t much like the art form. Not the dance of the time, anyway, which was the late 1800s and early 1900s. As Isadora Duncan was giving birth to the concept of new movement, dance barely existed outside of music halls in the United States. There was classical ballet in Russia and Paris, codified into mechanical artifice, and everywhere else there was entertainment — a “depraved profession,” vaudeville.

Duncan changed all this, not only pioneering modern dance, but also humanizing ballet and influencing art, sculpture, literature, fashion and women’s rights. You need historical context to appreciate just how revolutionary a life she led, and that’s exactly what Peter Kurth provides in his new book, Isadora, A Sensational Life.

That Duncan was extraordinary, pioneering and a little wacky made her perfect subject matter for the Burlington biographer, who seems always to choose larger-than-life women for his literary focus. Two previous books, each of which took a decade to produce, detailed the lives of the Russian princess Anastasia and the barrier-breaking American journalist Dorothy Thompson.

Isadora is exhaustively researched — evidenced by 62 pages of footnotes — and borrows from previous biographies as well as Duncan’s colorful autobiography, My Life. The latter was published posthumously, in December 1927, immediately after she was killed when her six-foot scarf got caught in the wheel of a moving convertible. Kurth sleuths out his subject’s omissions — such as a pregnancy and miscarriage early in her career — straightens out faulty chronology, and sifts through Duncan’s sometimes-romanticized version of her own story.

Although the book is dense with detail, both the natural flow of the writing and the subject propelled me through all 650 pages. Unlike his newspaper articles, which are full of attitude, Kurth holds back his opinion in Isadora. The characters and the velocity of their unfolding history speak for themselves. His writing seamlessly binds together their voices and the facts.

One important disclaimer: I spent my twenties sweating through the rigors of modern dance training in New York and San Francisco. So Isadora was fascinating reading for me.

Would the book have captured me if I had no interest in dance? Perhaps not to the same extent. But Duncan’s groundbreaking artistic contributions and her outrageous, scandalous lifestyle provide plenty of spice for readers who couldn’t care less about a plié. The influence she had on her friends and lovers alone — including Maurice Ravel, Stanislavsky, Rodin and the sewing-machine tycoon Paris Singer — easily holds your attention.

Kurth admits up front that he knew very little about dance when he began the book. Regrettably, he fails to connect the dots to all that followed Duncan in terms of movement history. You can trace Isadora’s legacy to every major modern dance technique, from the use of “Oriental” themes to Martha Graham’s signature contractions. Without the future context, readers are missing some of the electrifying “a-ha’s” that anyone intimately familiar with modern dance would experience.

Isadora Duncan was born in San Francisco in 1877, just as her parents’ marriage was collapsing. Her mother’s bitter recriminations about men and their power over women inspired the teen-age Isadora to vow to fight for the emancipation of women and the abolition of marriage. Her mother made money by playing the piano, and Isadora and her siblings taught social dance in Oakland. Even then she was doing her own thing, with a style based more on the movement of trees in the wind than any known technique.

It was there Isadora discovered “the central spring of all movement” — the actual impulse to move, which she believed sprang from the solar plexus. A few years later, Graham would decide that movement began in a series of contractions and releases in the pelvis — just a short biological distance “south.”

The important point here is that, before Isadora Duncan, dancing was about moving your legs and arms. She stripped down the movement, found its emotional and physical core, and moved from the torso. The idea that emotion precedes movement would be echoed later in Russia when Duncan’s friend Konstantin Stanislavsky created his Method acting system.

Duncan’s ideas, and her dancing, were not overnight successes. The “cult of Isadora” took some time to build, and seemed to be based as much on her controversial life as on her dancing. Kurth’s biography begs the question of how much success is talent, how much sheer will. Duncan definitely had a vision of new dance that was less an invention than a rediscovery of the Greek ideal — natural movement, long before corsets and tutus. Now we think nothing of watching dancers skim across the stage without shoes, but in Duncan’s time, it was unheard of, and quite shocking, to see a woman’s naked leg or bare foot in public.

Duncan had enough ambition — some called it narcissistic madness — to jettison friends, lovers and countries in order to further her dance career. She would dance for the Prince of Wales in London one night and be living on the street the next — something Kurth informs us actually occurred — rather than compromise her beliefs. Nor was she shy about expressing her opinions in post-performance discussions: ballet was a hideous, un-American form; no movement should be done for which you need special training — an idea that anticipated the pedestrian theories of post-modern dance; art increases passion; and women should be in complete control of their destiny. Kurth writes:

She was not a feminist in any organized or political sense, but just as she rejected marriage as oppressive and unnecessary, so she denied that a dancer needed men to direct her, train her, guide her, clothe her, shape her body, and assign her roles that trivialized her utterly…

Not all of Duncan’s beliefs were high-minded. She was a racist, and believed that dance performances should be for the “elite,” although she did go on tour to a dizzying number of countries.

She had to leave the U.S., where she was considered something of a flake, to gain rocky success in Germany, Hungary and, in 1904, in St. Petersburg, Russia. There, according to the creator of the Ballet Russes, she gave Russian ballet “a shock from which it would never recover.”

Kurth details conflicting reports about how much influence Duncan’s performances exerted on the great Russian choreographer Michel Fokine. It is believed that her fluid movement changed the “Dying Swan” solo in Swan Lake, from a mechanical piece to an emotional star turn for ballerina Anna Pavlova.

Duncan’s personal life also had a cultural impact. Alternatively worshipped or hissed off the stage, her life seemed devoid of peaceful moments. She gave birth to three children by different fathers. Two were drowned in a car accident in the Seine River in Paris, and the third child lived less than a day. She made a habit of propositioning “artist geniuses” to father her children, many of whom turned her down.

Her love affairs were tempestuous. She finally broke her pattern and married Russian poet Sergei Esenin, a man half her age who treated her with open contempt. Each is credited with “ruining” the other. As Kurth writes, Duncan’s “honeymoon tour” with Esenin was “fifteen months of alcoholic bedlam and disaster.” On an American tour, they had messy public fights, hurled dishes and trashed rooms — rock-star behavior.

Duncan made several attempts to establish a “school of life,” but war, poverty or public opinion hindered her. She had a talent for befriending rich patrons, only to outrage them later and have support withdrawn.

In 1921, she joyfully accepted an invitation to Russia to found a new dance school. There, she threw herself into a new passion — Communism — despite the fact that only a fraction of Russian artists were party members.

Isadora had no difficulty becoming a communist herself, untroubled as she was by any consideration of politics, theory, economics, Russian history, or the working of government. After only a week in Moscow, she caused a scene at a party… Isadora arrived in a red dress and turban, only to find her comrades listening to a young soprano, dressed as a shepherdess, singing French country songs at the piano. She was outraged: “What do you mean by throwing out the bourgeoisie only to take their places?… You are not revolutionists… Usurpers!” She ran out. The incident was talked about all over Moscow.

Duncan was also apparently untroubled by American politics, returning in 1922 with Esenin as the “representatives of young Russia” just as waves of anti-Russian sentiment were rising, and J. Edgar Hoover was assuming power and looking for “red” propaganda. Duncan gave it to him. She waved a red scarf and bared her breast in Boston, and was banned for it. For the rest of her U.S. tour, policemen stood at the edges of the stage to make sure she kept her clothes on. Isadora Duncan had worn out her welcome in her native country.

Kurth has given us a tantalizing look at the life of an unforgettable, charismatic pioneer and diva who fundamentally shifted the arts by dancing — childlike and barefoot — in a gauze tunic. She never allowed her dancing to be filmed, to the great regret of dance historians, so we only get a sense of this woman “bewitched by music” from her biographers.

In answering a challenge from her husband that a dancer can never become great because her art is transitory, Duncan replied, “No, for a dancer, if she is great, can give to the people something that they will carry with them forever. They can never forget it, and it has changed them, though they may not know it.” Thanks to Kurth’s Isadora, they do now.