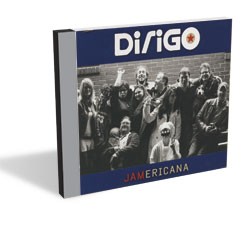 When a band breaks up, its members don’t neccessarly put aside music altogether. Case in point: Jamericana, the first release by Maine’s Dirigo. Guitarist Luke Patchen Montgomery and bassist Erik Glockler trace their genealogy to Vermont’s now-defunct Strangefolk. But, note to fans of those jam-pop darlings: Don’t expect the usual here. Dirigo comprise a new union of players with outside influences in tow. From blues to folk, R&B to pop, this record tests the sonic waters. Jamericana is less a reinvention than a continuation of previous aspirations. But it offers genre hopping in small, digestible doses.

For die-hard Strangefolk fans, the first track, “Wrong Way,” will instantly satisfy any withdrawal symptoms. It’s a fine introduction but does not set the tone for the album. And that’s a good thing.

“For Jenny” just might be the feel-good center of the album. It is acoustically driven, with strong harmonies and a down-home feel, courtesy of Maine guitar legend Steve Jones and his seamless performance on the slide. Throughout the album, Jones seems to be the Americana link in this chain. His tasteful lines pepper the record with elements of country and blues.

“Before the Moment’s Gone” is a lighthearted love song that again features Jones’ guitar prowess. His heartfelt vocals distantly reflect the vocal styles of Bruce Springsteen and Michael McDonald.

The band’s backbone, drummer Ginger Cote, soars through this record effortlessly, with chops to make the boys run for cover. Her drumming is on point throughout each song and keeps everyone solidly aligned.

As its title implies, Jamericana is a hybrid of jam and Americana. But the record leans more toward the latter genre. Its final track, “The Scene Fades to Black,” offers a beat from the disco era — one that the jam scene has hijacked and used as a secret weapon on young audiences. Dirigo utilize this feel to their advantage, with an extended jam and a Robert Smith-worthy vocal sentiment. It’s an excellent closer.

“Dirigo” is Latin for “I lead.” Based on the strength of Jamericana, it’s safe to say this band will soon be leading an audience of its own.