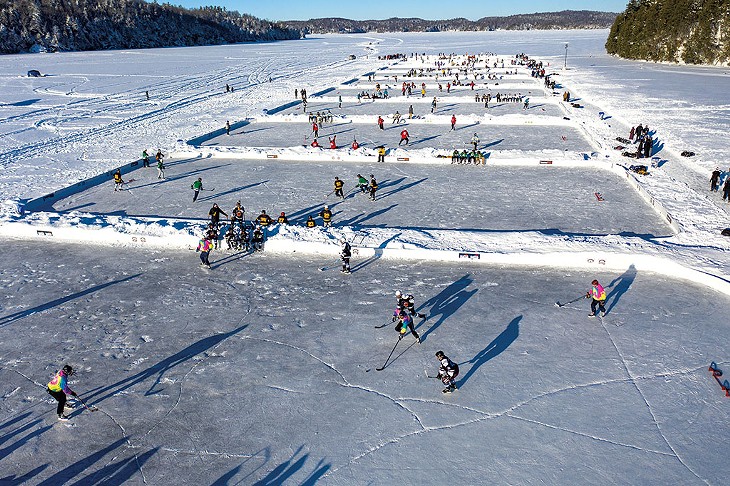 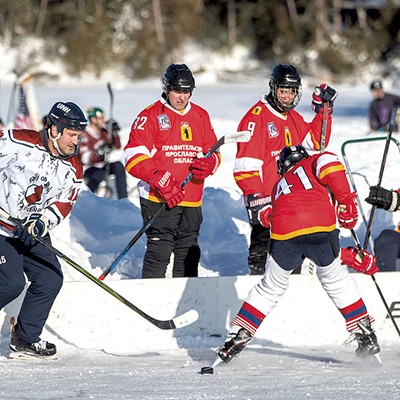 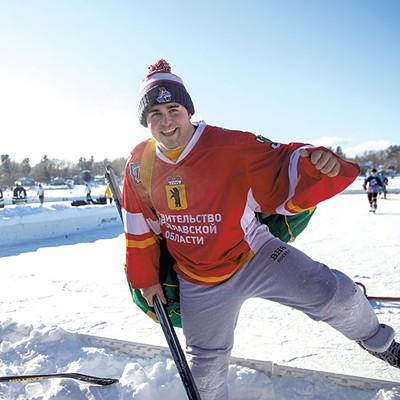 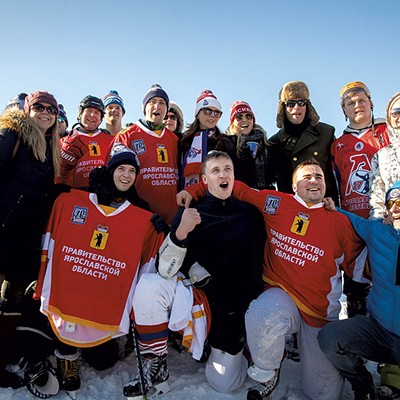 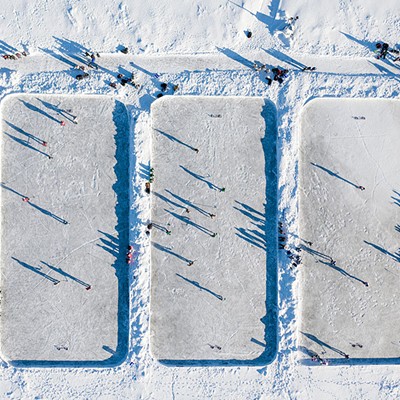 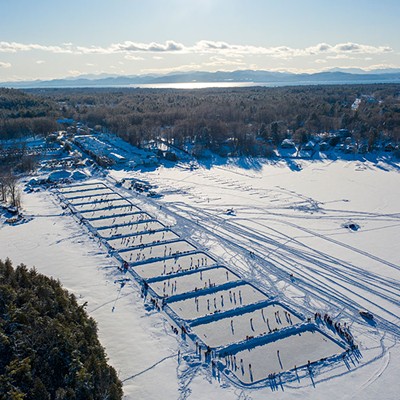 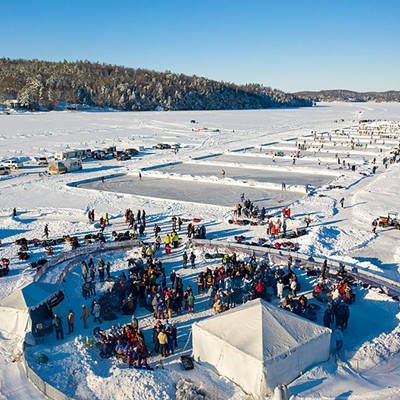 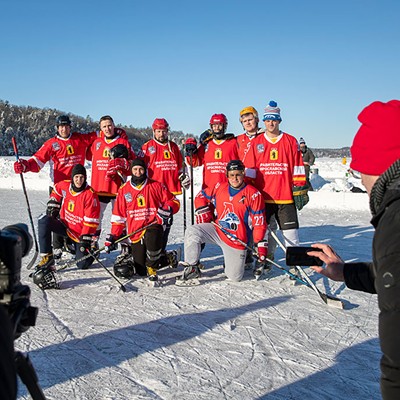 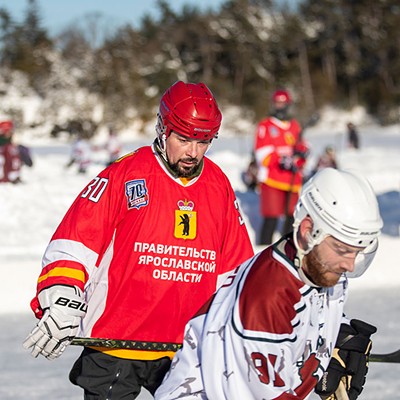 On the farthest of 14 rinks etched into a snowy Malletts Bay in Colchester, the men in red were going goal for goal with their Boston foes. Only a few people walked far enough onto frozen Lake Champlain to watch, but even from a distance, the Cyrillic-lettered jerseys were unmistakable.

A few members of the foreign delegation watching the game turned their heads.

"That's awesome!" the man added, as if to clarify.

The Russkis had come at the invitation of their American counterparts in Burlington. Their visit was the latest cultural exchange in the long-standing "sister city" arrangement between the Queen City and Yaroslavl, a city of 600,000 northeast of Moscow.

The relationship was forged in 1988 when Burlington's mayor Bernie Sanders and Jane O'Meara Sanders stopped in Yaroslavl during what the mayor would call their "very strange honeymoon" in the Soviet Union. At some point on the trip, Sanders sat shirtless and singing "This Land Is Your Land" for his Soviet hosts at a table lined with vodka bottles. Video of the low-level diplomacy went viral last year, and Republicans seized on it to paint the presidential candidate as a communist sympathizer.

Over the years, the cities have exchanged artists, students, businesspeople and bureaucrats through visits organized locally by a volunteer nonprofit group. Their first foray into athletic competition took place in 1991, when Yaroslavl's professional hockey team played an exhibition game against the University of Vermont squad. The Russians won, 3-1, despite missing some players because of the upcoming Winter Olympics, the Burlington Free Press reported at the time.

Last weekend's event could have been an episode of "Parks and Recreation." The Yaroslavl Bears, as the team called itself, was an eight-man amateur squad composed mostly of municipal employees from the Yaroslavl region. Delegation head Aleksandr Legus, 32, runs Yaroslavl's "physical culture and sports" department. He started playing hockey in 2014, inspired by the Olympic games in Sochi, Russia.

The Bears signed up to play in the Labatt Blue-sponsored Lake Champlain Pond Hockey Classic, an annual open-air tournament that draws die-hard amateurs from the Northeast and beyond. They competed in the Shinny 21+ division for less-skilled players who, according to the tournament description, "can still dangle and toss some sick sauce while taking some spins on the ice."

The tournament happened to coincide this month with the 40th anniversary of the Winter Olympics in Lake Placid, N.Y., some 60 miles west, when the amateur American men's hockey team famously upset a stacked Soviet squad on its way to earning gold.

By Saturday afternoon, the Bears needed their own Miracle on Ice to advance to the tournament playoffs. After a week of meetings with UVM Russian language students, local collegiate hockey players and Burlington Mayor Miro Weinberger, the Yaroslavl delegation played its first two games Friday during a blinding snowstorm. It lost both by wide margins.

Clear skies on the second day turned the tournament "village" into a bustling tailgate that filled two parking lots, plus that of Rozzi's Lakeshore Tavern above the bay. The 14 temporary rinks stretched out onto the ice in one long row, surrounded by hundreds of stick- and skate-toting players, spectators, and dogs.

The ice rinks had been cleared of 15 inches of snow, which made them appear sunken beneath the surface of the lake. Kids dropped in between games to pass pucks while players warmed up in the beer garden. Others sipped their beverages beneath tent canopies staked into the ice along a row of trucks and RVs. A large "Trump 2020" flag flew proudly from one rink-side setup.

After a horn blew to signal the end of each round of games, the narrow path connecting the rinks to the locker-room tents turned into a runway of player plumage. Team names emblazoned on jerseys were a mix of clever, campy and crass. Some of the afternoon's more family-friendly matchups included Net, Sticks and Chill versus Udder Confusion and Hot Mess Express versus Hockey Stank.

The visitors from Yaroslavl documented it all on their phones, from the moment they walked onto the lake until seconds before face-off. Once inside the rink for their first game on Saturday, they cut short their pregame stretches to invite their opponents, the Boston-based No Shows, to pose for a group shot.

Team interpreter Daina Rashchepkina, of Yaroslavl's division of international relations, and Oliver Carling, president of the Burlington sister city program, cheered from the sidelines. The competitors, they observed, were playing more comfortably with two games under their belts. Pond hockey is different from indoor hockey in several ways, one of which is that there's no goalie. Instead, each team protects two small nets that are shaped like a pair of six-packs set a few feet apart.

The Bears also had a secret weapon. One of their players was sidelined with the flu, so in his place they subbed a former UVM club hockey player. Steven Ushakov, 25, was literally born of the sister city program. In the early '90s his father, Sergei, traveled to Burlington as the sound technician for a Yaroslavl band. Through the musical exchanges, he fell in love with a Vermont woman and moved to Burlington, where Steven was born.

Wearing No. 37, Ushakov notched the Bears' first goal of the day. The No Shows regained the lead on a long, lucky floating shot that somehow bounced off the cragged ice and into the Bears' net. The Bears responded, and by the time the distant horn blew, they'd won, 5-4.

"I'm glad we got a win. That's all I care about," Ushakov told a friend outside the locker tent afterward.

Rather than imbibe a celebratory round of Labatt, the delegation tracked down tournament commissioner Scott Crowder, of New Hampshire, to give him a gift from the city.

Legus and Rashchepkina displayed an engraved wooden box that contained office supplies and a separate carving of the Yaroslavl coat of arms, which features a bear holding a medieval ax.

Crowder returned the appreciation. "Thank you guys for coming," he said, noting that they'd traveled farther than any of the other 150 or so teams. "I know it's a long trip, but it's pretty awesome."

They sized up their next opponents, a Nashville, Tenn., team named the Sloppy Tape Jobs. One of Ushakov's friends tried to explain the name to Rashchepkina by describing the process of wrapping tape around the blade of a hockey stick. The innuendo went untranslated.

The STJs jumped out to an early, insurmountable lead. The Bears' cheering section shouted "Ya-ro-sla-vl!" and "Get it done!" Even a surprise boost from Burlington City Councilor and hockey buff Adam Roof, who put on the No. 37 jersey and scored a goal, wasn't enough to lift the Russians.

As the deficit grew, a few fans from the delegation danced to techno music echoing from a speaker inside a five-gallon bucket.

The game ended with a scrum for the puck involving Ushakov that turned to pushes and jawing. The beef was quickly forgotten, though, as the Yaroslavl players congregated at center ice. The loss meant their tournament was over, but no one seemed to care.

"Bears!" they said in unison, as they grinned for a camera one last time. Then they left for their hotel.