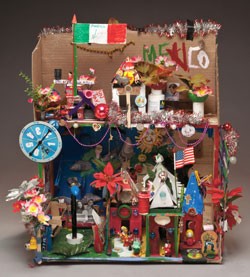 An unconventional show of dioramas at the Vermont Folklife Center in Middlebury adds a political dimension to the term “outsider art.” The collection of a dozen autobiographical pieces made by Mexicans working on Vermont dairy farms also gives an unsettling twist to the notion of artistic anonymity.

These heartfelt constructions made of wooden boxes and dollar-store-type materials qualify as outsider art in that they’re the products of untrained hands. Vermont artist B. Amore, one of the show’s organizers, prepared a booklet on outsider art that she presented to the farmworkers, many of whom had never created a piece for public display.

“The idea was to demonstrate that art didn’t just happen in artists’ studios,” explains migrant farmworker advocate Susannah McCandless of New Haven. “We wanted to show that everyone has the potential and ability to create art.”

Like others classified as outsider artists, the farmworkers stand far apart from the cultural mainstream; these amateur art makers have only fleeting, clandestine contact with the society around them; they milk and muck in the shadows.

As Amore writes in an introduction to the show, the Mexicans “live in isolation and fear, unable to participate fully in life outside the farm.” Having entered the United States and journeyed to Vermont without authorization, they could be deported if found without the proper papers.

The show’s title, “Invisible Odysseys: Artwork By and About Mexican Farmworkers in Vermont,” is thus well chosen. Testimonies in Spanish and English accompany the work or are embedded in it; they typically tell of harrowing crossings, with desert trekkers dodging rattlesnakes and cactus thorns, as well as the U.S. Border Patrol.

“You can see skeletons in some places, human remains maybe of those who did not achieve their dreams; some end up lost,” the artist Ismael writes in a text alongside his diorama, “Crossing the Desert.”

Another artist, Z., stitches a similar commentary onto a small banner in her piece, “The Mirage of a Dream”: “Your path can take you through rivers, electric fences, tunnels or over walls. You are exposed to dangers there: snakebites, assaults or even loss of life. That’s why I’ve named it the ‘death crossing.’”

Ismael and Z., along with Poncho and Eli C.C. and all the other artists, have chosen to disguise their identities. The stakes are much higher for these Mexicans than for most artists who display work in a gallery anonymously. For the farmworkers, the consequence of being revealed could be a return to the poverty and hopelessness they have risked their lives to escape.

Many of the artists proclaim their joy at having made it to America: “The United States is always beautiful, a paradise, a dream, a mirage,” Z. testifies in her piece festooned with a dollar bill, toy soldiers with guns, a floating angel and a garland of plastic daisies, lilies and orchids. “It’s a garden of flowers for those who can enjoy it.”

This kind of visual and verbal dualism appears in many of the pieces. Despite the perils of their passages and the oppressive circumstances they encounter in Vermont, the artists often express gratitude to a country and a state that enables them to provide for their families back in Mexico. “Always working, my home is practically a jail,” Z. informs viewers. “But I am happy because I can earn money to send to my family … but I want a little freedom.”

The quality of work varies considerably. A few dioramas exhibit aesthetically ingenious touches, such as picket fences made of Popsicle sticks and scorpions fashioned from wire found on one of the farms. Others look like projects made in a middle-school art class.

Ismael’s piece is unusual, and striking, in its minimalism. “Crossing the Desert” consists only of sand, stones and bits of cactus set against a blue-sky backdrop and placed inside a box painted in the red, white and green of the Mexican flag. Most of the boxes, which stand on their sides, are crowded with kitcshy items and require close and lengthy inspection in order to absorb the diorama’s full narrative. An abundance of text accompanying each work further tests the viewer’s patience. Too bad the show doesn’t conform to the declaration at its outset: “The work itself speaks more than words.”

Amore, an immigrant from Italy, has two pieces of her own on display, along with a couple of constructions made by local activists Beatrice Parwatikar and Cheryl Connor. The entire exhibit reflects the title of one of these works, which features Connor’s small hooked rug depicting a Middlebury landscape. It’s called “Community Network of Compassion.”

By supplying basic materials and personal encouragement, the advocates made it possible for our voiceless neighbors to tell their stories. In many cases, it took months to build dioramas that are no larger than two feet long, two feet wide and a foot or so tall. McCandless, who has visited several farms where Mexicans work, says the artistic production took place on kitchen tables at the end of 16-hour work shifts, or on the one day off that some of the migrants are given every two weeks. The laborers were eager, she adds, “for the chance to create something distinct from the daily grind.”

The artists included in “Invisible Odysseys” work on farms throughout Vermont. And for every Vermont migrant worker’s story recounted at the Folklife Center, McCandless notes, scores more have yet to be told.