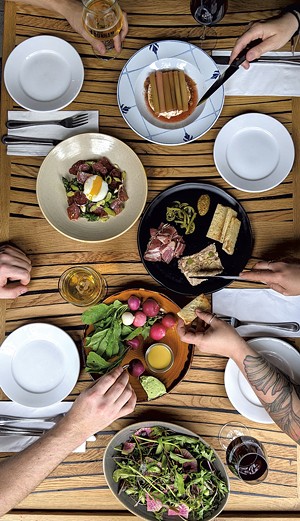 Most picnics are casual affairs. The one I had with four friends in June was anything but. These close friends live in Montréal; after the Canadian border was closed to most Americans for more than a year, I was desperate to see them again.

I scouted out the area around the Haskell Free Library & Opera House, which straddles Derby Line, Vt., and Stanstead, Québec. The affable border agent I consulted there told me that the authorities didn't prevent people from meeting up on the international border, as long as they didn't touch or exchange goods.

A few days later, I received a notification that the U.S. Department of Homeland Security had viewed my LinkedIn profile, which unsettled me; I'd never given the agent my name.

My friends and I were undeterred. A couple weeks later, we picnicked two meters apart on the library lawn, experiencing tears, laughter and no real hassle from border agents. Nonetheless, we felt the limits of not being able to embrace or clink our wine glasses with a proper santé.

When the Canadian government announced that vaccinated Americans would be able to drive into Canada for travel purposes as of August 9, I joined a cadre of Vermonters celebrating this new freedom.

Local foodies have been dreaming of a time when we'd once more be able to sample Indian street food in Québec, enjoy traditional dishes at a cabane à sucre in the Laurentian Mountains or shop at Montréal's Jean-Talon Market. Shoppers should know that Americans can still bring back personal amounts of most food from Canada, although many types of produce are not allowed across the border. (Check the USDA's website for details.)

For now, my friend Frédérique and I made a simple plan. She'd come down from Montréal, I'd drive up from Vermont, and we'd meet in the Eastern Townships for a day trip and a couple of meals. Finally.

Making the trip happen took serious planning because American citizens going to Canada for travel purposes have new hurdles to clear. They must show proof of having been fully vaccinated against COVID-19 at least two weeks before their crossing and proof of a negative COVID-19 test taken within 72 hours. These proofs and all travelers' arrival information (location, date and time of border crossing) must be uploaded to the Canadian government's ArriveCAN website or app within the 72 hours preceding their arrival.

Not knowing whether my results would come back in time, I scheduled my arrival for 71 hours after my test. I received the result by email after about 30 hours — but it listed my date of birth incorrectly.

I called the Vermont Department of Health to explain the situation and beg for assistance. By what felt like an incredible stroke of luck in the face of bureaucracy, I received an updated negative test result, with my correct birthday, in a few hours.

Americans traveling to Canada no longer have to quarantine there or need a plan to do so — technically. However, ArriveCAN won't let them complete the required pre-arrival information without including a detailed plan and an address for their potential quarantine. I FaceTimed Fred, and we came up with a plan that involved staying at her Montréal apartment should I come down with COVID-19-like symptoms.

Over a pale ale, we conversed with an intimacy and granularity that is only possible in person. tweet this

I packed the bottle of rhubarb wine I'd made for Fred, tuned my radio to Ici Radio-Canada and began the 55-minute drive to the West Berkshire-Frelighsburg border crossing.

Québécois radio and speaking to my dog in French are the main ways in which I've continued to practice the language. Although I've lost vocabulary over the pandemic, the radio maintains my cultural connection to the province where I lived for a year and a half a few years ago.

As I drove over the hills of Route 108, in the last 10 miles of Vermont, the radio played a song by a former Montréal neighbor of mine: "Travailleur Autonome," ("Freelancer") by Comment Debord. The melodious sing-along seemed auspicious.

Not normally one to feel nervous in the presence of law enforcement or border agents (yep, white, U.S.-born privilege), I nonetheless had a rumble in my stomach and shaky hands as I pulled up to the border station. I was the only traveler there.

Officer Grenier responded in kind to my greeting in French as I slipped him my passport and vaccination card. He asked me the usual questions and asked to see screenshots of my ArriveCAN confirmation and proof of my negative test.

He also confirmed that quarantine plans are no longer required to enter Canada and that the authorities are working on changing this language on ArriveCAN. Some Americans crossing the border for a day trip, Grenier said, have listed the addresses of grocery store destinations as their "quarantine sites"; for him, that sufficed. He noted that border agents always make the final decisions on which foreign nationals to allow into the country at their station. (U.S. policy is the same.)

Grenier finally bid me a bonne journée. Slightly in shock, I thanked him, pushed the button to change my speedometer from miles to kilometers and entered the land I'd sorely missed. Driving on QC-237, windows down, I hollered a series of "Woo-hoos!" like someone who should perhaps have been questioned more rigorously.

Fifteen minutes later, I pulled up to Fred's sister's home in Saint-Armand, delirious with happiness. I gave Fred an extended, teary Big American Hug, the chest-squishing type that Francophones who don't have American friends tend to find as awkward as many Americans find the French double-cheek-kiss greeting. She squeezed back, laughing.

Fred's 11-year-old niece, Anouk, gave us a walking tour of the quaint village and suggested a swimming hole in nearby Frelighsburg. Then it was time to eat.

Fred and I went to my favorite microbrewery in the Eastern Townships, Brasserie Dunham, and spent a languid lunch on the remodeled terrace, where old windows had been flipped on their sides and drilled into the middle of the picnic tables to separate parties.

Brasserie Dunham reopened early in the summer. Simon Gaudreault, co-owner of the brewery, said Québec had a "really intense and complete lockdown" that included a curfew and a prohibition of indoor dining for six months.

Pre-pandemic, the brewery had frequent international visitors, Gaudreault said. Since the border reopened, he's seen just a handful of Vermonters. "The Green Mountain State [license] plates are pretty easy to recognize," he said, noting an affinity between the craft beer and local food cultures of Québec and Vermont.

Fred and I shared fresh, crispy fries, agreeing not to double-dip in the homemade mayo. Over a light and lively session pale ale ($6.50 CDN) and an excellent guédille ($17 CDN), a brioche-like roll split and stuffed with tiny Nordic shrimp, we conversed with an intimacy and granularity that is only possible in person.

We spoke of relationships begun, ended and partially processed; of careers that finally felt stable and fulfilling; and of a sense of expansiveness after a long constriction. I bought a T-shirt from the brewery, wanting a tangible souvenir as I wondered how long the border would stay open.

Driving together through the Eastern Townships, Fred and I cooed over lovely houses. She and her sister said the region saw a dramatic increase in home sale prices during the pandemic. Rural poverty seemed far less visible there than in many Vermont border towns.

That day would have been the 39th birthday of the poet April Freely, a dear friend of mine and former program coordinator of the Vermont Studio Center, who passed in July. At Auberge Sutton Brouërie, we toasted to April, aware of the breadth of loss and depth of grief that so many have felt this past year and a half.

When we parted that evening, tired but full of warmth, I issued an earnest invitation to Fred's family to visit anytime. We had hoped that the land border might reopen to Canadians as soon as late August.

Back at the West Berkshire-Frelighsburg crossing, I waited at the closed gate for six stomach-churning minutes, wondering what was keeping me from being allowed back into my country. When I called the border station, the agent said that particular crossing had closed at 8 p.m. (A few other small crossings also now close early; check online to verify hours.) Driving to the Highgate Springs-St. Armand crossing, I decided that being stuck in Canada for an extra 20 minutes was a good problem to have.

Again, I was the only person crossing the border. The agent asked a few questions, handed back my passport and told me to have a good night. Three agents were milling around the closed entry lanes; I asked one of them whether he thought Canadians would be allowed in soon. Fred planned to come to Vermont the last weekend in August, when I wanted to throw a Happy Belated Everything party.

A week later, when the U.S. government announced our land border would remain closed to Canadians until at least September 21, I was already back in Montréal, meeting welcoming arms with rib-crushing hugs.