It's been great to cook so much this month, but it's also been strange to not eat at restaurants more often: Gahlord and I usually tend to go out a few times a week, for either breakfast or dinner. We did hit the town twice, though, since several area businesses stepped up to the Eat Local challenge by offering dishes that fit within the localvore guidelines. Some of our friends chronicled their field trip to Pizza on Earth in Charlotte, which was by all reports fabulous. American Flatbread (at least their Burlington location; I'm not sure about the Middlebury and Waitsfield "hearths") offered one veggie and one meat special throughout August. Unfortunately, American Flatbread couldn't get local flour in the commercial quantities necessary, and I was being a stickler for details, so I didn't try out their localvore 'za.

Gahlord and I visited Smokejacks on Church Street for dinner, toward the beginning of the month, and we each got the localvore entrée they've been featuring: a big steak from Laplatte River Angus Farm,  served with grilled tomatoes, zucchini and summer squash, and new potatoes. Our waiter was very helpful in finding out the sources of ingredients, and we talked about local vineyards quite a bit. I felt like a bit of a poser refusing the grainy goodness of the bread basket (not made with local flour), and asking whether the vinegar used in the dressing for a side salad was local (it wasn't, so I didn't get it). But apart from that, the meal was a hit. Everything was delicious. This photo doesn't really do it justice, but here's what my plate looked like halfway through, when I finally remembered to whip out my camera.

The other prepared-local-food offering we sampled was at Viva Espresso in Burlington's Old North End, this Tuesday. They've stocked locally grown peppermint tea all month, and at least one baked goodie per day made with all-local ingredients. Gahlord had an apple-cream-cheese square, and I got a rhubarb muffin. After sampling some of G.'s breakfast in the name of reportage, I can say both items were very tasty, though I found the muffin a bit sweet. 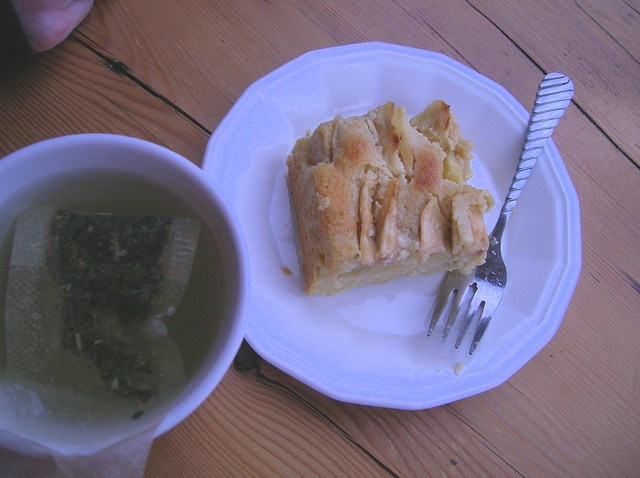 I have to admit I've run out of localvore steam the past few days. I've stuck with the challenge, but my time in the kitchen has been a bit uninspired: I haven't made many new dishes this week. Instead, I've stuck with standby preparations that I've made before: scrambled egg sandwiches, bean dishes, and leftovers from Sunday's corn-on-the-cob grillfest. Most lunches and a few dinners have been black beans with fresh tomatoes, some of the Red Hen localvore loaf, and the remainder of the wedge of Frog City Cheese I opened way back on the first of August (still perfectly OK). On a roll after the caramel popcorn, I did make honey-caramel-covered apple wedges on Tuesday night, and they were very tasty, if tooth-endangering. I just cooked the caramel a bit longer than in the popcorn recipe, and added a bit more salt. Leftovers were twisted into bits of wax paper, as a sort of butter-toffee candy.

Ah, sweet memories. Although today is the last day of the challenge, I'll follow up with a few wrap-up posts tomorrow and over the weekend, before putting this blog to bed. Also, look for an essay on my Eat Local experience in next week's edition of Seven Days.