Dining Out Lakeside at a Rooted Farmers & Foragers in Burlington 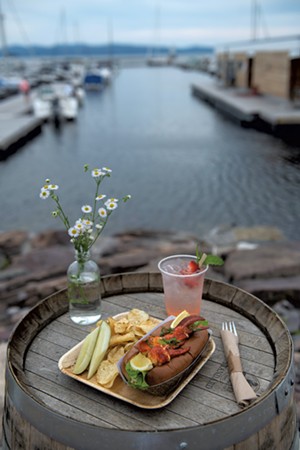 Waves lapped gently around boats tied up at the marina. Seagulls soared across a robin's egg-blue sky. My husband and I shared chunks of sweet Maine lobster on a griddled, buttery brioche bun and crunchy, fried Maryland softshell crab on a lightly sweet roll spread with Old Bay mayonnaise.

If not for the missing salty sea breeze, we might have been oceanside in either of those two crustacean-blessed states. Instead, we were seated at the Burlington Harbor Marina under the Farmers & Foragers Dockside tent on a beautiful early summer evening. The mellow notes of a local jazz quartet floated through the air as the sun set in shades that matched my strawberry-rhubarb gin and tonic from the full bar.

Co-owners and fiancés Solomon Bayer-Pacht and Lauren Johnson launched their Farmers & Foragers food truck in 2015 at the weekly South End Truck Stop. Since then, they've built up a busy traveling event-and-catering business. Last year, for the first time, they spent the whole summer parked in one spot: Burlington's newest lakefront marina, just south of the now-skeletal Moran Plant.

"I always wanted a waterfront restaurant." Solomon Bayer-Pacht tweet this

The plan predates the pandemic. The marina's website featured a photo of the Farmers & Foragers food truck even before the owners approached Bayer-Pacht, 31, and Johnson, 30, the couple said with amusement.

"They see this as an amenity. We deliver food to the boats," Bayer-Pacht said during a midweek interview seated at a back corner table. It was midafternoon, and a smattering of customers grazed on truffle fries ($9) and cheesesteaks ($17) under the elegant peaked tent supported by wooden posts. 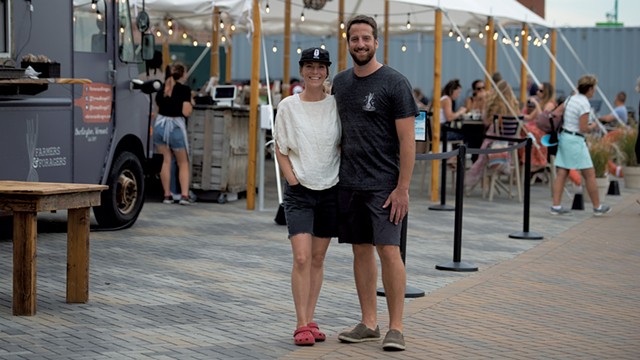 For their part, the couple saw the marina as a growth opportunity. "If we can get the truck to a permanent location, it lets us create our own environment, and it gives stability," Bayer-Pacht explained. "You can't scale a business when trucks catch on fire on the way to an event." (More on that fire shortly.)

There are many reasons to start a food truck instead of a brick-and-mortar restaurant: lower overhead and staffing costs, freedom from long-term leases, flexibility to follow the customers. But Bayer-Pacht did it for love.

Both University of Vermont alums, he and Johnson didn't meet until after graduation, in 2014, when they were coworkers at Hotel Vermont.

By that time, Bayer-Pacht, a Hinesburg native, had spent two years at Temple University in Philadelphia and had studied in Washington, D.C., and Barcelona. Having traveled and lived elsewhere, "I knew I wanted to start this life here," he said.

"I had all these ideas for bars and restaurants," he continued, listing off a rooftop bar and a combination sports bar and Jewish deli. "It's about creating something. I love to host. It's energizing for me."

Johnson, who grew up in Maryland crabbing with her grandfather, was looking for jobs out of state where she could apply her environmental science degree.

"And I was trying to figure out ways to keep her here," Bayer-Pacht recalled with a laugh. But, "at age 23, opening a bar with me was a little bit over the top," he acknowledged. 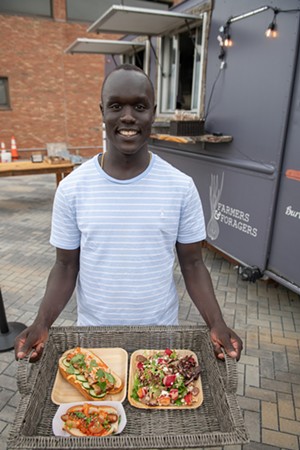 When a customer at Hotel Vermont suggested a food truck, Bayer-Pacht was intrigued, and Johnson decided she was amenable to something mobile and flexible. "I always really enjoyed the restaurant industry," she said. "I'm excited about new flavors and passionate about cooking."

That first truck-stop summer, Farmers & Foragers became known for its cheesesteaks; on busy nights, the couple served 100 to 125 of them. "It was our stake in the ground," Bayer-Pacht quipped.

While in Philadelphia, Bayer-Pacht had been a regular at Jim's South St., one of the city's vaunted cheesesteak destinations. He developed strong opinions on what makes a good one: lots of onions; the right beef; a soft, warm bun; and white American cheese. Green pepper is optional but "adds tang," he said.

To make all those cheesesteaks, Bayer-Pacht said he hand-sliced at least a thousand top rounds from Cambridge's Boyden Farm. "I think I've spent months of my life slicing steaks at 3 a.m.," he said ruefully — "until we got smarter about using equipment."

The couple believes in as much local sourcing as possible, but Bayer-Pacht said they had to make a concession for the cheesesteak cheese. "We tried every fancy Vermont cheese. It just didn't work."

On top of the truck stop, "We were doing dog shows in Stowe, all the events no one else wanted to do — just saying yes to everything," Bayer-Pacht said.

Farmers & Foragers got on the approved UVM campus truck list and started catering, adding a second truck in year three to handle the extra business. "We were doing double-wedding weekends," Bayer-Pacht said.

It was on the way to a wedding in Greensboro that one of the trucks caught fire. No one was hurt, but the Farmers & Foragers team had to rush out the second truck and unload and reload everything. "We got there. We served on time," Bayer-Pacht said. "No one at the wedding even knew."

Even without emergency swaps, all the schlepping was getting old, and when the marina opportunity came up, it appealed. "I always wanted a waterfront restaurant," Bayer-Pacht said, noting that Burlington could use more lakeside dining.

This past winter, Farmers & Foragers landed a second long-term spot: at Stowe's Lodge at Spruce Peak for the ski season. The two locations combined provide year-round business, and continued limited catering has enabled the couple to maintain a core crew, which expands to 14 or 15 employees for the summer.

Farmers & Foragers' main chef, Joe Kulacz, has been with the company for three years. The other lead chef, Gerber Rodriguez, joined in 2020 after he and a co-owner closed their Esperanza Restaurante in Burlington.

Farmers & Foragers customers can taste the results. Kulacz, who is from Maine, added the brown butter that takes the lobster roll a step up. Its cost varies with the market price for fresh lobster and was $30 on a recent visit. On the other end of the menu at $8 is a kimchi hot dog topped with a former longtime employee's kicky kimchi recipe.

Rodriguez added curtido, a pickled-vegetable recipe from his native El Salvador, to the food truck's signature fried-perch tacos. He also uses it in the breakfast burrito, for which he makes chorizo.

The parsley, dill and cilantro that turn Farmers & Foragers' falafel bright green are also local. "We use a ton," Johnson said, "and I toast the cumin and coriander whole and grind them." That pita sandwich ($15), topped with a garlicky yogurt tzatziki sauce, house-pickled red onion, tomatoes and cucumbers, is one of Johnson's favorite menu items.

"I love the tang of the tzatziki, the herby falafel and the sweetness of the onion," she said, nailing what makes the falafel successful in this reporter's opinion. (Johnson also confided that she enjoys her cheesesteak on a pita with tzatziki and "tons of caramelized onions." I see a special request in my future.)

Another favorite of Johnson's is the Key lime pie, which sells briskly in individual four-ounce jarred portions ($8). She makes the crust with brown butter, coconut and graham cracker crumbs and tops it with a just-tart-enough Key lime layer.

Currently, the staff cooks hot food to order in the truck with components prepped in Farmers & Foragers' South Burlington commercial kitchen. But as the summer heats up, the team will soon have more prep space at the marina: a new cook tent to prepare cold foods such as raw oysters, fresh seafood ceviche and vegetarian summer rolls with spicy peanut dipping sauce, an original truck-stop favorite.

Through early October (weather permitting), Farmers & Foragers Dockside will remain open for lunch and dinner Wednesday through Saturday, 11 a.m. to 9 p.m., and for Sunday brunch, 10 a.m. to 3 p.m. Johnson strongly recommends reservations; walk-in seats are scarce, especially in the evenings.

The truck also offers takeout orders, and diners will find a number of nice spots to eat nearby. Place those orders ahead online, Johnson suggested (except for brunch, which must be ordered in person).

The tent was hopping at a recent Sunday brunch during my second visit; guests were arriving by bike, boat and even paddleboard. Our party of four parked near the skate park, then settled in to enjoy the view and Bloody Marys crowned with pickled vegetables and add-on bacon ($12).

Our meal had plenty of highlights, including another lobster roll. The brunch version of an excellent localized bánh mì sandwich ($15) featured thick, well-crisped pork belly, pickled daikon and carrots, Sriracha mayonnaise, and a fried egg. A pair of lake-perch tacos ($12) came with chipotle crème fraîche, corn salsa and Rodriguez's snappy curtido, nestled in sturdy heirloom corn tortillas from All Souls Tortilleria in Burlington.

The picture-perfect setting felt like vacation, and the crisp fried perch were as local as fish gets in Vermont, fished last winter from the body of water mere feet away. We hardly missed the ocean.

Dining Out is a series that explores Vermont's al fresco finest. Follow along this summer as we highlight the restaurant decks, patios and picnic tables that give new meaning to going out to eat.

The original print version of this article was headlined "Truck, Stopped | Dining out lakeside at a rooted Farmers & Foragers"