Dining Out at Lazy Breeze Farm’s Burger Buggy in Waltham 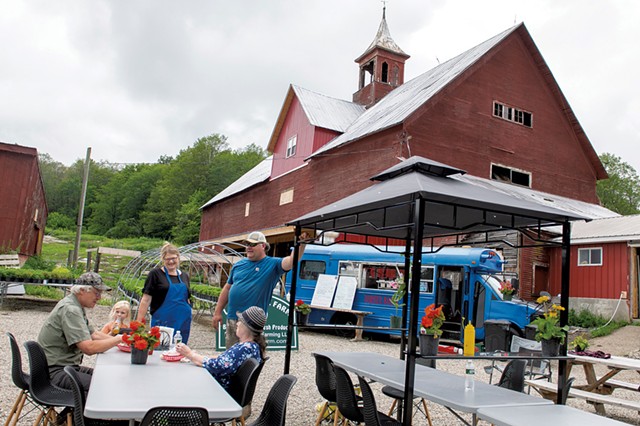 But why settle for farm-to-table when farm-with-table is an option? As farmers look to diversify their offerings — and compensate for the pandemic-era reduction in sales to some of those farm-to-table restaurants — more and more are cooking meals right on the farm.

Lazy Breeze Farm is a Waltham beef operation tucked between Route 7 and the grounds of Addison County Fair & Field Days. In May, the Newton family opened an on-farm food truck as a way to let customers sample the wares. And, boy, was I glad they did when I stopped by on a recent Sunday afternoon.

"It's such a huge part of Vermont history." Diana Newton tweet this

The farm announces its presence with a grand, historic red barn, which holds court at the back of the property. Once I stopped gawking at its scale — two stories at least, topped with a cupola — I could focus on what we were there for: a bright-blue bus the Newtons have dubbed the Burger Buggy.

Brent and Diana Newton bought the farm on Burnham Road in August 2020 — they live on an adjacent parcel down the road — and they've been renovating the property and developing their business model ever since. As impressive as the old barn is, it was more of a bonus feature than a deciding factor.

"A lot of people would have bought that property just for that piece of it, and it really wasn't about that for us," said Diana, 49. The couple needed a functional shelter to house their growing herd of grass-fed beef cows over the winter, and the property also has a more modern barn that fits the bill. They tackled that building first, renovating it inside and out and adding a new water system, open feeding areas and fresh green siding.

The Newtons got their first cows about four years ago. "My father-in-law [Craig Newton] and my husband thought it would be great to look out the window and see some cows," Diana said. They started with seven Red Angus, planning to raise them to feed their family.

"Then Brent decided to get in the beef business, and it grew really quickly," she added with a laugh.

Now Lazy Breeze sells cuts of beef — from brisket and short ribs to hamburger and strip steak — directly from the farm. The herd numbers 142 cattle, mostly American Aberdeen Lowline Angus with a few Red Angus and Herefords mixed in — and two Wagyu bulls.

"We did some research and read that the Wagyu-Aberdeen Angus mix was very popular, and good not just for taste and quality but for the marbling of the meat," Diana explained. 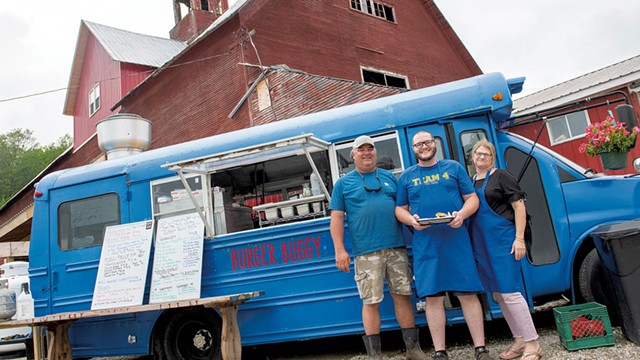 The idea of the Burger Buggy came to Brent, 51, one March morning over coffee.

"We were just playing on our phones, and he said to me, 'You know, it would be a good idea if people could taste the meat in order to know how good it is,'" Diana recalled. "I looked at him like, 'Yeah. Whatever, honey.'"

Brent suggested a food truck with a simple menu of burgers and fries. Once again, Diana said, "Yeah. Whatever, honey." Ten minutes later, he showed her a food truck on Craigslist.

"All of a sudden I went from 'Yeah, honey' to paying much more attention," she said, laughing heartily.

The Burger Buggy opened a couple months later, on Mother's Day weekend. The couple's son, Alex, 28, is the cook. Both Brent and Alex are former Addison County sheriffs — Brent a captain and Alex a deputy.

"Alex was looking for something new, and he had been helping on the farm," Diana said. "He has always really wanted to cook, so he agreed to do it and started researching how to make amazing fries."

It's been a long time since I was surprised by a French fry. But the fries that Alex serves from the Burger Buggy caught me off guard in more ways than one. They're hand-cut, blanched and then double-fried, achieving the ideal crisp-on-the-outside, fluffy-on-the-inside balance. They're also uniquely sized, sitting in a satisfying place between a regular fry and a potato wedge.

"I learned how to make them on YouTube," Alex said.

I guess if you can learn to build a house by watching YouTube videos, why not French fries?

My first few bites of the excellent fries were a good sign of things to come. They were part of my patty melt meal ($12), which also came with a drink. The patty melt itself was a gooey delight — basically a burger patty inside a grilled cheese, as Diana explained it. I opted for cheddar, adding pickles from the list of toppings included at no extra charge.

Two of my dining companions ordered the Big Bull burger ($12; $15 for a meal), which is a double patty. The burgers were serious, and the satisfied silence in the spacious tent where we sat was broken only by occasional "yums" and "Dude, this is so good."

The menu also includes smaller burgers; cheesesteaks with sautéed onions, peppers and mushrooms; cheesy fries; and poutine. Diana helps out with specials here and there, she said, including brisket and ribs with mac and cheese. The day we visited, the special was a strip-steak dinner ($22) with a choice of sides.

We had one vegetarian with us — probably not the best customer for a beef farm's food truck. But she happily ate a grilled cheese and fries before wandering over to make friends with Thaddeus, the farm's bottle-fed calf. Led by Brent, he strolled by while we were stuffing our faces with burgers.

Everything at the Burger Buggy is made to order, so we had time to commune with the farm's goats, alpacas and pigs while we waited for our food. With a swing set to play on and animals to pet, the farm offers a family-friendly experience even when the Newtons are busy. For those who'd rather not linger, call-ahead ordering and takeout are also available.

"Alex said to me, 'Mom, it's a food truck. You either get fast food, or you get great food,'" Diana said. "It's been amazing to see all these families come to a casual farm-type environment and just relax and enjoy the atmosphere."

The Newtons are in the process of renovating their 100-by-48-foot, two-and-a-half-story historic barn, which was built in 1878 by Harry Everts to house his dairy operation, according to the Vermont State Register of Historic Places. It hasn't seen regular use since the 1970s. Last winter, the Newtons added interior staircases, fixed the dormer — which was in danger of collapsing — cleared nearly a foot of hay from the second-story floor, and added interior supports. A full renovation will be a long process, but it's one they're ready to tackle.

"It's just such a huge part of Vermont history," Diana said.

The next step in the evolution of Lazy Breeze is a covered deck, which will create more seating options and extend the Burger Buggy's season. Right now, the Newtons plan to keep the truck open as long as the weather allows. They're working on getting a license to sell beer and wine. Next year, they hope to expand the truck with a bigger kitchen, which will let them expand the menu, too.

"I know I should tell you the most fulfilling part is seeing it busy or selling our meat, because we're in business to make money someday," Diana said. "But the coolest part is meeting my neighbors and hearing all kinds of stories, all kinds of history, from people who have been watching the farm through the years."

With burgers and fries as good as the Newtons are making, even more people will be watching Lazy Breeze Farm as it heads into its next chapter.

Dining Out is a series that explores Vermont's al fresco finest. Follow along this summer as we highlight the restaurant decks, patios and picnic tables that give new meaning to going out to eat.