Dining on a Dime: The Crooked Ram 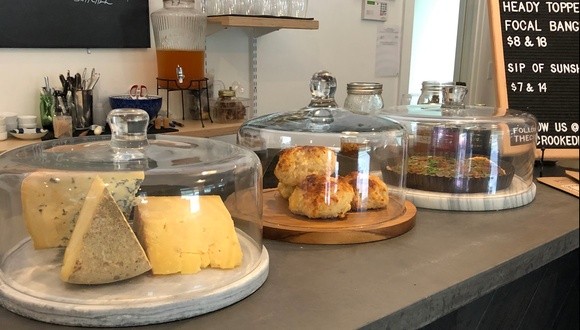 What’s the going rate for 26 pounds of honey? At the Crooked Ram in Manchester, it’s a whole lot of store credit. And while that’s not how I paid for this Dining on a Dime adventure, if I ever come into a windfall of the sweet stuff, I know where I’ll spend it.


The taproom on Manchester’s main drag is a drinking destination — the only place in town dedicated to craft beer, cider and natural wine — and it doesn’t take much to be a regular.

“Most of our customers are from out of state,” said owner Peter Campbell. I’m no local to southern Vermont, but Campbell remembered me from my first visit a few months before. We’d ranted about the lack of beverage producers in Bennington County while I stood at the bar sipping a glass of Fable Farm Fermentory’s Fluxion III. This time, though, I was focused on eating, not ranting.


The Crooked Ram opened in early 2017 as a bottle shop, but during its annual “Mud Season Break” last year, Campbell renovated the space to offer on-premise consumption and a perfect-for-drinking food menu.

“We have limited room, so we’re just serving what we really love,” he said, pointing to the tiny kitchen hidden behind a stack of kegs. The chalkboard lists a selection of local cheese and charcuterie, classic bar snacks and a few heftier lunch items.


I ordered the housemade cheese scone, paired with smoked ham and fermented garlic honey ($9). The honey made my decision for me, after Campbell poured me a spoonful to taste. “One of the neighboring farmers showed up with 26 pounds of the stuff, all in huge mason jars,” he explained. The farmer meant it as a gift, but Campbell insisted on paying him in IPAs.

Like any good fermentation fanatic, Campbell added garlic and let it bubble away. The result was a savory-sweet shock, all garlic on the nose and mellow honey in the finish. It could have been an at-home cold remedy, and I wanted more of it immediately.


I spotted a sheepskin-laden bench in the open dining area and settled in. My meal arrived on a board; the scone, a hearty pile of ham, and the mystical honey were lined up and ready for me to DIY. As far as scones go, Campbell clarified that “it’s really one foot in scone and one foot in biscuit.”

Semantics aside, it was warm, and a perfectly melty combination of King Arthur Flour, buttermilk and Jasper Hill Farm’s Melting Blend. The ham, sourced from the Vermont Butcher Shop just down the street, was brined for seven days and smoked in-house. It could have passed for brisket with its dark, crispy edges. I slathered the scone with honey, slapped on a piece of ham, and marveled at its power to really make me want a beer. Thankfully, I was in the right place.